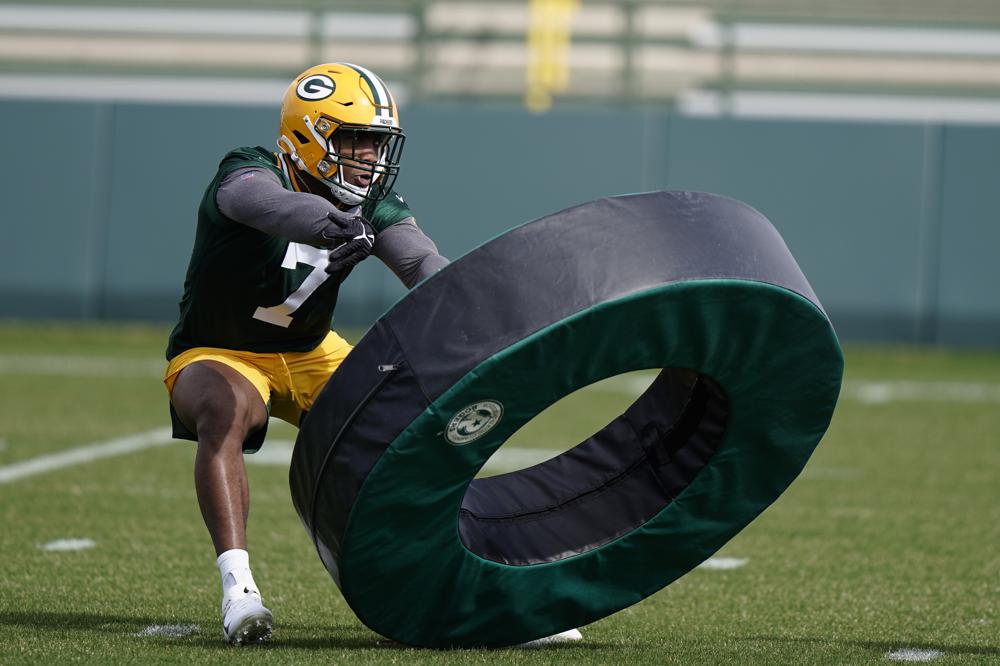 GREEN BAY, Wis. (AP) — As they chase their fourth consecutive NFC North title and first Super Bowl berth in more than a decade, the Green Bay Packers may rely on a different formula than usual.

The trade of All-Pro receiver Davante Adams could force the Packers to lean more on a defense that returned most of its top playmakers and added two first-round draft picks. That defense aims to take some of the pressure off reigning MVP quarterback Aaron Rodgers and help him earn his second Super Bowl berth.

“When you have a quarterback like we have, if we keep doing our job building on defense, our mindset is that we want to win a world title,” defensive coordinator Joe Barry said Tuesday. “We want to win a championship. That’s the mindset we have every single day when we walk into this building.”

The Packers ranked ninth in total defense and tied for 13th in scoring defense last year in Barry’s first season as coordinator, but their playoff performance offered an indication they’re capable of accomplishing much more.

Green Bay’s defense didn’t allow a single touchdown in a 13-10 divisional playoff loss to the San Francisco 49ers, who reached the end zone only on a blocked punt return.

The Packers have spent the offseason adding to that defense while losing one of their top playmakers on offense with Adams now in Las Vegas.

All-Pro linebacker De’Vondre Campbell and cornerback Rasul Douglas earned new contracts after delivering breakthrough performances in their debut seasons in Green Bay. The Packers reached a contract extension with outside linebacker Preston Smith and signed free-agent tackle Jarran Reed, who has 24 1/2 sacks in five seasons with the Seattle Seahawks (2017-20) and Kansas City Chiefs (2021).

The Packers then used both of their first-round picks on defense by taking a pair of Georgia teammates, with linebacker Quay Walker going 22nd overall and tackle Devonte Wyatt getting taken 28th.

Walker said last week at the team’s rookie minicamp he already was looking forward to working with Barry, who came to Green Bay after four seasons as the Los Angeles Rams linebackers coach. Barry’s background includes two unsuccessful stints as an NFL defensive coordinator at Detroit (2007-08) and Washington (2015-16), but he earned praise from Green Bay’s players last season for the energy he brought to the defense.

“Coach Joe B, he’s everything and more,” Walker said at the rookie minicamp earlier this month.

Green Bay does lack pass-rushing depth after releasing Za’Darius Smith, who had a combined 26 sacks for the Packers from 2019-20 and is now with the Minnesota Vikings. But they played most of last season without him already, as he played only one regular-season game and one playoff game because of a back injury.

The Packers also should get a boost from the return of star cornerback Jaire Alexander, who injured his right shoulder in early October and didn’t return until the playoffs.

“No one really realizes what he did just to get back for us for the playoff game because he had a major injury,” Barry said. “A lot of guys would have just cashed it in and said, ‘Hey, I’ll see you in May.’ He busted his butt to get back and really was not 100%. He played his butt off in that playoff game.”

The return of Alexander, the addition of two first-round picks and the signings of Campbell and Douglas have produced the rare Green Bay offseason in which fans are nearly as enthusiastic about the defense as the offense.

Of course, that also creates heightened expectations. Packers coach Matt LaFleur acknowledged after the draft that he’s excited about the looks of his defense but noted there’s still plenty of work to do.

“Nothing’s guaranteed,” LaFleur said after the draft. “You can’t take anything for granted. You’ve got to work for it. It’s going to be how our guys come together, how they come back, how they come to work.”