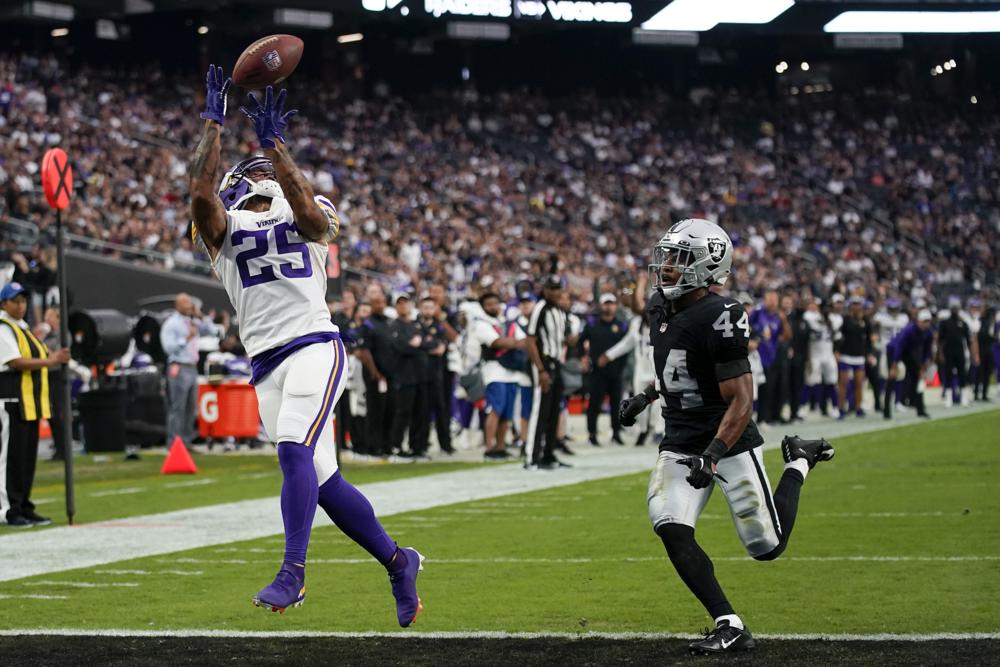 LAS VEGAS (AP) — One of the biggest questions facing Las Vegas Raiders first-year coach Josh McDaniels was where he would find the right pieces for his offensive line.

McDaniels may not have all the answers after a 26-20 preseason win over the Minnesota Vikings on Sunday, but he’s pleased with what he’s seen in two preseason games.

“I think we have some depth at tackle and some competition,” McDaniels said. “We’ve told them since the first day they got here that this was going to be a situation where guys earn their opportunities and they’ll determine their role.”

Using numerous rotations for nearly every offensive series, the Raiders (2-0) were able to sustain second-half drives of 10 and 15 plays, both resulting in touchdowns, to seize control of the game and keep Minnesota (0-1) at arm’s length.

“We talked a lot about being productive on first down,” said quarterback Nick Mullens, who completed 7 of 9 passes for 94 yards and one touchdown. “And I think if you just look at the stats overall in the NFL, if you’re productive on first down it’s going to keep you on schedule to establish good drives. Everybody banded together, our O-line did a really good job, we ran the ball, and played productive as a unit.”

“You got so many different guys on the O-line group right now, kind of rotating through, so you got to kind of get used to everyone because not everyone fits rotations and double-teams the same,” center Andre James said. “It’s good to get this in right now and learn how everyone’s fitting in.”

The Raiders finished with 300 yards of offense, and an average of 4.3 yards per play, with starter Jarrett Stidham completing 10 of his 15 passes for 68 yards. He also ran for 16 yards on four carries, including a touchdown. Chase Garbers finished the game under center for the Raiders and was 2 for 3 through the air for 19 yards. Brittain Brown ran for 54 yards on 14 carries, including one touchdown.

Kellen Mond threw for 119 yards on nine completions, including two touchdowns, for the Vikings in their preseason opener. Sean Mannion finished 8 of 12 for 79 yards.

“There was a lot of really, really positive things that I took out of it across the board,” Vikings coach Kevin O’Connell said. “I thought our run game and some of our physicality I saw up front were real positives. We’re obviously allowing these quarterbacks to compete, so sometimes we may feature a little bit more in the pass game to see kind of how those guys do in certain normal-down situations.”

The Vikings were penalized eight times for 71 yards, including seven infractions for 66 yards in the first half.

Raiders owner Mark Davis and tight end Darren Waller, who hasn’t practiced since July 30, were in attendance at Sunday’s WNBA game between the Las Vegas Aces and Seattle Storm across Interstate 15 from Allegiant Stadium, at Mandalay Bay. The Aces’ 109-100 win sealed the No. 1 overall seed for the upcoming playoffs. The WNBA game ended just before halftime of the Raiders game, so it’s likely both Davis and Waller made it in time for the second half.

“I think he was over there before our game started, which is, I understand that. He wasn’t going to play today, so, I don’t want to make more of that than it was,” McDaniels said of Waller not being at Allegiant for the entire game.

Vikings: QB Kirk Cousins tested positive for COVID-19 earlier in the week and did not travel with the team. The Vikings’ next practice is Tuesday, putting Cousins on track to return to the field then.

Raiders: DE Malcolm Koonce was shaken up during the first quarter, but later returned to play.

0
0   0
previous Wainwright goes 9 for Cards, but Brewers win it in 10th, 3-2
next Pujols homers twice to help Cardinals knock off Brewers 6-3
Related Posts