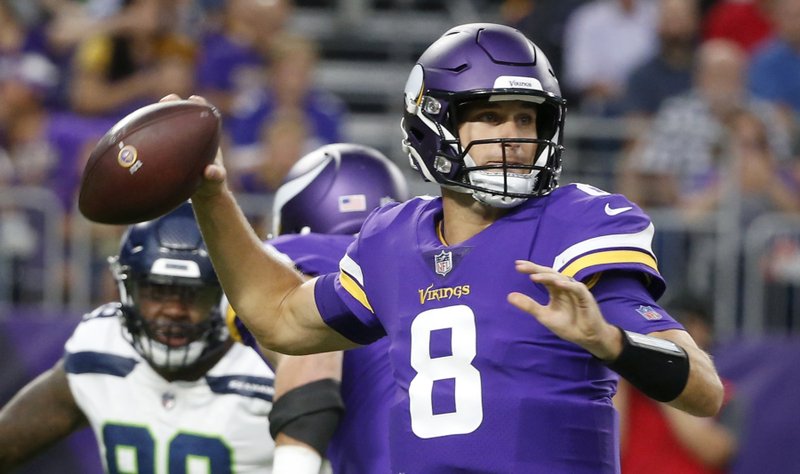 EAGAN, Minn. (AP) — Kirk Cousins took some significant strides last season as Minnesota’s quarterback, progress that still might need a repeat if the Vikings are going stay in the championship chase.

The next step in his development? Literally, taking off.

“I wouldn’t say take more chances. Just if we get man coverage and the pocket breaks down, being ready to take off and run and become more of a scrambler,” said Cousins, who has begun his ninth year in the NFL and his third with the Vikings.

“If we’re off schedule, get out of the pocket and make a play that’s kind of drawn up in the dirt. That’s just one place to begin, but I think that’s probably the biggest place to focus.”

Cousins has never been much of a scrambler, with only 509 yards rushing over five full seasons as a starter. Last year, he took off only 31 times and gained 63 yards, ranking 23rd and 31st in the league in those categories, respectively. He’s not immobile, though, and a tendency to hold on to the ball too long in search of the perfect throw has cost his team at times in the form of a deep sack. Third-and-18 is a consistently disadvantageous down-and-distance situation for any quarterback, no matter his ability, experience or support.

Minnesota’s decisive defeat in the divisional round of the playoffs last winter at San Francisco underscored this importance of being more willing to bag a called pass in favor of an open run. Cousins took six sacks against the 49ers for a loss of 46 yards.

“I felt like we got a lot of man coverage in that game, and I really needed to take off and run,” said Cousins, who turned 32 on Wednesday.

There’s been no advice for Cousins in this area that has carried more weight than that of one of the best running quarterbacks in NFL history. Fran Tarkenton, the only quarterback in the Pro Football Hall of Fame who primarily played for the Vikings in his career, has connected with Cousins several times over the past two years and taken advantage of the audience to deliver the message.

“Fran’s right. I do need to run more. I have an athleticism there that I don’t know that I tap into enough,” Cousins said, adding: “The challenge is, with a red jersey on in practice, it’s really hard to know when you were tackled, when you were sacked and when you’re still scrambling. But I’d like to add that to my game and try to work on that the best I can, as hard as it is.”

There’s always a balance, of course.

“If you look to go run the ball, then you’re going to miss open receivers, and you can’t guess. So you have to truly train that instinct that when the play breaks down, take off and run,” Cousins said.

The newest generation of NFL quarterbacks headlined by Patrick Mahomes and Lamar Jackson has an elusiveness that Cousins does not pretend to have, of course, and the backbone of his skill set will always be with his accuracy.

“He does an amazing job of delivering the ball,” tight end Irv Smith Jr. said. “He always has.”

0
0   0
previous Maeda’s no-hitter ends in 9th, as Twins top Brewers in 12
next My fantasy freak out!
Related Posts