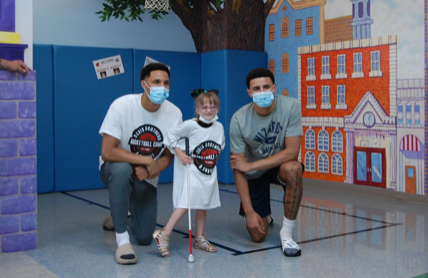 One’s a Wisconsins Badger, the other’s in the NBA.

Both were in their hometown of La Crosse on Wednesday, meeting with kids of the Children’s Miracle Network’s Heroes, shooting some hoops and signing autographs.

Twin brothers, Johnny and Jordan Davis, found out some kids couldn’t go to their Central High School youth basketball camp this week, so they decided to make an extra stop at the pediatric oncology unit at Gundersen Heath System.

Armed with three different sized balls, for all ages and abilities, the Davis brothers — Johnny, recently drafted No. 10 overall by the Washington Wizards, Jordan heading into junior year with the Badgers — helped the kids improve their skills.

At one point Jordan lifted one little girl up to the net for a slam dunk, while Johnny helped another boy with down syndrome dribble.

Some of the kids are patients at the hospital, others are this year’s Children’s Miracle Network’s Heroes.

These kids are selected to spend the year attending events and fundraisers, telling their stories about how they have benefited from the organization.

They got to spend the afternoon challenging the Davis brothers to shoot offs, getting pictures and getting a signed handprint of each of the brothers.

“Their hands are huge,” 12-year-old Cameron Howe giggled, holding up the handprints.

For Jedi Schaller, this day was full of excitement. Not only did he and his brothers get to take on the Davis stars, but he had just received word that his scans and blood work were in the clear, and his Stage 4 Non-Hodgkin’s Lymphoma was gone.

“Me and my family have been watching both of them for a really long time so it was really exciting to come and meet them,” Schaller exclaimed. “It’s been a really crazy day.”

The brothers said they wanted to inspire kids and teach them that you don’t have to compete to love basketball.

“It’s great to be able to come in here and shoot hoops with the kids, make them smile,” Johnny Davis said. “Just give them a little bit of support when they’re going through some struggling and difficult times.”