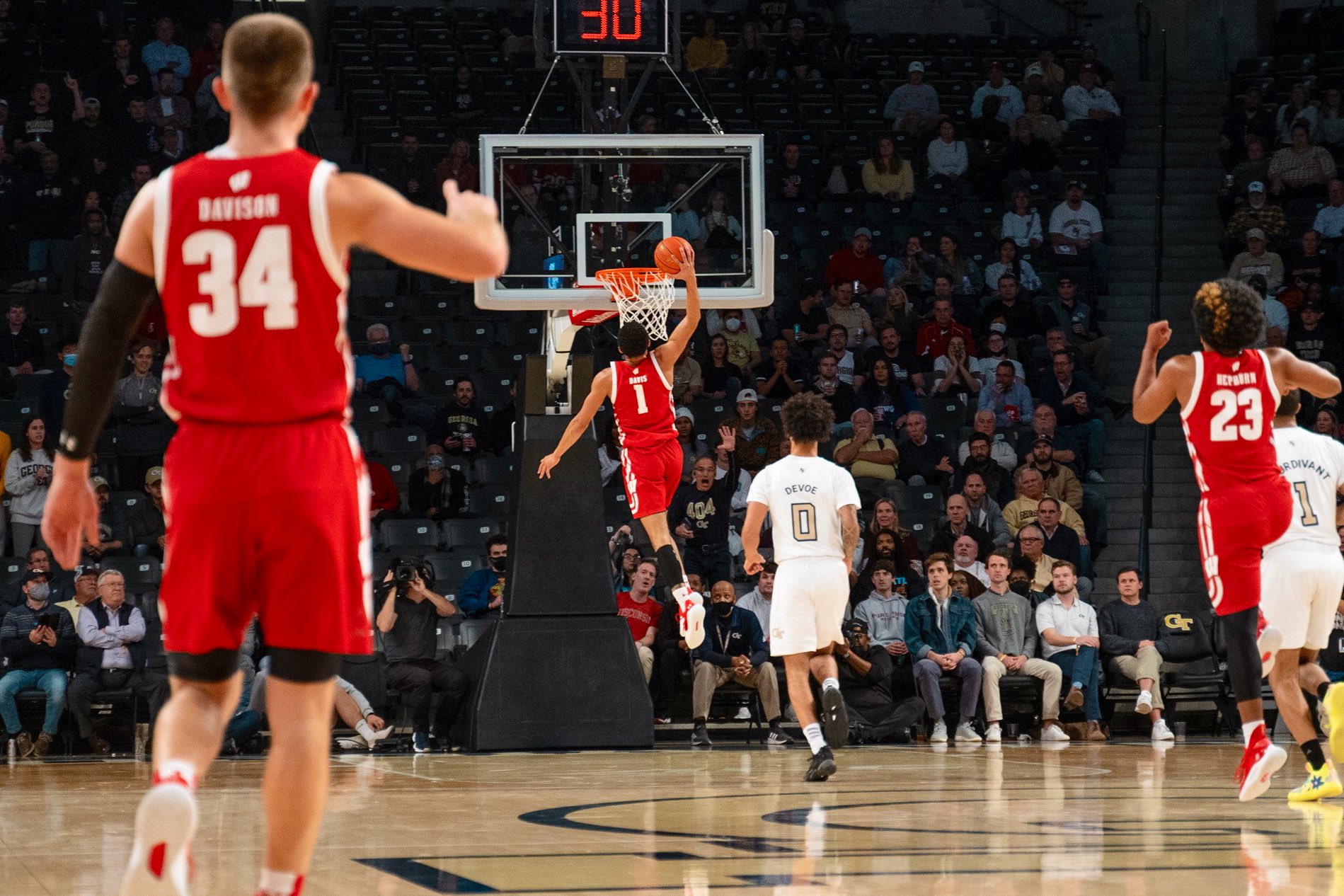 Wisconsin’s Johnny Davis spent his freshman year coming off the bench and playing a supporting role for a senior-laden team.

The La Crosse native is now the Badgers’ featured performer and making the most of his opportunity, while catching the attention of NBA scouts.

For now, he’s helping Wisconsin overcome the loss of all those seniors and emerge as a legitimate Big Ten contender.

“I think we can be in the conversation for Big Ten champions,” Davis said.

The 6-foot-5 guard already was garnering attention as a future first-round pick before producing of the greatest regular-season performances in UW history on Monday.

Davis was the first Division I player to lead his team in all five categories in a road win over a top-five foe since Tim Duncan did it for Wake Forest against Maryland on Feb. 1, 1997.

“He’s the definition of a two-way player, all right,” Purdue coach Matt Painter said after the game. “He’s giving the same amount of effort on the defensive end. He gets deflections. He gets blocks. He takes on challenges. And then offensively, it speaks for itself. He’s a fabulous player. He’s got a bright future. I would like to be his agent.”

Davis is scoring 22.3 points per game — ranking him third among all Division I players. The sophomore plays his best against the toughest competition, as he’s averaging 30.3 points against ranked teams.

Davis has benefited from an offseason that included helping the U.S. team win a gold medal at the FIBA U19 World Cup this summer. He came back looking like an entirely different player.

“If you look back, even watching film from last year, he has more explosiveness,” Wisconsin coach Greg Gard said. “He’s stronger. I compare him kind of to a running back getting through the hole, with the pop he has off the floor. A lot of that has to do with him improving himself physically.”

STRENGTHS: Davis has the ability to create his own shot or set up his teammates. He’s emerged as one of the nation’s most dynamic scorers this season, and he also plays quality defense. He improved his strength during the offseason.

WEAKNESSES: ESPN analyst Fran Fraschilla says Davis’ creativity off the dribble is an area that he can improve on. Davis’ stock has risen sharply based on his play over the last two months. He still must show he can maintain this type of production over an entire season.

DRAFT PROJECTION: He’s playing his way into the lottery.

Other prospects around the Big Ten:

G JADEN IVEY, PURDUE: If Ivey chooses to turn pro after his sophomore season, he’s expected to be one of the first guards selected. The 6-4 shooting guard is averaging 16.5 points and 4.9 rebounds while shooting 51.7% overall and 44.8% from 3-point range.

F E.J. LIDDELL, OHIO STATE: Liddell, a 6-7 junior, shot just 2 of 14 in an overtime victory at Nebraska on Sunday – the 13th-ranked Buckeyes’ first game since Dec. 11 due to a pandemic-related pause – but had been playing very well before that game. He earned first-team all-Big Ten honors last season and is averaging 19.6 points and 7.3 rebounds this season.

F KEEGAN MURRAY, IOWA: The 6-8 sophomore leads the nation with 24.5 points per game and already is a three-time Big Ten player of the week. Two of the three top Division I scorers will be on the floor Thursday when Murray’s Hawkeyes face Davis’ Badgers at Wisconsin.

TOP PHOTO: FILE – Johnny Davis finishes off a steal with this dunk in the first half of the Wisconsin-Georgia Tech game in Atlanta, GA on Dec. 12, 2021. PHOTO: UWBadgers.com