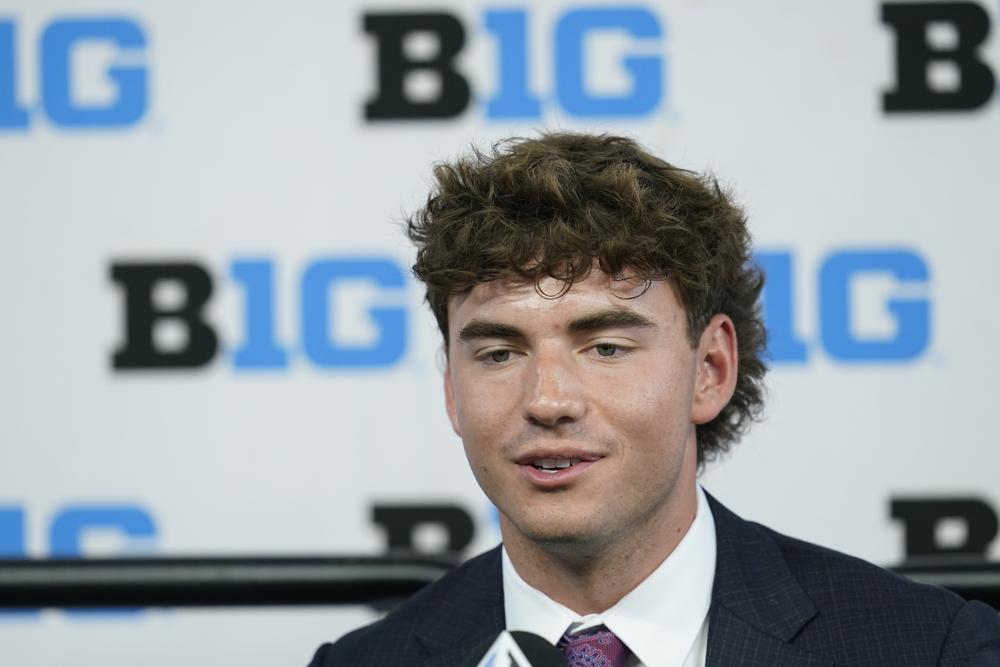 INDIANAPOLIS (AP) — The story of Sean Clifford and Tanner Morgan’s began on a seventh-grade football field.

In between, the two quarterbacks followed one another’s journeys through high school and the recruiting process, the natural ups and downs of college football and the COVID-19 pandemic. Now, they’re embarking on one final destination together — a sixth and final college season.

“To think that both of us, with our old asses, are still playing on the biggest stages, it’s very cool because that friendship is so deep,” Clifford said Wednesday at the Big Ten media day. “We’re still playing at the highest level and now getting to play Tanner this year, it’s going to be a lot of fun.”

Both enter the fall with plenty of unfulfilled goals.

Clifford begins his fourth season as Penn State’s starter at age 24, as the new face of a national movement to help college football players and as the CEO of his own NIL company. But he hasn’t led the Nittany Lions to the East Division crown or played in the College Football Playoff — yet.

Morgan, slightly younger at age 23, has two nine-win seasons on his resume and took the Golden Gophers to three of the school’s 22 bowl bids. Morgan and three other super seniors — the self-described Encore Four — are chasing their first West Division crown and coach P.J. Fleck believes Morgan’s experience can help his team finally pull it off.

“Tanner Morgan has been around the league, it seems like forever,” Fleck said. “He’s got his bachelor’s degree, his master’s degree, and now he’s kind of a non-major student, just taking classes and going to lead our football team. He got married here a few weeks ago.”

Morgan’s not alone in the marriage department — at Minnesota or around the league.

In a sport that has changed dramatically since Clifford and Morgan first arrived on campus as redshirt freshmen in 2017, the league’s quarterback carrousel appears remarkably stable.

Most eyes will be trained on Ohio State’s incumbent, C.J. Stroud, a Heisman Trophy finalist who threw for 4,435 yards and 44 touchdown passes and could end the league’s Heisman drought in 2022.

What Stroud remembers, though, is the 11-2 record and the inability to win a fifth straight league title. It prompted Stroud to tell reporters he didn’t accomplish anything last season, a remark his coach disputed.

Even the quarterback competitions look familiar.

At Michigan, Cade McNamara and J.J. McCarthy again are vying for the starting job. The same is true with Spencer Petras and Alex Padilla at Iowa and Noah Vedral and Gavin Wimsatt at Rutgers. Heck, even Art Sitkowski, the former Rutgers starter, could win re-emerge as Illinois’ starter.

While the debate rages among their coaches, one thing is clear in the Big Ten — experience matters, especially in the West Division where all four teams with nine or more wins have incumbent quarterback starters.

“His numbers the last half of the year were at a really elite level and he won a lot of big games,” Purdue coach Jeff Brohm said of O’Connell, the former walk-on. “He had to earn it the hard way. He was not entitled to anything, he came in knowing he had to start from the bottom and he had to work his tail off and prove beyond a reasonable doubt he could be the guy.”

O’Connell did that and more, earning second-team all-league honors in 2021.

And if he can’t get the Boilermakers to their first conference championship game, perhaps the two other, friendlier old-guy quarterbacks can write an ending for the ages, not far from where their storybook began.

“Playing in front of 110,000 (fans), I’m not going to downplay that, but when you’re in seventh grade those are the best days of playing ball because realistically you don’t have a care in the world,” Clifford said. “You’re just out there you’re getting orange slices at halftime, it’s the coolest thing. That’s what football is all about — having fun and being with your buddies and playing the game you love.”