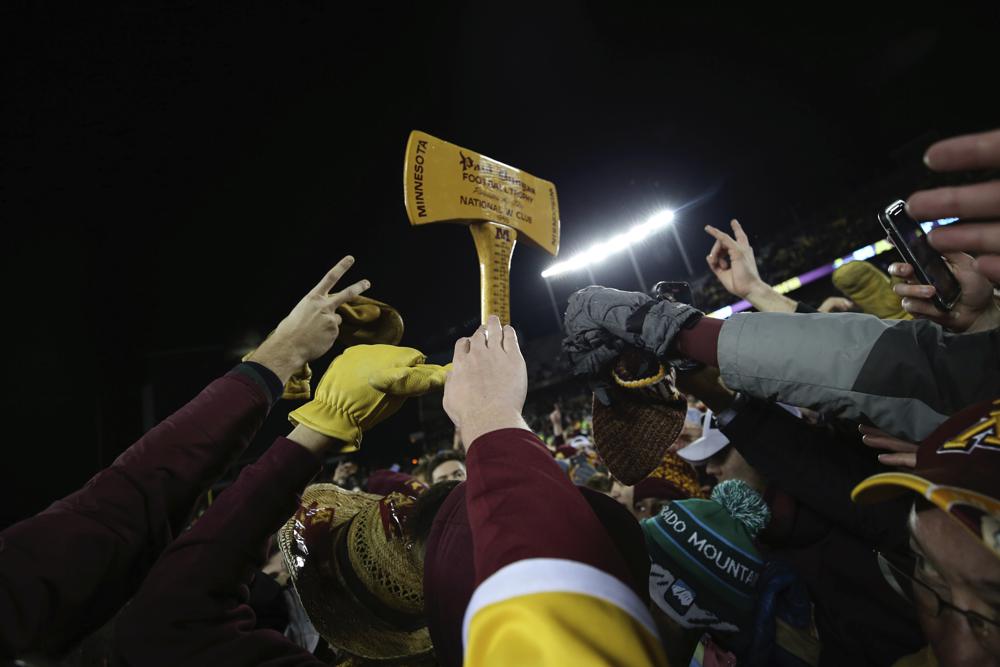 RECAP: Minnesota chops down No. 18 Wisconsin 23-13 to take back Axe

RECAP: Minnesota chops down No. 18 Wisconsin 23-13 to take back Axe

MINNEAPOLIS (AP) — Minnesota’s fans gleefully converged on the field as Paul Bunyan’s Axe was slowly paraded through the crowd, eager for a peek at this long-sought trophy that has gone so often to Wisconsin.

The Gophers’ defense swarmed the field like that all afternoon.

Tanner Morgan overcame an interception that was returned for a first-half touchdown, leading three scoring drives after halftime to take down the 18th-ranked Badgers in a 23-13 victory that regained the Axe and gave Iowa the Big Ten West Division title Saturday.

“We all put a ton into it. I’m just so proud that they have a big reward for it,” Minnesota coach P.J. Fleck said.

The Badgers had only 160 total yards over the final three quarters and three points after halftime. They turned the ball over on downs on their last two possessions, and the Gophers got to sprint to the end zone to hoist the 73-year-old trophy on their home field for the first time since 2003. The rap song “Jump Around” played over the speakers in a taunt of Wisconsin’s home-game anthem.

“Nobody wants to be the team that loses the Axe, so it’s truly disappointing,” Badgers outside linebacker Noah Burks said.

Collin Larsh made two field goals for Wisconsin, but he had a 48-yard try — four yards beyond his career long — bounce off the crossbar early in the fourth quarter. Minnesota went the other way for Matthew Trickett’s third field goal of the game to put the stamp on it.

Morgan went 11 for 16 for 199 yards and a third-quarter touchdown pass to Chris Autman-Bell, but the defense stole the show. The Gophers (8-4, 6-3) delivered the kind of stifling performance by their defense the Badgers (8-4, 6-3, No. 14 CFP) were so used to demoralizing their opponents with.

Freshman standout Braelon Allen was limited to 47 yards on 17 rushes. He topped the 100-yard mark in each of the last seven games, all wins for Wisconsin. The Badgers had 62 rushing yards, after averaging 269 yards on the ground during their winning streak.

“We hit them low. We swarmed. There wasn’t many broken tackles, and if guys got a hand on them, they held on for dear life and everybody rallied around him,” Fleck said.

Over the last 23:05 of game time, Allen had just two carries for minus-2 yards. Defensive coordinator Joe Rossi sent a flurry of early down blitzes that caught the Badgers off guard.

Wisconsin went 4 for 14 on third down conversions — and 1 for 8 on third-and-4-plus-yards.

“The biggest thing was just not getting in a rhythm. They’re a good defense, but we’ve all got to execute together and truly move the ball one first down at a time,” quarterback Graham Mertz said.

Scott Nelson returned a tipped-ball interception 25 yards for a touchdown for the Badgers early in the second quarter to give them a 10-3 lead.

“My teammates had my back the whole time,” said Morgan, who moved into second place on the program’s all-time list with 56 career touchdown passes.

Justin Walley, who had two pass interference penalties while covering Kendric Pryor, wrestled away a catch by Pryor for his first career interception at the Wisconsin 28 early in the third quarter.

Morgan hit tight end Brevyn Spann-Ford for 26 yards to the 2 on the next play. Then Ky Thomas ran it in for a 13-10 lead with eight offensive linemen blocking on the play. The Gophers had five scoring drives of 50-plus yards.

Even by settling for a field goal, the Gophers served notice on their first possession they weren’t going to go quietly. Wisconsin also lost safety Collin Wilder, who had two interceptions against Nebraska last week, after the first snap because of an automatic-ejection targeting foul for leading with his helmet on Autman-Bell.

“We didn’t play to our potential and what we could have done. I think we left a lot of meat on the bone as the term goes,” Badgers linebacker Leo Chenal said.

Wisconsin: Mertz went 21 for 38 for 171 yards and an interception. The sophomore smoothed out his season with some stellar performances down the stretch after his turnovers were a major factor in the 1-3 start. On this rare day when the rushing attack was nearly nonexistent, Mertz showed he’s got a long way to go.

Minnesota: For all that the Gophers have done well in five seasons under Fleck, they’ve lacked these fire-up-the-fan-base wins over border-state rivals Iowa and Wisconsin. This was the second time in four years they’ve beaten the Badgers, following 14 straight losses. Had Iowa lost Friday to Nebraska, the Gophers would’ve won the West for the first time.

“There wasn’t one person last night sad about what happened with Iowa and Nebraska. Would we have liked it to be different? Sure. But we had plenty of time to control that,” Fleck said.

Wisconsin: The Badgers will get their bowl game invitation Dec. 5. The Las Vegas or Music City bowls (both Dec. 30) are strong possibilities, with a Jan. 1 game not out of the question.

Minnesota: The Gophers are essentially in the mix for the same as the same postseason games as the Badgers. They’ve won four straight bowls.