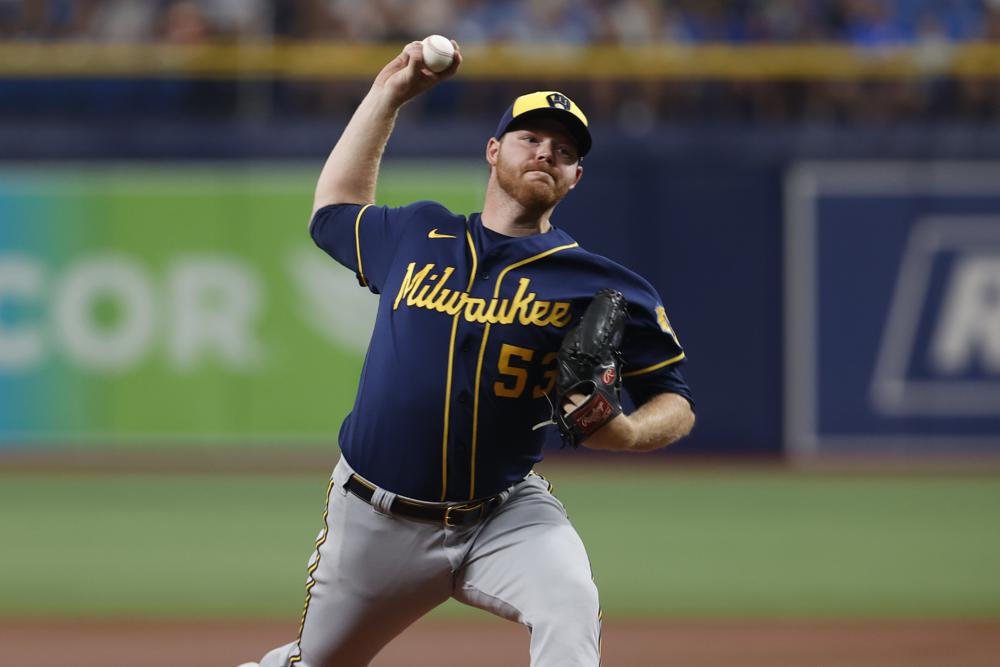 ST. PETERSBURG, Fla. (AP) — Brandon Woodruff struck out 10 over five innings in his return from the injured list, Andrew McCutchen and Luis Urías homered during a four-run sixth, and the Milwaukee Brewers beat the Tampa Bay Rays 5-3 on Tuesday night.

Woodruff, who hurt his right ankle on May 27 at St. Louis, allowed one run and two hits. While on the 15-day injured list, Raynaud’s syndrome affected his pitching fingers.

“He pitched wonderfully,” Milwaukee manager Craig Counsell said. “The fastball was very, very good. Overpowering for most of the game. It was fun to watch, it really was.”

The right-hander’s average four-seam fastball was 97.7 mph, which tied with a start on July 21, 2019 at Arizona for his fastest in any outing.

Woodruff had no issues with his fingers.

“That’s a good, positive sign,” Woodruff said. “I’ll just keep monitoring it, But as far as today, if it goes like it does today for the rest of the year I’ll be happy with that.”

Woodruff (6-3) was perfect through three innings with seven strikeouts. He made his major league debut on Aug. 4, 2017 at Tropicana Field against the Rays and went 6 1/3 innings in a 2-0 win.

Matt Wisler (2-2) replaced Tampa Bay starter Shane Baz with one on and two outs in the sixth, and it took eight pitches for the Brewers to turn a one-run deficit into to a 4-1 lead. McCutchen connected on Wisler’s second offering for a two-run shot, and after Kolten Wong doubled, Urías hit another two-run drive.

“Wis has been so good for us,” Tampa Bay manager Kevin Cash said. “It kind of came together really fast. They handled the breaking ball, got it up in the air and hit a couple big home runs.”

Wisler was coming off a stretch of 11 scoreless outings in 12 games.

Urías added an RBI double in the eighth.

Josh Hader struck out the side in the ninth for his 23rd save in 24 chances.

Baz gave up one run, three hits and two walks along with six strikeouts in 5 1/3 innings.

Jason Alexander entered in the eighth and walked his first two batters: Brett Phillips, who’s in a 4-for-51 slide, and Yandy Díaz. After a passed ball, Wander Franco had a sacrifice fly and Harold Ramírez hit a run-scoring grounder to get the Rays within 5-3.

Devin Williams replaced Alexander, who was hit in the leg by Randy Arozarena’s two-out base hit. After walking Isaac Paredes, Williams got a fielder’s choice from Josh Lowe.

Alexander was OK after the game.

Díaz doubled on a nine-pitch at-bat leading off the fourth and scored to make it 1-0 on Arozarena’s two-out single.

Tampa Bay extended its team-record stretch to 13 consecutive games decided by two or fewer runs. It’s the longest stretch in the major’s since the New York Yankees had 16 in a row from July 20-Aug, 5, 2014.

Woodruff came off the mound on the third-base side to field Arozarena’s hopper in the second and first baseman Rowdy Tellez scooped the pitcher’s throw from the dirt to complete the out.

There was a video tribute after the second inning for Brewers infielders Willy Adames and Mike Brosseau, who returned to Tropicana Field. The pair were on the Rays’ 2020 AL pennant-winning team.

Adames received a nice ovation before his first-inning at-bat and tipped his batting helmet toward the stands.

Milwaukee lefty Eric Lauer (6-3) starts the finale of the two-game series on Wednesday. He has allowed eight homers over his last three starts. The Rays will have a bullpen day with left-hander Jalen Beeks (1-1) as the opener.

0
0   0
previous Woodruff back Tuesday for Brewers — probably with pants that fit
next AP sources: NFL insists on indefinite suspension for Watson
Related Posts