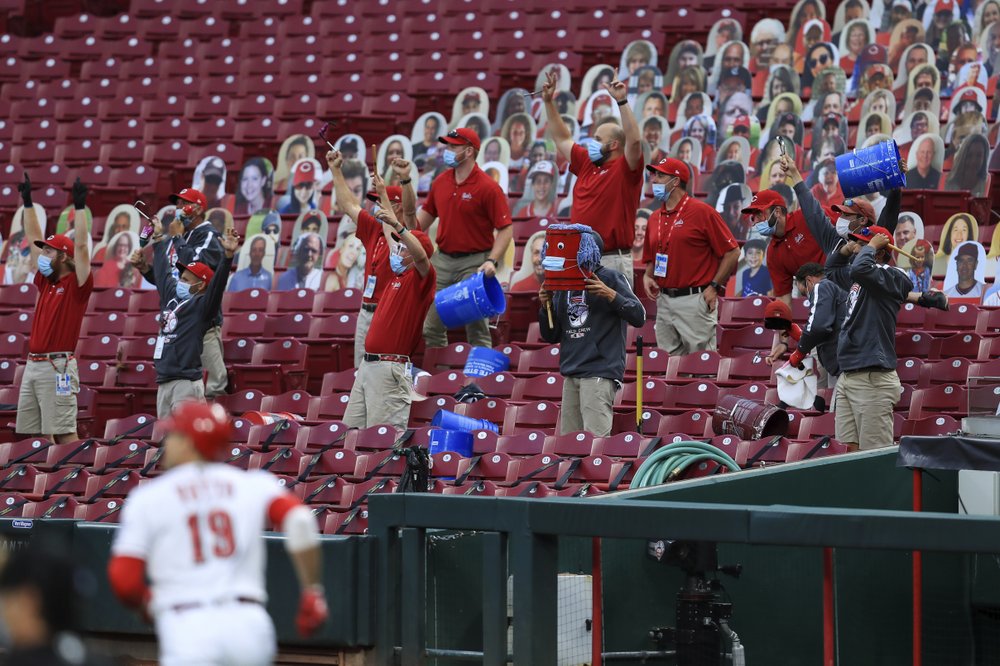 CINCINNATI (AP) — The grounds crew that had been banging drums and raising a din in the stands all game long lined up and exchanged high-fives with exuberant Reds players.

Felt like old times at Great American Ball Park — 2013, to be exact, the last time Cincinnati made the playoffs.

Now, the Reds are on the verge of going back.

Joey Votto homered for his first hit all season against Milwaukee, Trevor Bauer dominated on short rest and the Reds won a pivotal series for playoff contention, beating the Brewers 6-1 on Wednesday night.

“A team we’re neck-and-neck with in the division, in the wild-card hunt — today was an important game, and we came through for sure,” Votto said.

The Reds are in position for a wild-card playoff berth after taking two of three from their NL Central rival. Cincinnati has won nine of 11, its best streak of the season, to get a shot at its first playoff appearance since a wild-card berth in 2013 under manager Dusty Baker.

After a day off Thursday, Cincinnati finishes with three games in Minnesota and a chance to clinch a spot.

“I don’t want to get too far ahead of myself because I’ve seen it too many times where teams get their hearts broken,” said Votto, who was on the last playoff team. “I’m of course enjoying playing winning baseball, but we’ve got three more to go.”

Reflecting the urgency of winning the final game of the series, Cincinnati had Bauer (5-4) pitch on three days’ rest. He allowed four hits and struck out 12 in eight innings, throwing 104 pitches.

“Just a big game,” manager David Bell said. “I think it was even more meaningful that it was on short rest. He knew how big of a game this was and he wanted to be out there.”

Bauer exited with an NL-best 1.73 ERA. Cleveland’s Shane Bieber tops the majors at 1.63 after a strong performance Wednesday night.

For Milwaukee, it was a disappointing start to a challenging final week on the road. The Brewers fell a game behind the Reds and now head to St. Louis, where they’ll play five games in four days with a doubleheader on Friday.

The Reds’ homer-reliant offense made the difference. They scored all of their 14 runs in the series off homers — seven in all.

Votto was 0 for 22 against Milwaukee this season when he connected in the first inning off Adrian Houser (1-6) for a 2-0 lead. Jesse Winker added a solo homer off Houser, who is 0-6 with a 6.70 ERA in his last nine starts.

The Reds pulled away with the help of an error in the fifth. Nick Castellanos reached on second baseman Keston Hiura’s off-target throw. Alex Claudio relieved and walked Votto, and Eugenio Suárez hit his 15th homer for a 6-1 lead.

QUOTE OF THE DAY

Votto, when asked if he watches the scores of other games to try to figure out playoff seedings: “I tried. It’s too confusing. It’s much too confusing, but it’s the best kind of confusing.”

Brewers: Ryan Braun got a day off as he continues to deal with a sore back. He was the DH and played right field in the first two games of the series, going 0 for 7 with three strikeouts.

Reds: LH Wade Miley was activated off the 10-day injured list. He’d been out since Aug. 28 with a strained pitching shoulder. Miley pitched the eighth and gave up one hit. The Reds plan to use him out of the bullpen the rest of the way.

Reds: Tyler Mahle (2-2) is expected to pitch the opener in Minnesota.

TOP PHOTO: Members of the Cincinnati Reds’ grounds crew react as Reds’ Joey Votto runs the bases after hitting a two-run home run during the first inning of the team’s baseball game against the Milwaukee Brewers in Cincinnati, Wednesday, Sept. 23, 2020. (AP Photo/Aaron Doster)

0
0   0
previous Dietzen returns to Badgers; Pearson out for medical reasons
next For softball players, season of ‘shield life’ nears an end
Related Posts