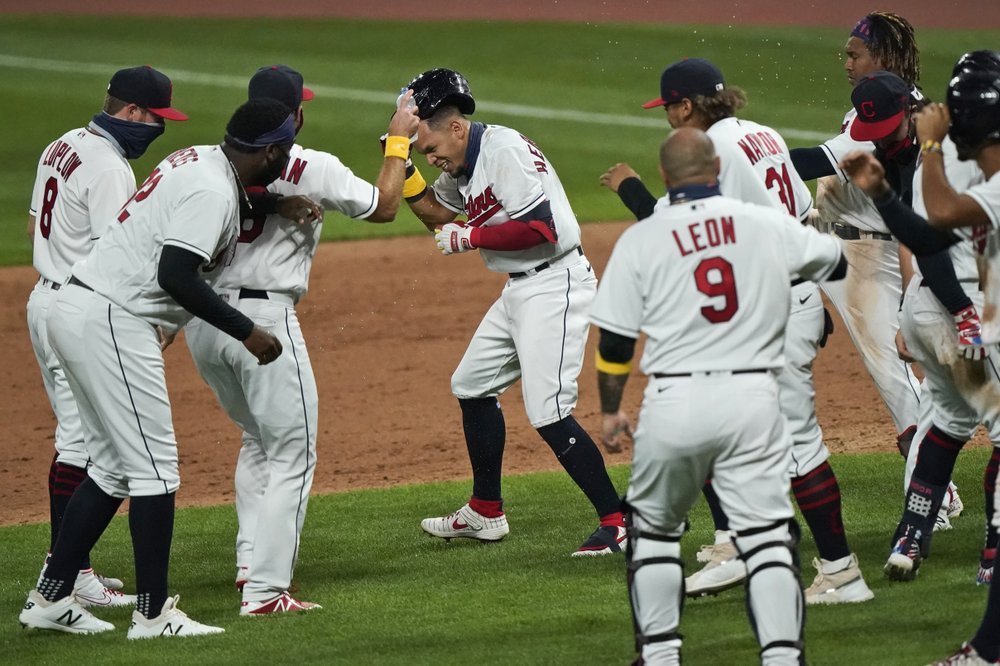 Milwaukee closer Josh Hader allowed his first hit of the season, and then gave up César Hernández’s game-winning single in the ninth inning as the Cleveland Indians beat the Brewers 4-3 on Saturday night.

Oscar Mercado, who scored on Hernández’s liner through a five-man infield, led off the ninth with a double, ending Hader’s major league-record streak of 12 hitless appearances to start the season.

“It was a great run,” Brewers manager Craig Counsell said. “We’re 38 games into the season and he hasn’t given up a hit. You’ve got to give Mercado credit. He was hitting ninth and was a big part of their offense.”

Hader (0-1) did not retire a batter, leaving him tied with Hal Newhouser and Brad Clontz for the record of 35 consecutive hitless at-bats to open a year. The left-hander also threw a wild pitch that moved Mercado to third.

“I wasn’t sure the streak was still going until I looked up at the scoreboard and said, ‘I guess he’s finally given up a hit,’” said Mercado, who is batting .146 and had been 0 for 9 against lefties.

Cleveland reliever Brad Hand (1-1) gave up a leadoff double to pinch hitter Tyrone Taylor and a single to Christian Yelich in the ninth, but struck out Ryan Braun to end the inning.

“Josh is a great pitcher and that’s an amazing streak,” Hand said. “Merky got a good pitch to hit and César came through, so we were able to scratch a run across.”

Keston Hiura hit a solo homer in the sixth and Orlando Arcia belted a leadoff drive in the eighth as Milwaukee erased a 3-1 deficit. Arcia’s shot came against Nick Wittgren, who had worked out of a bases-loaded jam in the seventh.

José Ramirez’s two-run homer gave the Indians a 3-1 lead in the fifth. It came on the 10th pitch of the at-bat and chased Brewers starter Brandon Woodruff. Hernández doubled in Mercado one batter earlier to tie the score.

Aaron Civale allowed two runs in six innings for Cleveland, but remained winless since Aug. 19 at Pittsburgh. The right-hander gave up an RBI double to Daniel Vogelbach in the fourth and Hiura’s homer.

Vogelbach, who was claimed off waivers from Toronto on Thursday, went 1 for 3. The former All-Star has three hits in two games with the Brewers after going 5 for 57 (.088) in 20 combined games for the Mariners and Blue Jays.

Woodruff worked 4 1/3 innings, allowing four hits and striking out seven. The right-hander pitched for the first time since becoming a father on Aug. 31, when his wife Jonie gave birth to daughter Kyler Alise.

“I’m still doing OK, but not getting through five innings is kind of a disgrace,” Woodruff said. “I hold myself to a pretty high standard.”

Yelich extended his on-base streak to 25 games, the longest active run in the majors. Hiura scored twice and was hit by pitches from Civale and Cal Quantrill.

Cleveland played its 25th game without manager Terry Francona, who has battled gastrointestinal issues all season and recently underwent surgery.

“Everyone picked up everyone else tonight,” Civale said. “It was a real team win.”

Brewers right-hander Corey Knebel (left hamstring strain) joined the team in Cleveland, but remains on the 10-day injured list. Counsell said the setup man is ready to be activated after beginning a rehabilitation assignment on Aug. 28. “We’re a little concerned with some of our position guys’ (health), so we’re just trying to get through today first,” Counsell said. Knebel owns a 9.45 ERA in eight appearances.

Brewers: OF Avisaíl García (hamstring strain) sat out his second straight game. He was hurt Wednesday at Detroit, one day after returning from an ankle injury. Garcia has been limited to eight at-bats in Milwaukee’s last eight games.

Indians: OF Delino DeShields (right shoulder bruise), who was injured Friday, was not in the lineup. Mercado filled in for him in center. Interim manager Sandy Alomar Jr. said DeShields is “able to hit, but not throw without pain.”

Brewers: LHP Brett Anderson (2-2, 4.18 ERA), who is 4-0 with a 0.94 ERA in six career starts at Progressive Field, takes the mound in the three-game series finale. Opponents are batting .300 against Anderson.

Indians: RHP Shane Bieber (6-0, 1.20 ERA) faces Milwaukee for the first time in his three-year MLB career. The 2019 All-Star Game MVP leads the American League with 84 strikeouts and is tied for first in wins.

TOP PHOTO: Cleveland Indians’ Cesar Hernandez, center, is mobbed by teammates after hitting an RBI-single in the ninth inning in a baseball game against the Milwaukee Brewers, Saturday, Sept. 5, 2020, in Cleveland. (AP Photo/Tony Dejak)

0
0   0
previous Heat have Bucks in serious trouble going into Game 3
next Out of the box: Umps eject Nats GM Rizzo from luxury suite
Related Posts