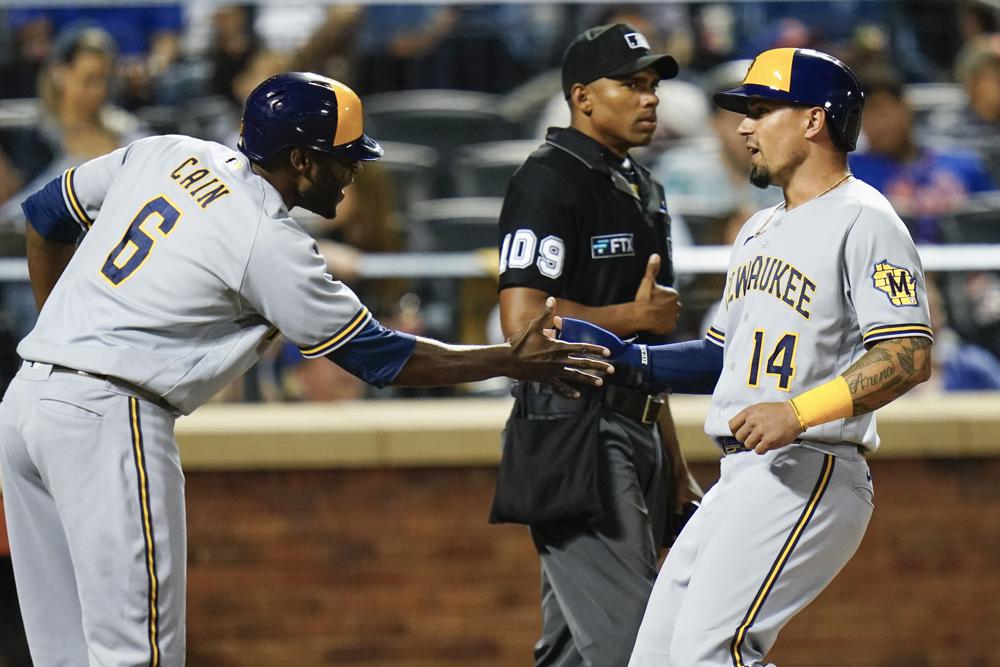 NEW YORK (AP) — Corbin Burnes bounced back from his two shortest outings of the season to pitch six innings of two-run ball, Willy Adames got two of his three hits in a seven-run fifth and the Milwaukee Brewers routed the New York Mets 10-2 on Wednesday night for their second win in 11 games.

Milwaukee’s big night gave manager Craig Counsell his 564th victory with the Brewers, breaking the franchise record. Counsell, the longest-tenured manager in the National League, passed Phil Garner, who managed 1,180 games for the team from 1992-99.

Burnes (4-4) entered with a 6.75 ERA over his previous two outings and had allowed eight runs in eight innings in losses to San Diego and Philadelphia. But the reigning NL Cy Young Award winner was in control throughout. He yielded five hits, including Jeff McNeil’s homer in the fourth and RBI single in the sixth, while striking out eight and walking none.

Burnes fanned Francisco Lindor twice and retired NL RBI leader Pete Alonso all three times, getting the slugger on a pair of foul popups before striking him out in the sixth.

Milwaukee scored twice in the first, its first opening inning with multiple runs since May 26 at St. Louis. Then the Brewers poured it on in the fifth against David Peterson (3-1) and relievers Jake Reed and Trevor Williams.

Adames doubled in the first and scored on a two-run single by Luis Urías. Adames later started Milwaukee’s biggest inning of the season with a single and scored on a bases-loaded walk to Victor Caratini after advancing to second on an errant pickoff toss by Reed.

The slumping Adames also hit a two-run single to give the Brewers a 9-1 lead. In between his two hits in the fifth, Lorenzo Cain hit a run-scoring infield single and pinch-hitter Jace Peterson had a two-run double. Andrew McCutchen capped the big inning with an RBI single.

Adames had his second three-hit game of the season. He entered 3 for 24 since returning last week from a sprained left ankle.

Brewers: LHP Josh Hader was placed on the paternity list and is expected to miss the next three days. … RHP Brandon Woodruff, experiencing numbness in his three middle fingers due to Raynaud’s syndrome, said he felt good after throwing only fastballs during a bullpen session Tuesday. Counsell said Woodruff is expected to begin a rehab assignment Saturday. … RHP Freddy Peralta (right lat strain) has begun throwing. … RHP Trevor Gott (strained right groin) is playing catch and inching closer to throwing off a mound.

Mets: C James McCann (left hamate fracture) will begin a rehab assignment Thursday at Double-A Binghamton. Tuesday marked four weeks since his surgery and McCann said he stopped feeling any pain while taking swings late last week. … RF Starling Marte exited with a bruised right forearm after getting hit by a pitch in the sixth. X-rays were negative and he is day-to-day. … RHP Yoan López was recalled from Triple-A Syracuse and OF Khalil Lee was optioned there.

TOP PHOTO: FILE – Milwaukee Brewers’ Lorenzo Cain (6) celebrates with Jace Peterson (14) after they scored on a single by Willy Adames during the fifth inning of a baseball game against the New York Mets, Wednesday, June 15, 2022, in New York. (AP Photo/Frank Franklin II)