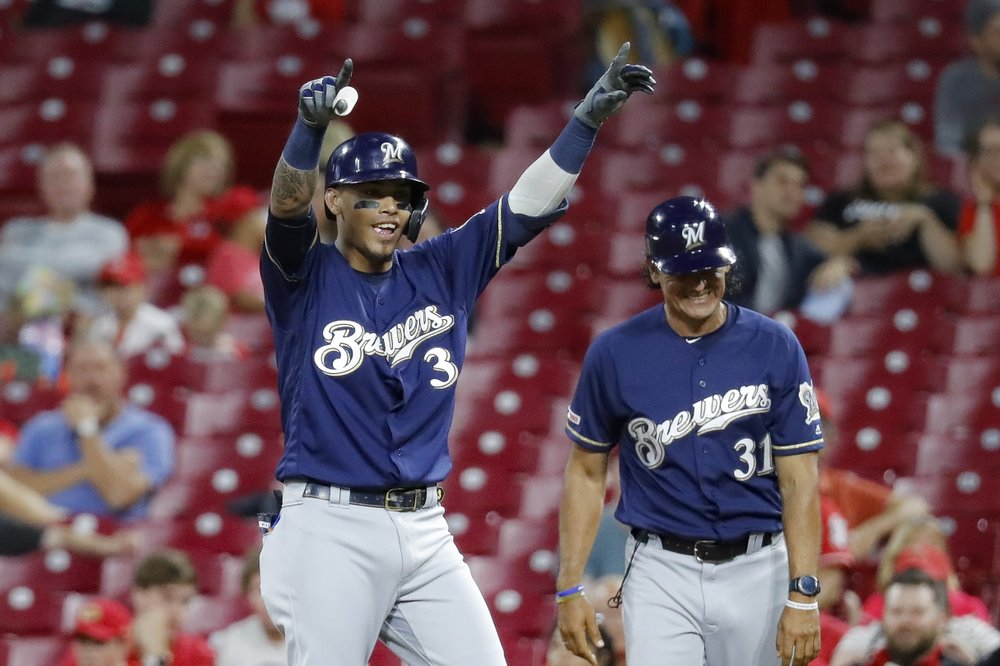 LEADING OFF: Brewers, Twins on brink of some bubbly

LEADING OFF: Brewers, Twins on brink of some bubbly

A look at what’s happening around the majors Wednesday:

The Brewers are on the verge of another postseason berth. Milwaukee can lock up an NL wild card with a win over Cincinnati or losses by the Cubs and Mets. Just like last season, when the Brewers put on a late rush to take the NL Central title, the Brewers have closed in on a playoff spot with a September flourish. They’ve won 16 of 18, positioning themselves for a wild-card showdown with Washington. Jordan Lyles starts for Milwaukee against the Reds. He’s 6-1 with a 2.35 in 10 starts since being acquired from Pittsburgh.

The Twins can clinch their first AL Central title since 2010 with a win over Detroit and a loss by Cleveland against the Chicago White Sox. Minnesota is 97-60, its most victories since going 98-64 in 1970. With three wins in their final five games, the Twins can become the record fourth team in the majors this year with 100 victories. Two years after going undrafted, rookie right-hander Randy Dobnak (1-1, 2.01) is set for his fifth big league start for Minnesota. He’s trying to assure himself a spot on the postseason roster.

The only real race left is for the two AL wild cards, with Tampa Bay and Cleveland trailing Oakland in a tight battle for the top spot. The Rays hold a half-game edge over the Indians for the final position and will start right-hander Charlie Morton (15-6, 3.15) against the Yankees a day after beating the AL East champions on a walk-off homer by Ji-Man Choi. Tampa Bay has trailed in 14 of its last 15 games, yet is 10-5 in that stretch. Cleveland is sending right-hander Shane Bieber (15-7, 3.23) out against the White Sox. Oakland is likely to use an opener against the Angels.

Bidding for a second straight NL Cy Young Award, Mets ace Jacob deGrom (10-8, 2.51 ERA) makes his final scheduled start this season against last-place Miami. The right-hander entered Tuesday leading the league in strikeouts with 248 and WHIP at 0.99. He ranked second in ERA and fourth in innings (197). And he’s been finishing strong in September, with consecutive outings of seven scoreless innings the last two times out. He has pitched seven innings in seven straight starts and 11 of his past 12.

New York would be eliminated from the postseason with a loss or a win by Milwaukee.

Rick Porcello (13-12, 5.56 ERA) makes his 159th and possibly last regular season start for the Red Sox at Texas. The 30-year-old right-hander is eligible for free agency this offseason after five seasons with Boston, including 2016 when he was the AL Cy Young Award winner with a 22-4 record. He is 148-118 overall in 11 major league seasons, going 76-63 in six years with Detroit before getting traded to Boston. Even after throwing six scoreless innings in a no-decision at Tampa Bay last Friday, Porcello is 1-2 with a 6.63 ERA in four September starts.