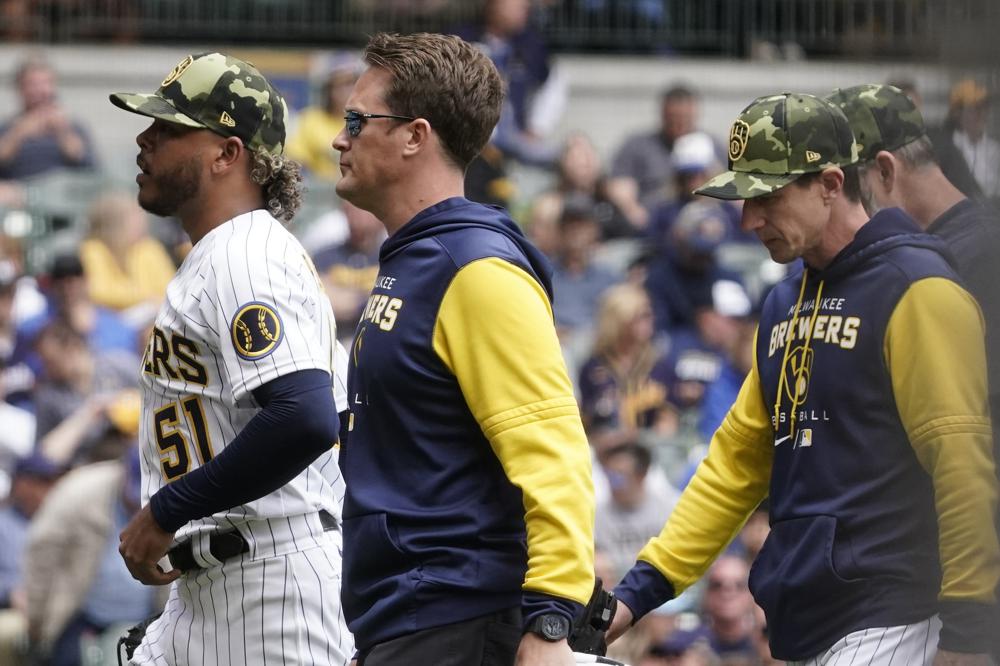 MILWAUKEE (AP) — The slumping Washington Nationals hitters are heading home with a confidence boost while the NL Central-leading Milwaukee Brewers begin their longest trip of the season without one of their All-Star pitchers available.

Lane Thomas hit two RBI doubles and the Nationals broke out of their doldrums Sunday in an 8-2 victory over the Milwaukee Brewers, who lost Freddy Peralta to shoulder tightness in the fourth inning.

Brewers manager Craig Counsell said Peralta will undergo an MRI on Monday and will be heading to the injured list.

“Hopefully, it’s nothing that big or crazy, but it’s part of the game,” Peralta said. “We’ll see what happens.”

Peralta (3-2) left after allowing a run-scoring double to Thomas during the Nationals’ six-run outburst in the fourth inning.

“I thought in the second inning, he didn’t have the same life on his fastball,” Brewers catcher Omar Narváez said. “In the third inning, I went out to see how he felt. … I asked him how he was feeling and he said he was a little tight. I told him there’s no point this early in the season trying to be the hero.”

Washington’s six runs in the fourth marked its most productive inning of the season and matched the biggest run total the Brewers had allowed in a single inning this year.

The Nationals entered the day having dropped seven of their past nine, and they had scored a total of six runs in the seven losses. But they had an early 8-0 lead Sunday and cruised to the win in their final game before starting a seven-game homestand.

“Maybe that’ll spark something and we can get some wins over the next few weeks here and get back in it,” Thomas said.

Milwaukee didn’t retire anyone in the fourth until Nelson Cruz – the eighth batter of the inning – got thrown out trying to stretch a bloop single down the right-field line into a double. The Nationals first eight batters of the inning all got hits, tying a Washington franchise record for consecutive plate appearances with a hit.

The Nationals led 3-0 and had runners on second and third when Peralta’s injury forced his departure. Peralta, a 2021 All-Star, entered the day having allowed just one run over 12 2/3 innings in his previous two starts.

“I think when guys are on a roll, they’re throwing strikes,” Thomas said. “I think we were just aggressive on pitches in the middle of the plate. That was my game plan. Pretty good fastball. It plays up a little bit. I was just going to be aggressive on the fastball and drive some runs in.”

Dee Strange-Gordon and César Hernández greeted reliever Brent Suter with consecutive RBI bunt singles on squeeze plays to make it 5-0. That was the first time the Nationals have produced bunt RBIs in consecutive at-bats, according to Elias Sports Bureau.

Keibert Ruiz followed with an RBI double before Juan Soto hit a two-run single through a drawn-in infield.

Nationals manager Dave Martinez had altered his lineup Sunday by moving Soto from second to third and moving Ruiz into the No. 2 spot. Ruiz had gone 8 of 16 in his past five games going into Sunday, while Soto was 2 of 20 over his past six games.

“I wanted to try something different,” Martinez said. “Today, they both drove in some runs. Hopefully they continue to do that.”

The Nationals took a 1-0 lead in the second inning when Maikel Franco reached on a two-out infield hit and came home on Thomas’ double to right. They extended the lead to 2-0 in the third as Cruz hit a two-out single to drive in Hernández.

Milwaukee got a solo homer from Tyrone Taylor and an RBI single by Andrew McCutchen in the fifth.

Nationals starter Aaron Sanchez (3-3) struck out one and gave up seven hits, two runs and two walks in five innings.

Ross will pitch for Double-A Harrisburg and Strasburg will join Class A Fredericksburg. Martinez said they’re planning for each of the right-handers to work four innings and throw 60-plus pitches.

Strasburg is recovering from thoracic outlet syndrome surgery and has pitched a total of 26 2/3 innings since the start of the 2020 season. Ross hasn’t pitched in a major league game since Aug. 10 because of a partially torn elbow ligament.

The Nationals pinch-hit for Cruz in the seventh inning. Martinez said Cruz sprained his ankle sliding into second in the fourth.

“He’s going to be day to day,” Martinez said. “He was pretty sore.”

Nationals: Open a three-game series with the Los Angeles Dodgers on Monday. Scheduled starters are RHP Joan Adon (1-7, 6-38 ERA) for the Nationals and LHP Tyler Anderson (4-0, 4.04) for the Dodgers.

TOP PHOTO: Milwaukee Brewers starting pitcher Freddy Peralta leaves the game with a trainer during the fourth inning of a baseball game against the Washington Nationals Sunday, May 22, 2022, in Milwaukee. (AP Photo/Morry Gash)