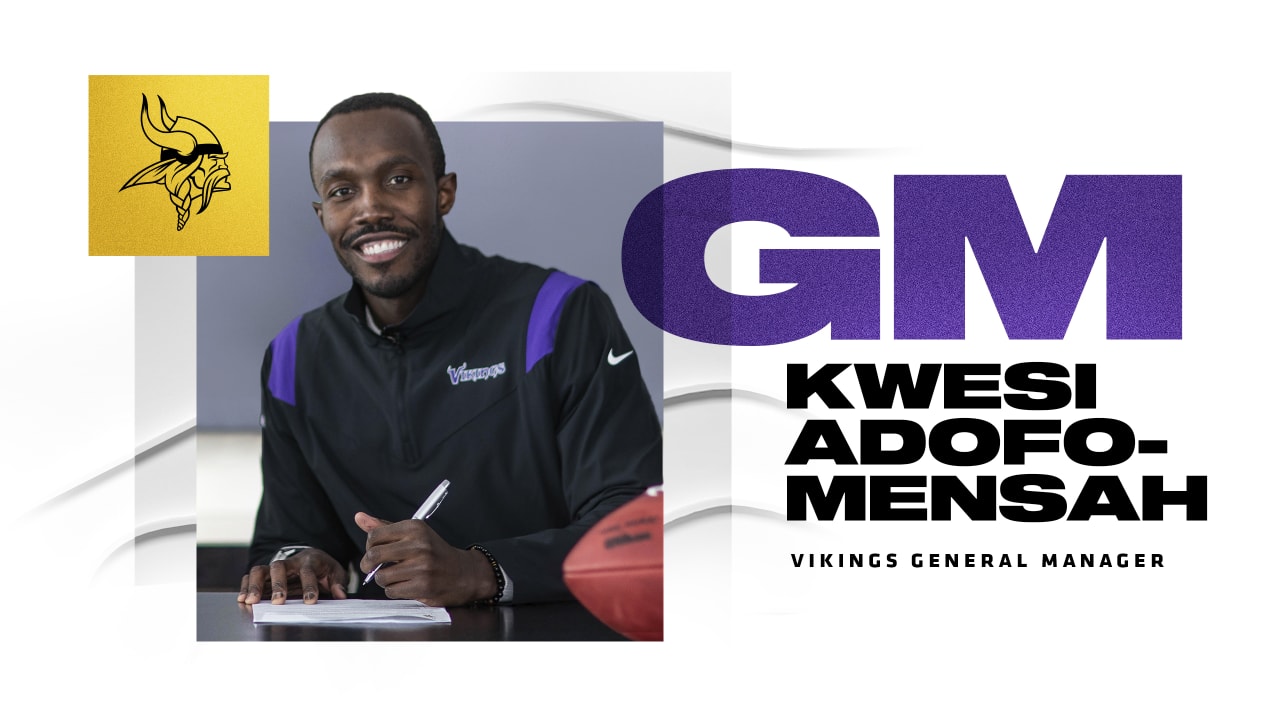 EAGAN, Minn. (AP) — Kwesi Adofo-Mensah spent his first eight years out of Princeton on Wall Street, working as a commodities trader and a portfolio manager.

Crossing the country to continue his studies and become an economics professor at Stanford was only the start of a sharp turn on the career path that led him to the NFL.

“I was going to wear a tweed jacket and glasses and teach students,” Adofo-Mensah said, “and I still had a lot of decision-making left in me. I wanted to be a part of it in a practical sense.”

Now he’s the general manager of the Minnesota Vikings, a decidedly unconventional decision by a consistently competitive franchise that has played 61 seasons without winning a championship.

“I know my background is unique, but when you think about this job, the job is about making decisions, building consensus in the building, combining different sources of information into one answer and having everybody behind it,” Adofo-Mensah said at his introductory news conference at Vikings headquarters on Thursday. “Along those lines, I don’t think there’s many people more qualified than I am.”

The emotional stability that served him well in the volatility that exists in the financial industry, Adofo-Mensah said, comes in handy in the high-intensity, high-stakes world of pro football. The ability to pick the right stocks at the right price is also not all that unlike building an NFL roster through free agency and the draft under a salary cap system.

“It’s just a different canvas with the same art, I’d say,” he said.

Though he comes without on-field experience, the 40-year-old Adofo-Mensah has nine seasons in the league on his resume. He started with the San Francisco 49ers in 2013 in the research and development department, after deciding the PhD program at Stanford was not his calling. His foot in the door was made possible through a connection made at a sports analytics conference with Brian Hampton, now the vice president of football administration with the 49ers.

As he directed the club’s efforts to use advanced quantitative methods for game strategy and personnel evaluation, the 49ers promoted him twice. Then he left in 2020 for Cleveland to become vice president of football operations, the top assistant to general manager Andrew Berry.

“In the NFL, I’ve learned from some great teachers. I went in not thinking I knew anything, and I think a lot of times an impediment to learning is trying to affirm what you already think or not being open hearted and open minded about learning,” said Adofo-Mensah, whose parents emigrated from Ghana and settled in New Jersey. His mother and his fiancee accompanied him on Thursday.

His profile elevated in part by the NFL’s effort to put more minorities in leadership positions around the league, Adofo-Mensah came with the full backing of his boss of two years, Berry, who lauded his people skills and natural curiosity.

When they debriefed after Adofo-Mensah’s initial video interview with the Vikings on Jan. 17, Berry observed that his deputy was “buzzing” after his first interaction with Vikings owners Zygi Wilf and Mark Wilf and the other key leaders from the organization involved in the search process.

“You push him off into the deep end, and he very quickly learned how to swim,” Berry said.

With the 49ers, Adofo-Mensah taught financial literacy to young players, a vital avenue for developing connections with the people whose football skills are the very reason the NFL exists. Those interactions will now be more important for him than ever, as the face of the front office and the final decision-maker on contract signings and draft picks that form the roster each year.

The most critical relationship, of course, will be with the head coach who has not yet been hired. Vikings leadership conducted initial interviews with eight candidates to keep from falling behind in the process with eight other teams also on the hunt this offseason. One of them, Green Bay offensive coordinator Nathaniel Hackett, has been taken off the market by the Denver Broncos.

Adofo-Mensah overlapped with 49ers defensive coordinator DeMeco Ryans during his time there, which could land him on the shorter list. The 49ers play Sunday in the NFC championship game against the Los Angeles Rams.

“I always say that a coach that I would work with, I would work for. It’s somebody that I would want to partner with,” Adofo-Mensah said, dismissing a question about whether he has full authority over the roster in his contract. “I wouldn’t care about that distinction because they understand about personnel and about living in today and living in tomorrow that would make us a great partnership.”