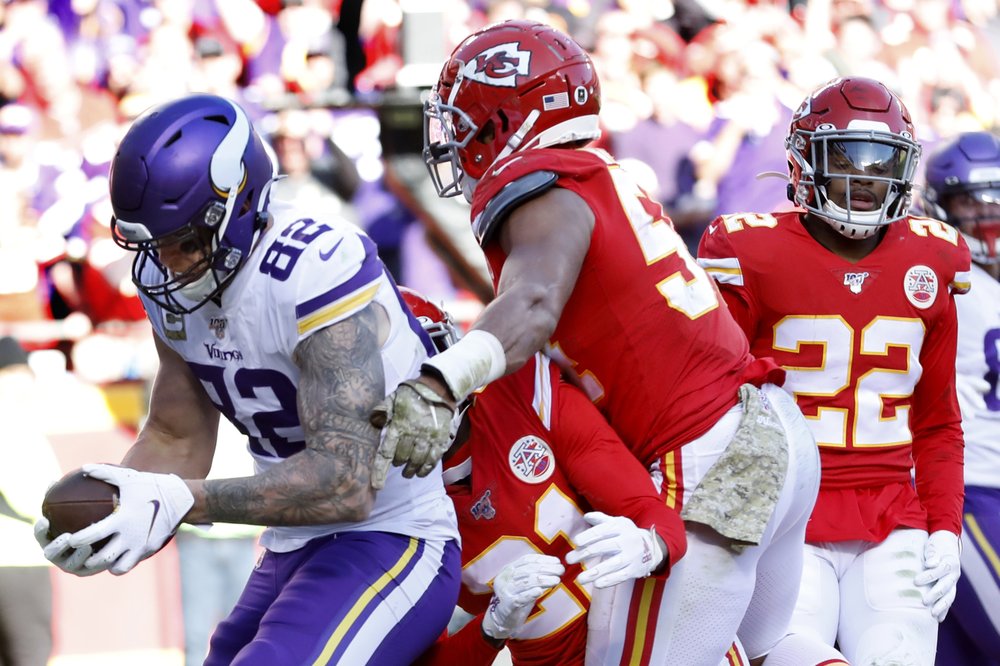 KANSAS CITY, Mo. (AP) — The Minnesota Vikings should have felt good about their chances against the Kansas City Chiefs on Sunday, especially when Kirk Cousins and their high-scoring offense got the ball back with a 23-20 lead midway through the fourth quarter.

Everything unraveled in spectacular fashion.

Cousins threw an incompletion, Dalvin Cook was bottled up twice and the Vikings were forced to punt. The Chiefs promptly marched the other way for a tying 54-yard field goal with 2:30 to go.

Still with a chance to drive for a winning field goal of their own, the Vikings instead went backward. Cousins threw another incompletion, then completed a pass to Irv Smith Jr. for a 7-yard loss, before another incompletion and another punt — this one shanked.

After another quick-strike drive by the Chiefs, Harrison Butker knocked through another field goal, and the Vikings were left to slump out of Arrowhead Stadium with a 26-23 loss.

“I don’t feel like the game is yours,” Cousins said, “but it’s certainly a great opportunity to make it yours and to go do something. That was certainly one of the disappointments to not do more on those final two drives.”

The final two drives by one of the NFL’s five best offenses? Six plays for minus-7 yards.

That came against a defense that, while rapidly improving, has been among the league’s worst most of the season. The Chiefs had been especially bad against the run, but they stuffed Cook most of the afternoon, forcing the Vikings to throw the ball more than coach Mike Zimmer wanted.

Kirk Cousins had been averaging 315 yards over the past four games, throwing eight touchdown passes and just one interception. He even set a franchise-record for completion percentage in a game last week, going 23 of 26 for 285 yards against the Washington Redskins.

He was 19 of 30 for 220 yards against the Chiefs. And while he threw three touchdown passes without a pick, he also was sacked once, hit four more times and was relentlessly under pressure.

“There’s some plays he’d like to get back,” Zimmer said. “I don’t think we helped him a lot.”

Cook had rolled into the game with an NFL-best 823 yards rushing, and he’d been a big part of the Vikings offense out of the backfield. But Cook was held to only 71 yards rushing — an average of 3.4 per carry — and his longest run was limited to just 12 yards.

“He’s a great running back, the best right now going,” Chiefs coach Andy Reid said. “Our guys buckled down. They took that challenge. They worked hard this week and they started with that.”

It didn’t help the Vikings’ cause that they got little production from their wide receivers.

Adam Thielen tried to go after hurting his hamstring against Detroit and missing last week’s game against Washington. But after testing it during warmups and giving it a go, Thielen didn’t even last through the first quarter before spending the rest of the game on the sideline.

Stefon Diggs, who was fourth in the league with 704 yards receiving coming into the game, was held to one catch for 4 yards. His biggest impact was a 12-yard end-around.

“Preparation is key,” Chiefs defensive tackle Chris Jones said. “We held their rusher for under a hundred yards. Cook’s been playing some of the best ball in the NFL. We were fortunate enough to get the win and execute on defense, and we’ve got to execute next week.”

? Arterial Daily Poll
The Packers get crushed by the 49ers in the NFC championship game 37-20. Is Aaron Rodgers right, do the Packers still have a window to win a Super Bowl?