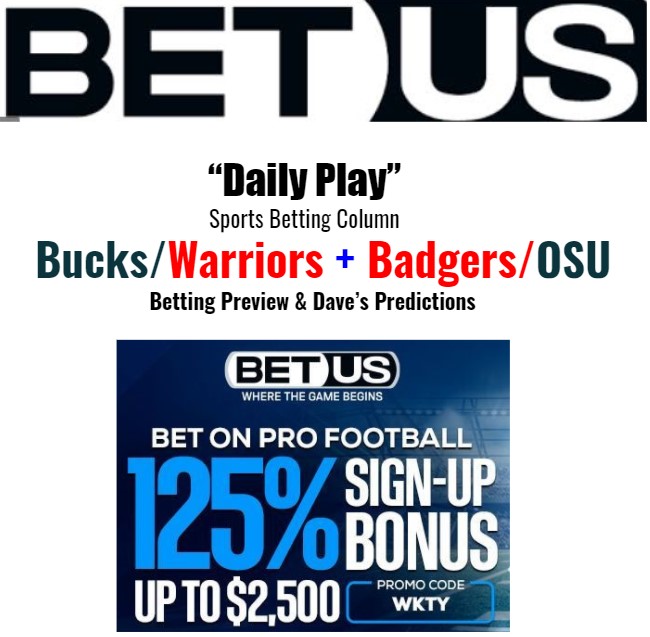 Tonight the Bucks are back on WKTY looking to avenge their second straight loss to the Charlotte Hornets on Monday, falling 103-99 as LaMelo Ball dropped the game-winning shot with 15 seconds on the clock. Terry Rozier scored 27 to lead the Hornets while Khris Middleton (27 points, 11 assists) and Giannis Antetokounmpo (26 points, 13 rebounds) both posted double-doubles for the Bucks in a losing effort.

The reigning NBA champions have hit a rut, losing four of their last five games. Starting point guard Jrue Holiday has missed the last three games, forcing Middleton to occasionally play in that role. Although Middleton has scored 27 points in consecutive outings, he also committed 13 turnovers over the two meetings against the Hornets, a sign of his inexperience in the position.

The Warriors lost 116-108 to the Memphis Grizzlies in their last game on Tuesday as Ja Morant led all scorers with 29 points in the win. Steph Curry posted his second triple-double of the season with 27 points, 10 assists and 10 rebounds, but no other player scored more than 14 points for the Warriors.

Klay Thompson played 20 minutes in his second game back after returning from an Achilles injury and scored 14 points while adding three assists and three boards. The return of the star shooting guard will give Golden State a lot more to work with offensively, especially from beyond the arc.

Draymond Green (calf) is out while Jonathan Kuminga (knee) is probable.

The Badgers have picked up five straight victories since losing to the Buckeyes on Dec. 11, including a 70-69 road win at Maryland last time out on Sunday. The Badgers have covered three in a row after an 0-3 ATS skid from Dec. 11-29.

In rather uncharacteristic fashion, Greg Gard’s Badgers have cashed the OVER in five consecutive games, while going 9-3 across the past 12 outings overall. Unlike Ohio State, Wisconsin has been able to stack covers, going 7-1 ATS in the past eight following a cover, and 8-2 ATS in the previous 10 following a straight-up win. They’re also 9-3 ATS in the past 12 games against teams with a winning overall mark.

The Badgers have also cashed the OVER in seven of the past nine against teams with a winning overall record, while going 5-1 in the past six games at home, too.