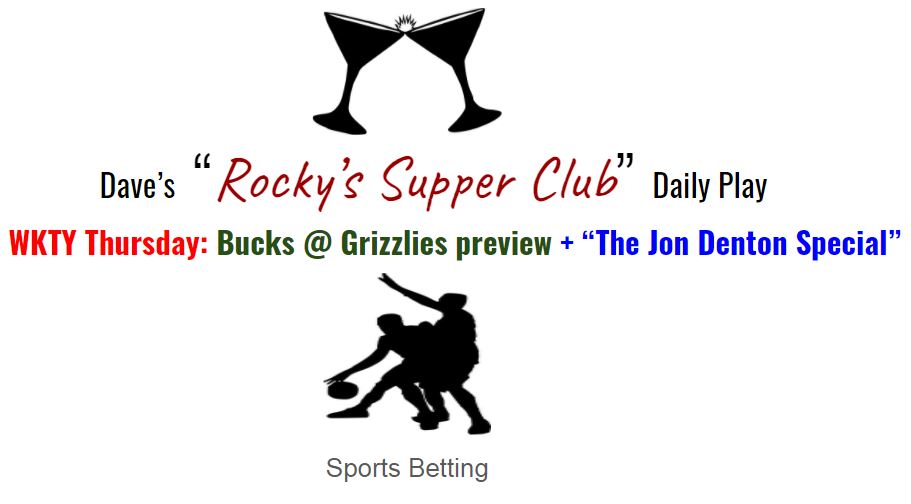 What’s on the table today?: Betting preview for tonight’s Bucks @ Grizzlies game on WKTY along with another “Jon Denton Special”.

Thursday morning Jon gave us another JDS with him taking IOWA (-16) against the lowly Nebraska Cornhuskers who just beat the stuffing out of Rutgers on Tuesday night.

In Jon’s breakdown of the betting trends, when a team like NEB has a big-time signature win, especially after losing a top-tier guy (Teddy Allen), they generally follow that up with a FLOP of epic proportions which is why Jon was “OK” with laying the 16 points on Iowa.

Should be a good game to watch tonight (Thursday) on the Big Ten Network starting at 8p (CT).

The Bucks are on the road facing the Grizzlies in the final game before theAll-Star break for Milwaukee.

In the most recent game between these two teams (8/13/2020) Memphis was able to get a 119-106 win over the Bucks. Milwaukee is coming into tonight’s game fresh off the heels of an embarrassing home loss to the Denver Nuggets 128-97, while the Grizzlies are riding high off of two consecutive wins, including a team record 49 point win over the Houston Rockets on February 28th.

The Bucks opened as a (-6.5) favorite in Vegas, and has since been bet down to MIL (-6) across the board. The total for this game opened at 234 and has held steady at that number.

Looking at some recent trends thanks to Covers.com you’ll note that both Milwaukee and Memphis have been covering ATS bets fairly well recently, but the hot play should be on the Over/Under with the UNDER play emerging as one of the best bets for tonight’s game.

Without needing to do too much homework at all you can see that the UNDER play on tonight’s total of 234 is definitely something to consider if you’re making a play on this ball game.

Something else you may want to watch for though is the Grizzlies on the Moneyline where they are getting great value at around +205 in many spots.

I will say this; I’m a Bucks fan. However, the Bucks have been a model of inconsistency this season so far, and I could easily see the Grizzlies stealing a victory this evening in a tight, defensive minded game before the ASG break.