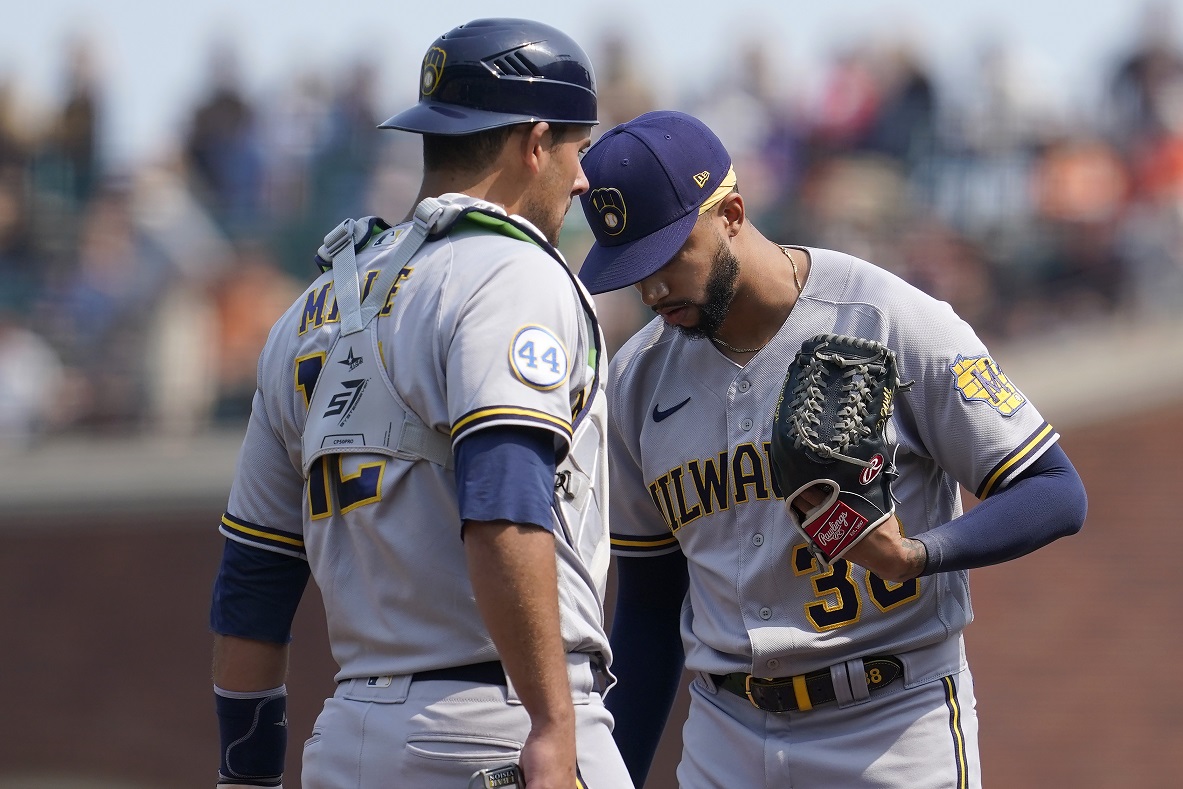 Bob Uecker back on the call and Freddy Peralta returns to the mound Friday, as the Brewers begin a three-game home series against the St. Louis Cardinals. Pregame at 6:35 p.m. on WKTY. Tune in on 96.7 FM / 580 AM

A day after falling out of first place for the first time since May 30, the Giants (85-49) moved into a tie atop the NL West with the idle Los Angeles Dodgers. Austin Slater also connected, and Logan Webb pitched seven sparkling innings.

San Francisco had dropped four in a row.

Milwaukee (82-53) wasted a terrific performance by Eric Lauer, who tossed seven innings of three-hit ball. The NL Central leaders had won four in a row.

Darin Ruf put the Giants ahead to stay with a two-out RBI double off Devin Williams (7-2) in the eighth. Estrada followed with a drive to left for his fourth homer.

ST. PETERSBURG, Fla. (AP) — Eduardo Rodriguez pitched four-hit ball into the seventh inning, and the Red Sox earned a split in their four-game series against the AL East-leading Rays.

Garrett Richards replaced Rodriguez (11-7) with two on and no outs in the seventh, and the right-hander escaped the jam with a pair of strikeouts and a fly ball. Richards earned his second save, finishing a five-hitter.

Rays rookie Wander Franco extended his on-base streak to 33 games with a seventh-inning walk, but he left after the at-bat with a headache.

Bobby Dalbec drove in two runs for Boston, which has a two-game lead over Oakland in the race for the second AL wild card.

Jorge Soler also homered and Austin Riley had a two-run double for Atlanta, which stayed two games ahead of Philadelphia in the NL East.

Five Atlanta relievers combined for six scoreless innings after Touki Toussaint struggled. Jacob Webb (2-2) got six outs for the win, and Will Smith worked the ninth for his 30th save in 34 chances.

The Braves went ahead to stay with three runs in the fifth. Freddie Freeman led off with a double against Yency Almonte (1-3). Freeman advanced on Riley’s single and scored on Dansby Swanson’s sacrifice fly.

Duvall then hit a drive to deep left for his 30th homer, lifting Atlanta to a 6-5 lead.

WASHINGTON (AP) — Andrew McCutchen drove in four runs and Philadelphia erased a six-run deficit on its way to the three-game series sweep.

The Phillies overcame a disappointing start from Aaron Nola and rallied against the Nationals’ bullpen for their sixth consecutive win. Philadelphia pulled within two games of idle Cincinnati in the race for the second NL wild card.

Juan Soto homered and drove in four runs for Washington, which has dropped five in a row and 21 of 27. Andres Machado (1-1) got the loss.

Sam Coonrod (2-2) pitched a scoreless seventh for the win, and Ian Kennedy worked the ninth for his 22nd save.

NEW YORK (AP) — Dominic Smith broke a seventh-inning tie with a pinch-hit RBI single, sending the Mets to the win.

Marlins leadoff batter Miguel Rojas and Mets counterpart Jonathan Villar each homered on the first pitch they saw, the first time that’s happened in a major league game since at least 1985, according to the Elias Sports Bureau.

Statisticians at Elias were unable to go back any further with certainty because prior pitch-count records aren’t precise.

Francisco Lindor doubled home a run for the Mets and scored on a balk by Sandy Alcantara (8-13).

The teams were rained out Wednesday night, one day after acting Mets general manager Zack Scott was arrested on charges of driving while intoxicated, hours after attending a fundraiser at team owner Steve Cohen’s house.

Jeurys Familia (9-3) pitched an inning for the win, and Edwin Díaz got three outs for his 28th save.

DETROIT (AP) — Jed Lowrie hit a three-run homer in the first inning for the first of Oakland’s eight two-out runs against Matt Manning.

Mark Canha followed Lowrie’s shot with another homer for 4-0 lead. It was the 14th homer of the season for both Lowrie and Canha.

Khris Davis’ RBI double in the fourth made it 8-0 before the Tigers battled back by scoring six runs.

McKenzie (4-5) showed no ill effects from his recent shoulder fatigue. He yielded one run and two hits while improving to 3-0 with a 1.57 ERA in six appearances against Kansas City.

Emmanuel Clase pitched the ninth for his 20th save in 24 chances.

CHICAGO (AP) — Sergio Alcántara scampered home when second baseman Wilmer Difo mishandled a popup in the 11th inning, and the Cubs beat the Pirates for their third straight win.

Rafael Ortega and Ian Happ homered for Chicago, and Alcántara logged the first three-hit game of his career. Codi Heuer (6-2) got three outs for the win.

Alcántara began the 11th on second base and advanced on Ortega’s sacrifice bunt against Sam Howard (2-3). Happ then sent a high fly to second, where Difo committed the game-ending error.

It’s the first three-game win streak for the Cubs since a five-game run from June 8-13.

The last-place Pirates wasted a stellar start by Mitch Keller, who struck out eight in six scoreless innings. Colin Moran hit a three-run homer in the first, and Bryan Reynolds finished with two hits.

0
0   0
previous No. 12 Wisconsin, No. 19 Penn State eager for fresh starts
next Uecker in the booth, Peralta back on mound, as Brewers begin series back home vs. Cardinals
Related Posts