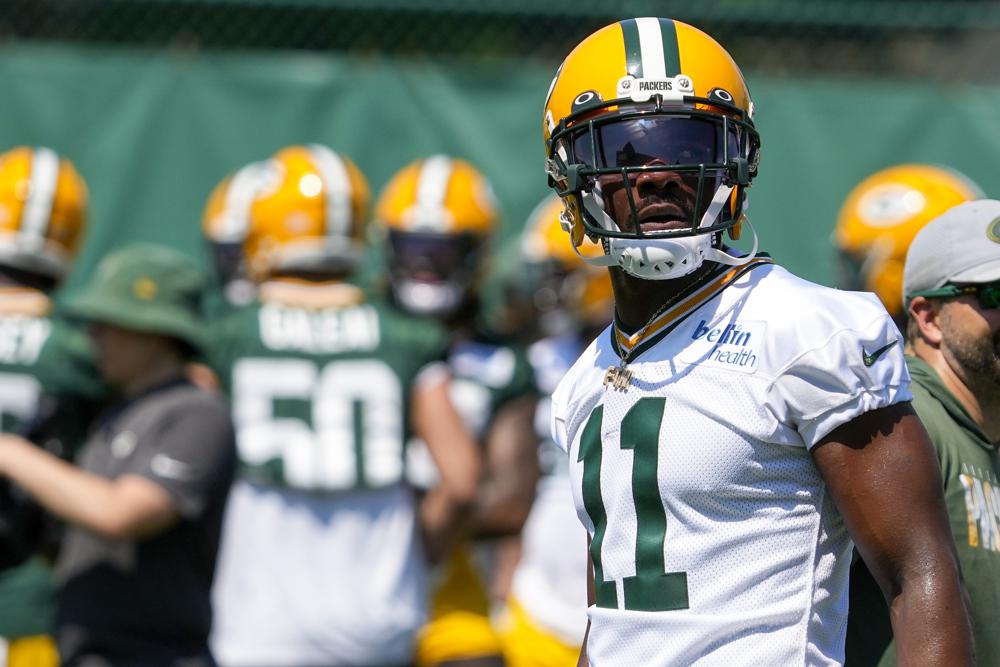 “I’ll never doubt myself,” Funchess said this week during the Packers’ mandatory minicamp. “The moment you start doubting yourself, you lose. I like to win. I don’t like to lose. So I guarantee I’ll keep a smile on my face and we’re going to be dancing a lot.”

Funchess signed with the Packers in spring 2020 but still hasn’t played for them. He hasn’t appeared in an NFL game since fracturing his collarbone while playing for the Indianapolis Colts in the 2019 season opener.

He opted out of the 2020 season to help his family through the pandemic. In his Instagram post announcing that decision, Funchess said some of his closest relatives “have experienced the life-threatening impact of COVID-19.”

“Family over everything,” Funchess said this week. “My family was going through some things. I felt it was best for me to be there for my family.”

That long time away from football made Funchess particularly excited about working out with his new teammates. He wants to show he still has the skills that made him an effective red-zone threat for the Carolina Panthers earlier in his career.

“I was eager, anxious this last week just to get back around big, grown men and the team, the camaraderie, just the atmosphere,” Funchess said.

Funchess had 21 touchdown catches with Carolina through his first four NFL seasons. His best year came in 2017, when he caught 63 passes for 840 yards and eight touchdowns.

While drops have been a concern at times, Funchess can cause plenty of matchup problems with his 6-foot-4 frame. Packers coach Matt LaFleur noted this week that Funchess “sure looks the part, there’s no doubt about that.”

“We are excited about him and just the depth that he adds to that room, the competition that he brings to that room,” LaFleur said. “Here’s a guy that’s played at a high level in this league. He was on that team that went to the Super Bowl in Carolina, so we’re excited just about his mentality and how he comes out on a daily basis.”

Funchess believes he’ll be able to do everything he did while at Carolina.

“I’m ready to play,” Funchess said. “I’m 27 years old. There’s nothing to question. I’m about to step into my prime, probably this year, next year, whatever it is.”

This minicamp has allowed Funchess to get to know his teammates better, though he was trying to keep in touch with them before now.

All-Pro receiver Davante Adams said he had communicated with Funchess via FaceTime six or seven times.

“I feel like I’ve known him longer than what I actually have,” Adams said. “He’s a great dude, competitor, (who’s) got high expectations for himself. He’s a dog, I can tell that. He’s as big as hell. He’ll be able to offer up a lot to us. He’s got the right mindset.”

Funchess just needs time to adapt to a new offense and a new quarterback, whoever that might be. He signed with the Packers believing he’d be playing alongside Aaron Rodgers.

With Rodgers’ future uncertain as he skips mandatory minicamp, Funchess doesn’t know who will be throwing him passes this fall.

Funchess says the situation isn’t entirely unfamiliar for him. He signed with Indianapolis in March 2019 assuming his quarterback would be Andrew Luck, who unexpectedly retired that summer at the age of 29.

Funchess says that experience helped him realize the approach to take toward this situation.

“We need to just, all the media and everybody else, they need to understand the man handles his business and then we play with the 11 we have on the field, at that time,” Funchess said. “I’ve been there to the dance. I’ve been there with experience. You play with the 11 you have. You do your best, every play. That’s how you win. I need everybody, personally, just to let him do what he does and understand the 11 that we line up on the field, that’s who we’re going to have fun with at that time.”

NOTES: The Packers signed 6-7 quarterback Jake Dolegala and released defensive lineman Anthony Rush. Dolegala, an undrafted free agent out of Central Connecticut State, spent 2019 as the Cincinnati Bengals’ No. 3 quarterback and spent parts of last season on the New England Patriots’ practice squad. … The Packers announced they won’t have any pandemic-related attendance restrictions this season. They also plan to welcome fans to training camp.