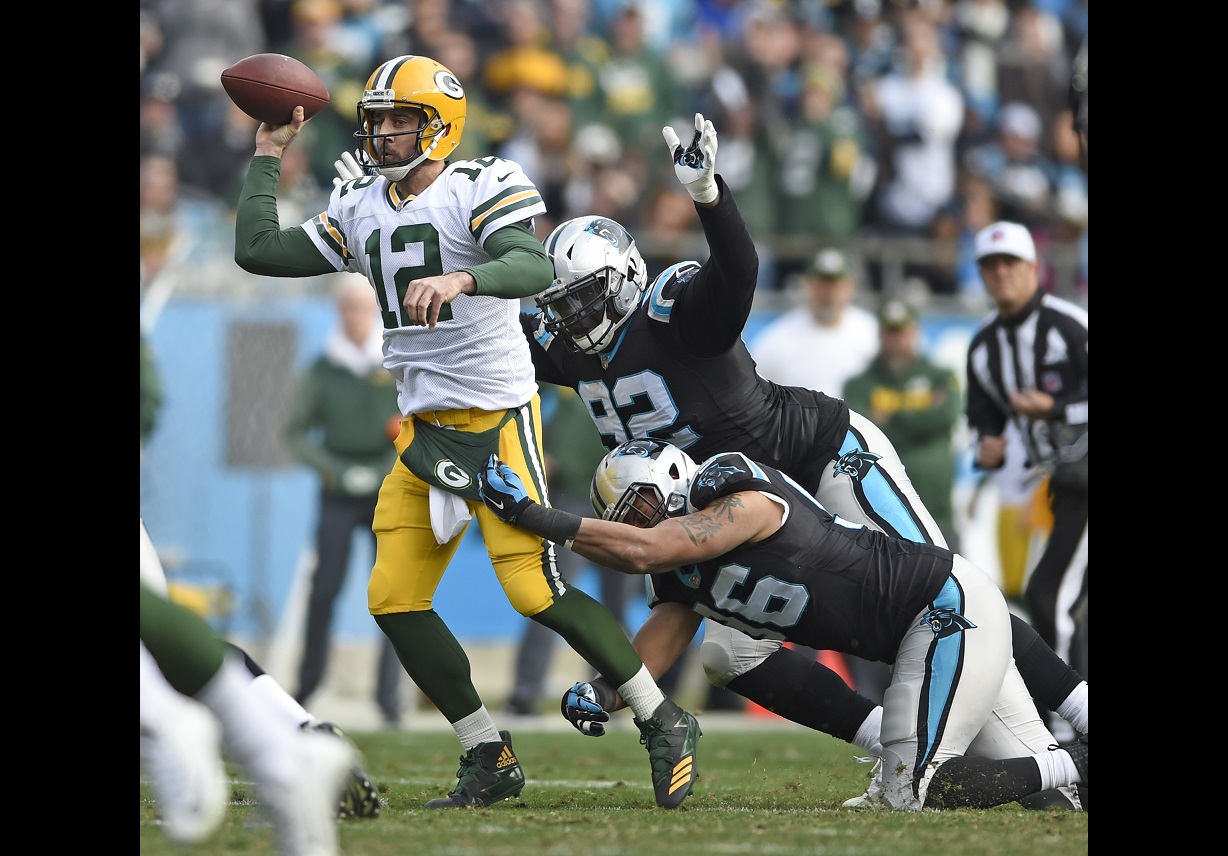 CHARLOTTE, N.C. (AP) — Aaron Rodgers couldn’t save the Green Bay Packers — but he sure gave it a heck of a try.

For a moment it looked as if the two-time league MVP was about to spin his magic to lead the Packers back from a 14-point fourth-quarter deficit on Sunday against the Carolina Panthers.

But in the end it was a fourth Green Bay turnover — this time a fumble by wide receiver Geronimo Allison with 1:48 left in the game — that spelled doom for the Packers in a 31-24 loss, and one that may ultimately keep them out of the playoffs for the first time since 2008.

Rodgers said it has not exactly been the fairytale season he was hoping for.

“As I lay in that surgery bed eight weeks ago thinking about this moment, I was hoping it would go a little differently,” Rodgers said of the Packers season.

“I’m proud of our guys for the way they have played the last few weeks. Today was disappointing. I didn’t play well. I hold myself to a high standard and I expected to play well, but I made too many mistakes.”

Rodgers had good velocity on his passes at times, throwing for 290 yards and three touchdowns. He even ran for a few first downs in his first game back from a broken collarbone, sliding before being hit.

But he had a few mistakes as well.

That included overthrowing Randall Cobb for an interception.

It included another interception when he was trying to throw a pass away, but didn’t get enough on the ball.

And it included throwing a pass in the dirt to Allison in the red zone.

“I felt pretty good, but I just missed some throws,” said Rodgers, who threw three interceptions for the first time since 2009.

“I missed some that I’m used to hitting. I’m disappointed in my performance today. Obviously, I didn’t play well.”

The Packers ran the ball for 120 yards and averaged 6.3 yards per carry, but the score dictated that Rodgers throw the ball more in the second half after the Packers surrendered a 14-10 halftime lead. He attempted 45 passes.

Carolina didn’t sack Rodgers in the first three quarters, but had three in the fourth.

“We started to figure out where he wanted to escape,” Panthers defensive end Wes Horton said.

Panthers coach Ron Rivera preached to his team all week about not getting caught up in the hype of Rodgers’ return.

“That’s the thing, everyone made it about Aaron Rodgers but it’s about us,” said Panthers safety Mike Adams, who recovered Allison’s fumble to seal the victory. “We’ve been here, and he just got back.”

Adams said the Panthers disguised coverages and tried to confuse Rodgers in his first game back.

“He’s a great quarterback,” Adams said. “Take nothing away from him. We just made a lot of plays on the ball.”

Packers coach Mike McCarthy said Rodgers did some good things, but it’s hard to win when you turn the ball over four times.

“I thought their defense played aggressive,” McCarthy said. “Good defense. I respected them coming in. They challenged the line of scrimmage with a lot of different looks.

“Our goal was to get the ball on the perimeter. When we got the opportunity to run I think we ran it well. But our passing game wasn’t quite where it needed to be.”

The loss leaves the Packers at 7-7 and on the outside looking in at the NFC wild-card picture.

The Panthers (10-4) are the top wild-card contender, while the Falcons and Seahawks each had eight wins coming into the weekend.

The Seahawks lost Sunday, while the Falcons play Monday night.

“We’re not out of it yet, but we have had a great run around here and as long as I am here I’m confident that we will be in the mix every single year,” Rodgers said.