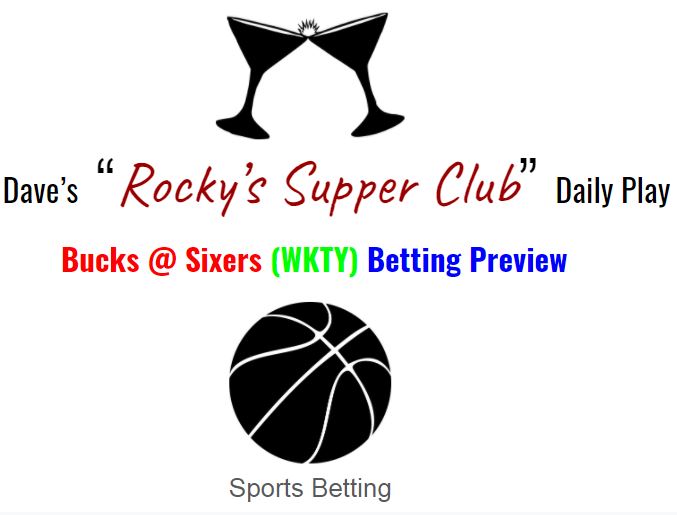 Bucks vs Sixers 2021: Round One (betting preview)

Bucks vs Sixers 2021: Round One (betting preview)

Tonight on WKTY for the first time this season, the Milwaukee Bucks (number 3 in the East) will be facing off against the Philadelphia Seventy-Sixers (number 1 in the East) in Philly for what should be a great game on our station.

The Bucks are currently riding a hot streak, winners of four games in a row, and nine of their last ten overall. During that stretch of time Bucks are finding new ways to gel, better defense, and a more consistent offense, leading to better overall production and of course, more wins.

That Giannis is playing at the same type of MVP level we’ve seen over the past two years doesn’t hurt either.

Jrue Holiday’s return from a ten game absence dealing with COVID-19 has also been a huge boon for Milwaukee who struggled mightily without him, losing the last five games without Holiday by more than ten points each. Since Jrue has returned to the starting lineup two games ago he’s seen 32 minutes in each game and scored 15 and 18 respectively. This is important because the Sixers can play some nasty, rugged defense, and they sit near the top of the league in steals (8.3) and blocked shots (6.3) per game, and Holiday’s offense and play-making will be key for the Bucks if they hope to win.

For the Sixers, things have pretty much been golden since the hiring of Doc Rivers as head coach. Ben Simmons is no longer asked to carry the water as a point guard, Seth Curry is having a career year (playing nearly 30 minutes a game and averaging 13 points) while adding much needed three-point shooting to the Sixers who had no real options from behind the ark last year. Philly, like the Bucks, are also riding a hot streak even in the midst of losing Joel Embiid for a couple of weeks (at least) due to a bone bruise in his knee, having won six games in a row, and ten of their last twelve overall.

The miss tonight of Joel Embiid for the Sixers will be significant, however, Dwight Howard is stepping up in a big way in Embiid’s absence. In last night’s close 99-96 win over the Knicks, Howard came off the bench and played 28 minutes, scored 11 points, grabbed 12 rebounds, and blocked 3 shots. That my friends will get-it-done off the bench and could be a problem for Milwaukee tonight.

Now, for a preview of how we might bet this game lets consider the following: the Bucks have NOT been a strong play ATS (against the spread) this season at all, coming in at 19-20 ATS. Since Milwaukee is favored currently by six (-6), with a line open of (-5) you must consider how they’ve fared ATS. Not well, be careful of this play.

Philadelphia has been better ATS this season with a record of 22-16-2, and as a (+6) dog, that might be a play worth considering.

However, the really strong play on tonight’s game, at least according to the recent trends for BOTH teams is this. Play the OVER 234.

Take a look at these trends for the OVER/UNDER play for both the Bucks and the Sixers from our friends at Covers.com and I think you’ll see the same thing I do; all signs point to taking this game OVER 234.