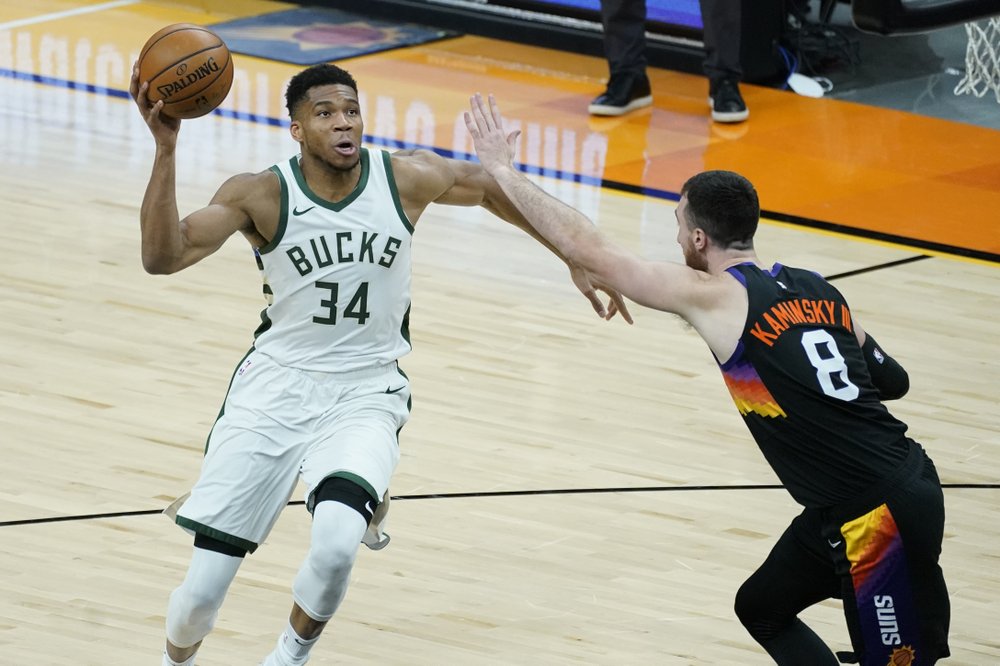 Pizza, smoothie and wings: Focused Antetokounmpo on a roll

Pizza, smoothie and wings: Focused Antetokounmpo on a roll

WASHINGTON (AP) — Giannis Antetokounmpo didn’t realize he and the Milwaukee Bucks had won nine of 10 and wasn’t totally certain the Philadelphia 76ers are in first place in the Eastern Conference.

The NBA’s back-to-back reigning MVP isn’t looking too far ahead. Playoffs? Playoffs? Antetokounmpo isn’t even focused on the Bucks’ first game this season against the 76ers coming up Wednesday night.

“I’m looking forward to taking my day off tomorrow, enjoy my pepperoni pizza, my smoothie, my chicken wings,” he said. “When the time comes, we’re gonna have a game plan, coach is gonna give us the game plan and I know my team is gonna be ready. I’m gonna try to be ready, too.”

A hyper-focused on the moment approach is helping Antetokounmpo play some of his best basketball. Antetokounmpo has registered three consecutive triple-doubles since being named MVP of the All-Star Game, and the Bucks are rolling along with him.

“It’s good stuff by Giannis, for sure,” coach Mike Budenholzer said. “He’s got a great feel for the game. I think the way he’s playing with the pass, the way his teammates are shooting, the 3-point threats that are out there, I think he sets the table the whole game and he reads it well. And, late, he’s able to make the plays and finish.”

Antetokounmpo shakes off the idea he has an innate instinct of when to pass the ball and when to take over a game. He insists he’s not Kobe Bryant or league-leading scorer Bradley Beal, but rather just “a basketball player.”

That’s just part of his effort this season to stay in the present.

“When I’m gonna be taking my nap, going through my routine, going through film, taking my 20-minute walk every day, I’m gonna be in that moment,” he said. “I’ve done a better job this year just enjoying this moment and not letting my mind explore as much and start thinking about playoffs, outcome, championship, no championship because at the end of the day, this is a stressful job that we’re doing. You’re gonna stress yourself out.”

Antetokounmpo isn’t stressing about another early playoff exit, six months since Milwaukee was bounced by Miami in the second round of the NBA’s bubble at Disney World. He’s confident he’ll be ready when that situation arises later this spring.

His next challenge is a matchup at Philadelphia, which won’t have MVP candidate Joel Embiid because of a bruised left knee.

Antetokounmpo knows the key is playing good defense, but in his maturation process, he’s also more worried about the process than the result.

“Are they No. 1 in the East? it’s gonna be a tough one,” he said. “Hopefully we can make some shots and no matter the outcome just leave Philly better and just try to end the road trip on a good note. Not winning — playing good basketball. Remember that.”

The joy is showing on the court.

“We don’t want to, (but) we’re gonna have a bad stretch, too,” he said. “At the end of the day, we’re having fun. We’re enjoying what we’re doing right now.”

0
0   0
previous Travis Shaw back with Brewers, competes for spot at 3B
next Bucks vs Sixers 2021: Round One (betting preview)
Related Posts