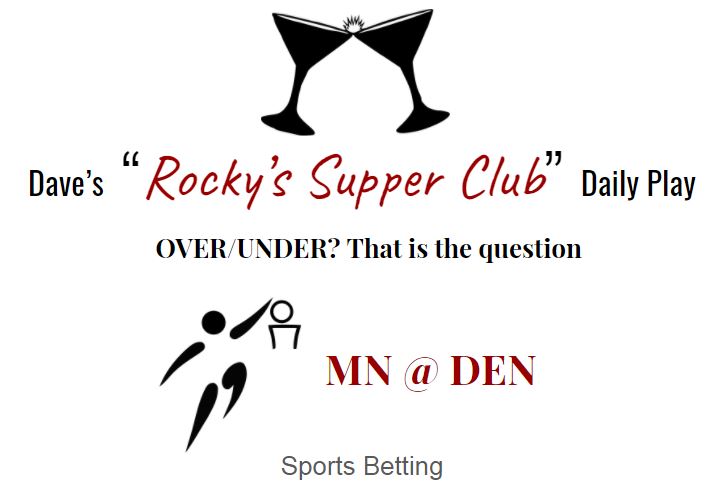 Can the Wolves hang in Denver?

Can the Wolves hang in Denver?

How did I get here?: I started 2021 with what I thought would be a safe bet, the Milwaukee Bucks (-13.5) versus the Detroit Pistons without Blake Griffin, coming off a 30 point blow-out of the Bulls on Friday night.

Considering the Bucks were also a stout 13-6-2 (ATS) in their last 21 games coming off of two days rest this should have been a cover all-day for Milwaukee. However, something was happening with the line, moving from (-13.5) to (-11) to (-16), back to (-11) and finally settling at (-16) before tip. I reached out on Twitter for answers and was left hanging. Nobody had a clue what was driving this line so wild.

Apparently somebody knew something, perhaps they had in-tell that the Pistons’ Derek Rose was gonna ball-out in 25 minutes off the bench and score 24 points to keep the game close, and ultimately ruin my “Daily Play” with a Bucks 125-115 win? Maybe it was the WILD swings from NBA teams, blowing out clubs, and getting blown out the next night that had the number hopping like a pin-ball?

Overall last night was a good game for a Bucks fan, bad one for a BETTOR. I hope I can be BETTER in today’s play…

What’s on the table today?: Taking a trip up to the “Mile High City” and placing a wager on tonight’s DENVER vs MINNESOTA T-Wolves match up at the Pepsi Center.

The Nuggets are coming into this game (which is game 2 of a home stand vs MN) winning on Sunday 124-109. The T-Wolves are without star center Karl Anthony-Towns (indefinite) while the Nuggets will be missing Michael Porter Jr. Denver is a high scoring offense putting up 116 a night, but they also surrender a ton of points, allowing the same 116 per contest.

Denver is also on a nice betting trend entering tonight’s game, over the last three seasons when the Nuggets have allowed more than 105 points in 5 straight games, the OVER is hitting at a really nice clip of 66.7%. That’s important because Denver has indeed allowed over 105 points in each of their past 5 games, the lowest amount they’ve allowed being 106 to the Suns on New Year’s Day.

Minnesota on the other hand is scoring at a below average clip of 106.2 per game (25th in the league), BUT are allowing a whopping 119.5, which is fourth WORST in the league. As a matter of fact, the Timberwolves have allowed no less than 124 points in their last four games, all losses.

This one has OVER the total of 226 written all over it!

If recent indications are true, this game should be a free-flowing, defense free (for the most part) type of ordeal which could be fun to watch if you’re a T-Wolves fan, Nuggets fan, or deranged gambling addict like me!