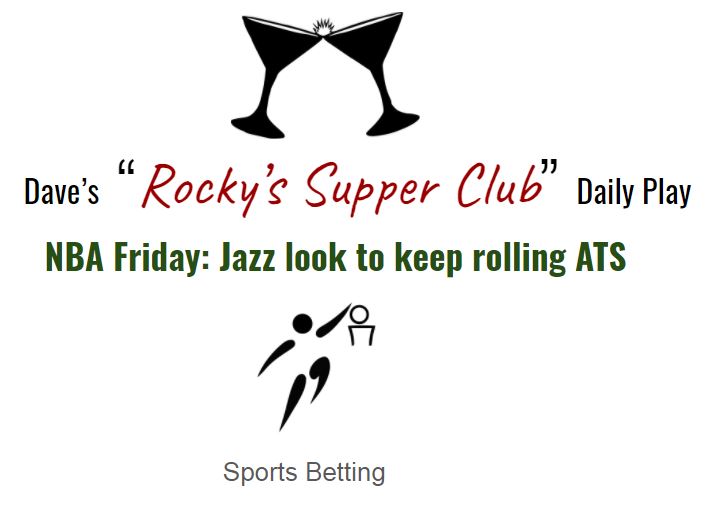 What’s on the table today?: A preview of two games on the NBA docket for Friday (2/19/2021) with the Utah Jazz looking to keep rolling ATS & the Denver Nuggets looking to get back on track versus the Cleveland Cavaliers.

If you haven’t been keeping up with the column, or the NBA in general perhaps you’ve missed the biggest news in sports betting for 2021…the UTAH JAZZ are on a historic streak ATS to the tune of 19-1-1 over their last 21 contests.

To put that into historical perspective there’s only been one other team in the history of the NBA who’s ever had a better 20 game streak ATS; the 2014-15 Atlanta Hawks, who went 19-1 ATS from Dec. 15, 2014 through Jan. 25, 2015. For Bucks fans who really want to get pissed right now…Mike Budenholzer of the now sinking Milwaukee Bucks, was the coach at the time.

Utah is playing some seriously solid ball, and like Coach Bud’s 2014-15 Hawks, Quinn Synder of the Jazz is also a Gregg Popovich disciple meaning his teams are going to play smart, gritty ball. Rudy Gobert has been phenomenal averaging over 14 points, 13 rebounds and swatting nearly 3 shots a game while Donovan Mithcell continues to ascend as one of the brightest young star guards in the league, putting up a robust 24 plus points, grabbing 4 and a half boards and getting his teammates involved averaging over 5 assists a contest.

When you factor in the Jazz’s bench production from the likes of Jordan Clarkson, a former Lakers and Cav castoff, who’s averaging a career best 18.2 points in just 26 minutes of action a night, you KNOW this team is going to give opponents fits. The Jazz have assembled a very potent roster and during their current 9 game winning streak they’ve beaten the “who’s who” in the NBA with wins against the Bucks, Celtics, Sixers and most recently the Clippers (who the face tonight).

Simply put the Jazz are for real, not going anywhere, and have to be considered a strong play in tonight’s game versus the Clippers as -4 favorites. Considering that Utah, as a -3.5 favorite on Wednesday night, beat the Clippers by 18 points (114-96) you can see why again the SHARPS are leaning towards taking the Jazz again tonight ATS.

On literally every one of the sites I use for smart analysis, research and opinions you’ll see a consensus view that UTAH -4 tonight is the play, of which I agree. If you’re considering making this play, I’d make it as soon as possible as the line has already moved ½ point from (DEN -3.5 to DEN -4). If you’re reading this by game-time, there is a chance the line moves, and as we discussed before, any movement can drastically alter the approach to making the bet, so be careful!

The Denver Nuggets, much like the Milwaukee Bucks, came into the season with very high hopes and aspirations to be championship contending teams. While that still may end up being the case, as we assess the NBA landscape today it’s safe to say that both Denver (at 15-13 / 8th in the West) and the Bucks (at 16-13 / 3rd in the East) have both underwhelmed.

However, for the Nuggets, tonight offers good news and a really good shot to cover a -8 point spread against a dreadful Cavs team that’s going into full tank-mode. Cleveland has already decided to sit Andre Drummond until they can find a trade partner, and the young Cavs roster simply SHOULDN’T be good enough to muscle past this Denver team, even though they’re at home.

Both Oddsshark.com and StatSalt have the Nuggets winning tonight, covering the number, and have the game going OVER the total. Our friends at Covers.com also have some strong indications ATS that do not bode well for the Cavs at all, which is probably why many sharps aren’t paying much attention to this matchup tonight.

If I were making a play on this game tonight, I’d most likely play the Nuggets minus the points, however, this team, much like the Bucks, has made me a bit weary of placing action on them. I want to see this incredibly talented Nuggets team show some consistency before I start laying anything down on them again.