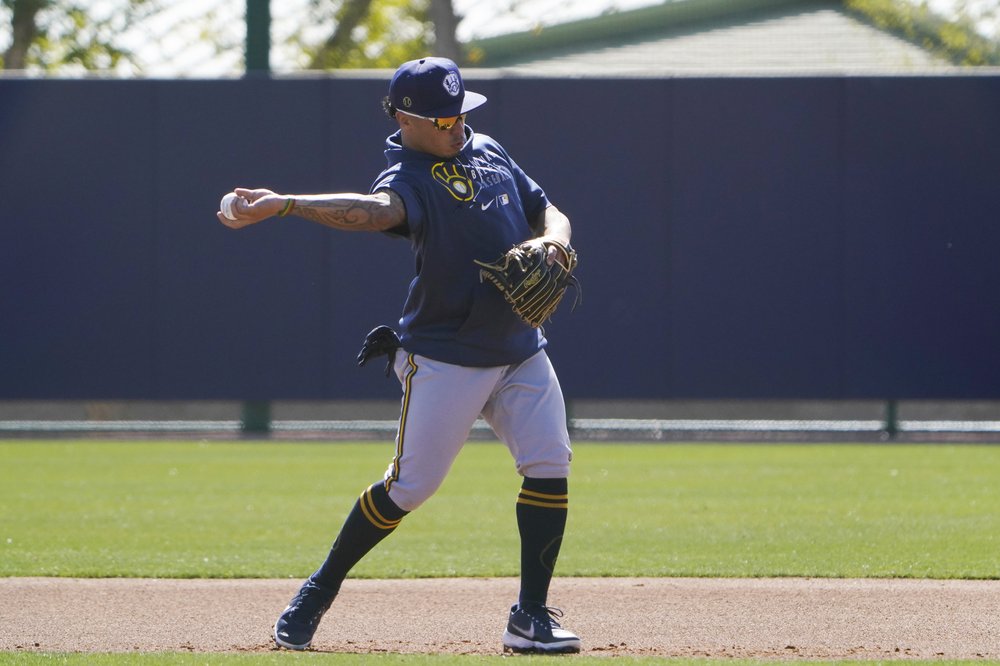 Brewers relying on offseason fielding upgrades to pay off

Brewers relying on offseason fielding upgrades to pay off

Whether they did it by design or responded to the market forces at work, the Milwaukee Brewers found an intriguing way to try gaining an edge over their NL Central rivals.

Rather than focusing on an offense that slumbered for much of last season, they added position players better known for fielding prowess. By signing former St. Louis Cardinals second baseman Kolten Wong and ex-Boston Red Sox center fielder Jackie Bradley Jr., the Brewers have four former Gold Glove winners on their roster.

Milwaukee also returns Omar Narváez, who was regarded as a suspect defensive catcher when the Brewers acquired him but emerged as one of the game’s top pitch framers last season.

“There’s a lot of defensive stalwarts out there — guys who have won Gold Gloves, guys who have the potential to win Gold Gloves,” Bradley said. “And I think that can only benefit our team, the pitchers, and we can kind of feed off that.”

But the Brewers didn’t field particularly well, either. Milwaukee was 23rd among all MLB teams in defensive runs saved, according to The Fielding Bible.

“We weren’t a good enough defensive team last year,” president of baseball operations David Stearns said. “Part of that improvement needed to come through some personnel change, and part of it needs to come from players who were here last year having better defensive years. And then part of how the offseason unfolded, the best opportunities for us to improve our team largely revolved around defensive-oriented players.”

Wong has a two-year contract worth $18 million and Bradley agreed to a $24 million, two-year deal that enables him to opt out and become a free agent again at the end of this season.

Wong and Bradley are left-handed hitters who should balance Milwaukee’s lineup. Wong posted an on-base percentage of at least .350 each of the last two years. Although Bradley’s career batting average is just .239, he hit .283 with an .814 OPS last season.

Even so, there’s little doubt both will make their greatest contributions in the field. Wong believes improved defense indirectly can boost the Brewers’ hitting as well.

“When you can hold teams to low numbers during the games, usually it keeps confidence in the clubhouse, keeps the confidence in guys knowing that one swing can give us a lead or tie the game,” Wong said. “We’re never out of it. That’s the beautiful thing about defense.”

Wong represents a defensive upgrade from Keston Hiura, who is moving to first base as the Brewers experiment at the infield corners.

The Brewers believe Hiura’s range will compensate for his relative lack of height and make him a quality first baseman. Orlando Arcia, the Brewers’ starting shortstop since 2018, is working at third base this spring along with Travis Shaw as the Brewers give Luis Urías a chance to compete at shortstop.

Bradley’s addition gives the Brewers a surplus of talent in the outfield.

When Cain opted out last season, the Brewers used Avisaíl García in center, even though the vast majority of his prior experience had come at right field. Now the Brewers have Cain, Yelich, Bradley and Garcia.

If Cain is slow to recover from a quadriceps injury, the Brewers can replace one Gold Glove winner with another by putting Bradley at center. If the Brewers are at full strength, they can start an all-Gold Glove outfield of Bradley, Cain and Yelich.

“That’s huge,” pitcher Brandon Woodruff said. “As a pitcher, it’s like, ‘Bring it on.’ Let’s throw to contact and let these guys go do what they’re good at.”

TOP PHOTO: FILE – Milwaukee Brewers’ Kolten Wong trains during the team’s spring training baseball workout in Phoenix, Tuesday, Feb. 23, 2021. Rather than adding a couple of sluggers to boost a lineup that struggled throughout the pandemic-shortened 2020 campaign, the Milwaukee Brewers have spent the offseason working to upgrade their defense. The additions of second baseman Kolten Wong and center fielder Jackie Bradley Jr. give the Brewers four Gold Glove winners on their roster. (AP Photo/Jae C. Hong)

0
0   0
previous The perfect-length race for coming out of a pandemic — the Paddy's Day .01k at Riverside Park
next Badgers get Penn State to open B1G tourney — an opponent La Crosse's Davis scored 17 against last time
Related Posts