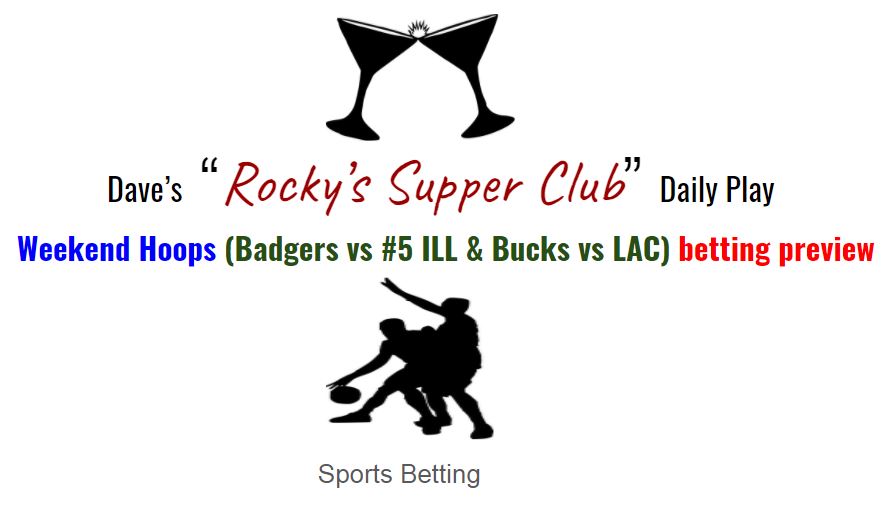 As we discussed in recent shows, and in recent columns, there are no lines for basketball games until the morning of the game. Too much can change in college and pro basketball for oddsmakers to put anything out on the game before the actual day-of the game at hand.

With that in mind let’s look at some of the recent trends, how these teams have performed ATS, and what the stats indicate that may give us a better understanding of how to play this game when a line is released.

First, we’ll start with the Badgers inability to win versus ranked opponents:

Wisconsin has lost five straight to ranked opponents. The Badgers last win vs a ranked opponent came against the then-No. 21 Minnesota Golden Gophers 71-59 on Dec. 31, 2020. Illinois took care of Nebraska by 16 at home on Thursday.

Next, let’s see how these teams have performed ATS (against the spread) this season:

Now we’ll look at how these two teams have fared over their last five outings, with the Badgers at 2-3 and the Fighting Illini at 4-1:

From there I’m estimating that the line on this game should be somewhere around ILL (-5 ½). If the Badgers are getting more than 5.5 or 6, I think the play is on WISCONSIN. However, if the number does come in at ILL -5.5 or lower, take the Fighting Illini.

The total for this game should also be fairly low, somewhere around 123 ½. I’d watch for some serious UNDER plays on this one as well, with Illinois being without Ayo and the Badgers simply having a hard time hitting shots.

This is another great matchup for the Bucks who are on a four game winning streak against a Clippers team that will be coming into Milwaukee after either losing twice in a row to the Memphis Grizzlies (LAC lost 122-94 to the Grizz on Thursday) or having split the series. The hopes for Bucks fans should be that the Clippers win tonight (Friday) and don’t come into the Fiserv Forum with the stench of back-to-back losses on them.

Prior to the Bucks 129-125 win over the Pels on Thursday, Milwaukee had covered it’s last three games ATS. As I predicted in this space yesterday that wasn’t likely to happen versus the Pelicans, and it didn’t. Milwaukee was a (-9) favorite before tip.  The OVER play did come in however with the total pegged at 242 ½ and came in well over that number.

On Sunday, I’m anticipating a line somewhere in the neighborhood of MIL (-3), but I would really caution you in jumping on that. This Bucks team, while improving, hasn’t been a steady enough ATS bet for me to lock in on. The Clippers likewise have been much too sporadic ATS for my money, meaning I’d probably stay away from this thing entirely ATS.

The play that I’ll be looking for here is going to be on the TOTAL, or a first/second half ATS play.

Total bets are always fun because it allows you to bet the game, get some action, but not commit yourself to a winner or loser per say, focusing just on the TOTAL points scored between the teams.

Scoring in the NBA has been furious this season, but the Clippers and Bucks are two teams that when properly motivated can lock down on D. That’s more of what I expect to see this Sunday, a tough defensive game with both teams knowing this is a showcase of a “potential” Finals matchup. Also, the fact that this game will be a day-time game, 2p CT, gives me reason to believe that this will be a lower scoring affair. NBA players, like all of us, get used to a certain start time for work..that’s about 7p most nights. When games get played during the middle of the day, oftentimes teams struggle to find their groove, and the UNDER can be an attractive play based on the TOTAL.

Again, the line and total for this game, as well as the Badgers vs ILL won’t be released until the day of the game, but do consider some of what I’ve laid out here if you’re inclined to make a play on either of these contests.

As always, best of luck and have a great weekend!