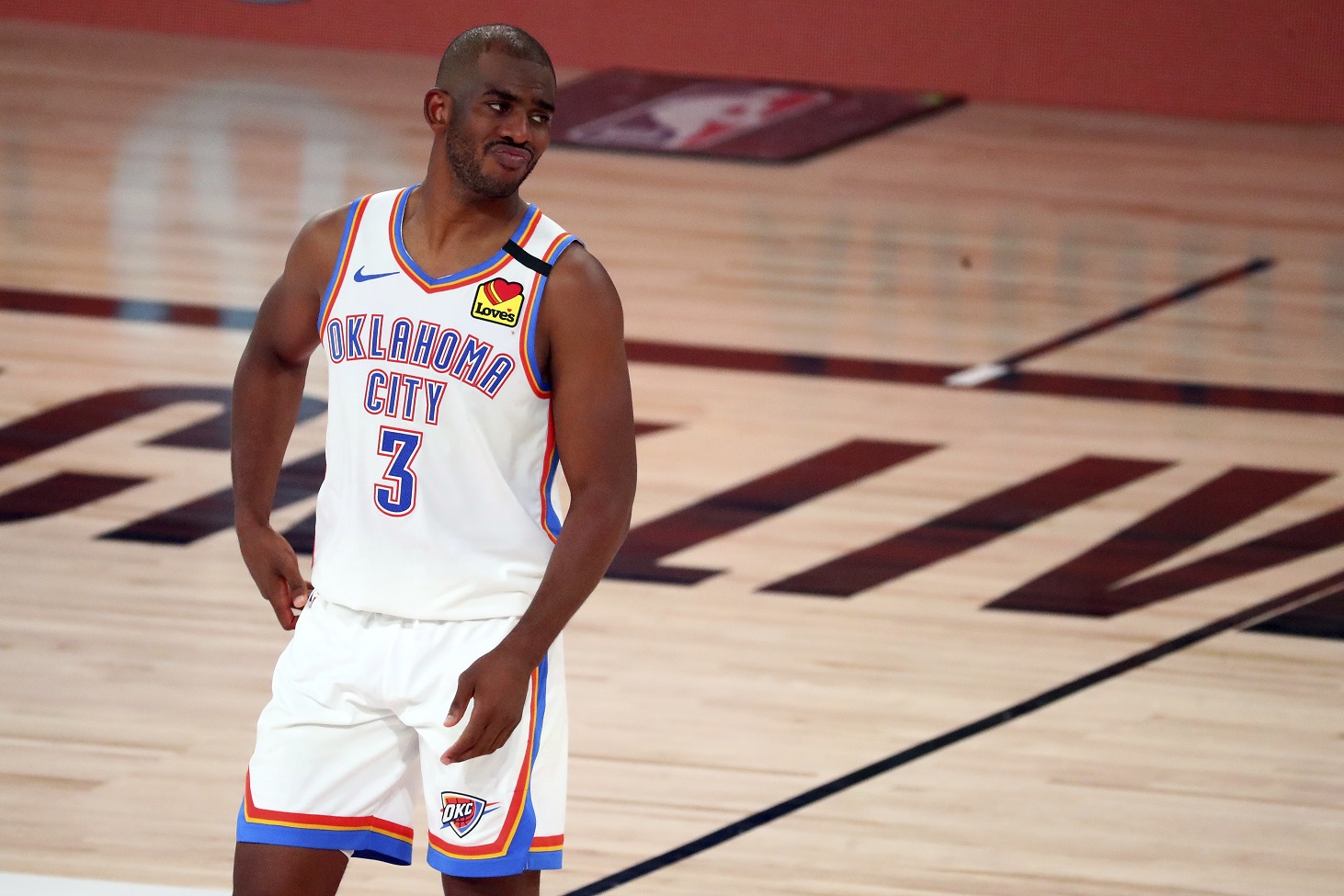 A year ago, rumors swirled that the Milwaukee Bucks might try and go after Chris Paul from the Houston Rockets.

A year ago is when the Bucks should have gone after Chris Paul.

In other words, they missed their chance.

Last year, Paul was viewed as a burden to whatever team acquired him over, not just his ridiculous contract, but the fact that he was just coming off another disappointing playoff appearance in which he got injured and then watched from the sidelines as his team was eliminated.

If the Bucks were going to get CP3, that was the time to do it. Stock for an undersized, overpaid, always injured point guard who’s kind of an a-hole couldn’t have been lower.

Now, the 35-year-old is like Jeff Bezos during a pandemic — his stock is up billions of dollars.

If a team wants to get Paul from the Thunder now, it’ll probably have to give up a pick, instead of get back picks.

On top of that, there are salaries to match.

How are the Bucks going to do that? You know, if they’d have re-signed Malcolm Brogdon, instead of trading him so billionaire owners could stay under the salary cap and avoid the luxury tax, the Bucks could have gotten Paul.

Then again, they’d have Malcolm Brogdon, a guy who, along with Larry Bird, Steph Curry, Kevin Durant, Reggie Miller, Steve Nash, Dirk Nowitzki and Mark Price, are the only players in NBA history to go 50-40-90.

Now, instead of having him for virtually nothing — Milwaukee did get a future first-round and two future second-round picks from Indiana for Brogdon — the Bucks would have to trade Khris Middleton for CP3.

The Thunder might do that but Middleton’s nearly as big a commitment and for a year longer.

Paul has two years and $85 million remaining on his contract, plus a player option worth $44 million for 2021-22 he will most certainly take.

It’s hard to say if the Thunder want any long-term contracts like that, putting them in a cap bind.

Which definitely means they don’t want Eric Bledsoe (signed through 2022) Brook Lopez (2022) or George Hill (2021). And that’s what it would take, those three contracts, to make the salaries work.

Milwaukee — with or without re-signing Giannis Antetokounmpo (pray emoji) — is capped out. The only roster moves they will be able to make are signing re-treads like Kyle Korver, Wesley Matthews and the recently retired Marvin Williams from here on out.

Having that four-year, $85-million Brogdon contract, on top of everything else, would have been a nice trade chip.

Then again, against a Miami Heat team that eliminated the Bucks in five games, Brogdon — who did get swept — did average 21.5 points (40% FGs, 37.5% from deep), 10 assists and 4.3 rebounds against Miami in the playoffs.

DISCLAIMER: Rick Solem is not an NBA salary cap expert.

0
0   0
previous Brewers put up 19 in shutout, Braves say, "Hold my beer."
next Interrupted by dog at presser, Anthony Davis should have begun asking the questions
Related Posts