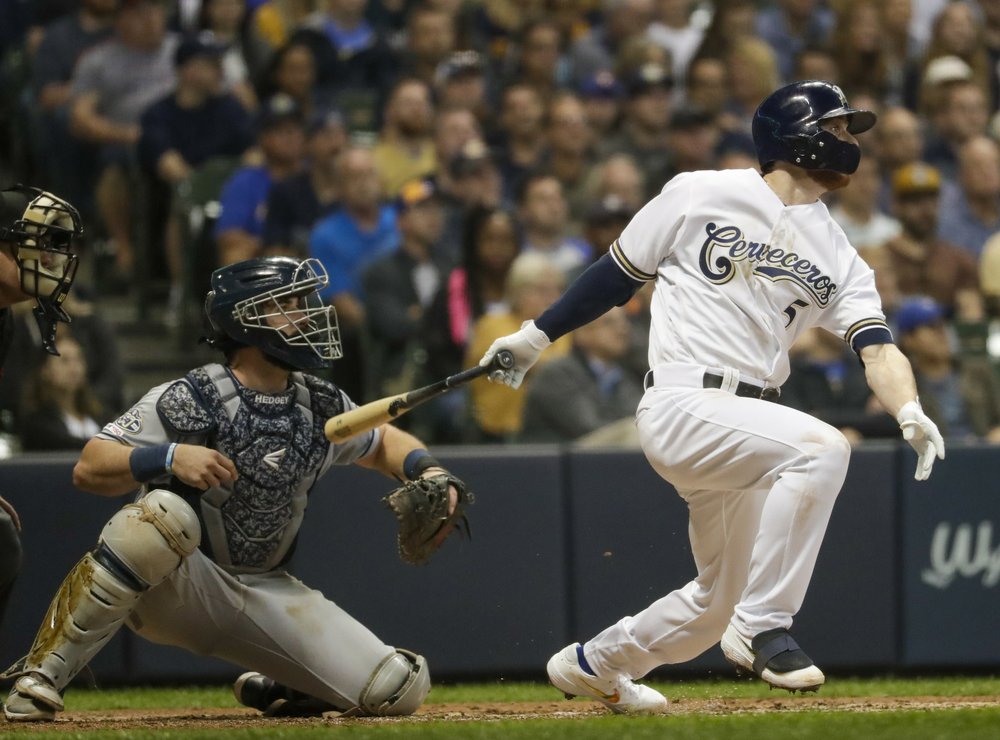 Spangenberg drove in three runs, including a tiebreaking, two-run triple in the fourth inning, and the Brewers beat the San Diego Padres 5-1 Monday night.

Milwaukee won for the 10th time in 11 games, remaining one game behind the Chicago Cubs for the NL’s second wild card and three games back of St. Louis, the NL Central leader.

Spangenberg, selected 10th overall by San Diego in the 2011 amateur draft, was released by the Padres after the 2018 season. He signed with Milwaukee in Janaury, spent most of the season in the minor leagues and made his first appearance for the Brewers on Aug. 24.

“Playing in the playoffs is all the motivation I need,” Spangenberg said. “This is the first time that I’ve ever had a chance, so I want to do everything I can to get there and be able to experience that.”

“It’s a player who got an opportunity because of injuries, and he has taken advantage of it,” Brewers manager Craig Counsell said. “Now it’s hard to take him out of the lineup.”

San Diego got just two hits and dropped to 68-82, tying the franchise record with its ninth consecutive losing season. The Padres also finished under .500 from 1969-77, the first nine years of the expansion franchise.

Padres starter Garret Richards (0-1) allowed three runs and five hits over 3 2/3 innings in his first major league appearance since Tommy John surgery in July 2018. The 31-year-old right-hander struck out five and walked none, throwing 42 of 61 pitches for strikes.

“A huge step back into making him a big part of what we do in the future here,” Padres manager Andy Green said. “I think we’re encouraged by what we saw today.”

Spangenberg had an RBI single in the second and followed Eric Hosmer’s tying double in the fourth with a triple in the bottom half for a 3-1 lead.

Travis Shaw stopped an 0-for-20 slide with a pinch-hit home run leading off the fifth against Ronald Bolaños, and Orlando Arcia doubled in a run in the sixth.

Zach Davies (10-7) allowed two hits in five innings, Freddy Peralta struck out four over two innings, Alex Claudio pitched a perfect eighth and Jay Jackson struck out the side in the ninth.

Josh Naylor’s second-inning single was San Diego’s only other hit.

“Davies was executing well, not missing much over the plate, really mixing it up good,” Hosmer said. “The guys out of the bullpen did a great job tonight. They were real effective getting strikes early.”

Manny Machado of the Padres was booed loudly before every plate appearance and was cheered when he struck out in the sixth and ninth innings. While playing for the Los Angeles Dodgers against the Brewers during last year’s NL Championship Series, Machado stepped on first baseman Jesús Aguilar’s foot, prompting the benches to empty.

Padres: OF Hunter Renfroe took batting practice, ran the bases and chased fly balls. Out with a sprained his right ankle since Sept. 7th, he is expected to be in Tuesday’s starting lineup.

Brewers: C Manny Piña (concussion) worked out before the game and then the team doctors checked him out.

Padres: RHP Chris Paddack makes his 26th start of the season. He is 2-0 with a 0.49 ERA and 23 strikeouts in his three previous starts.