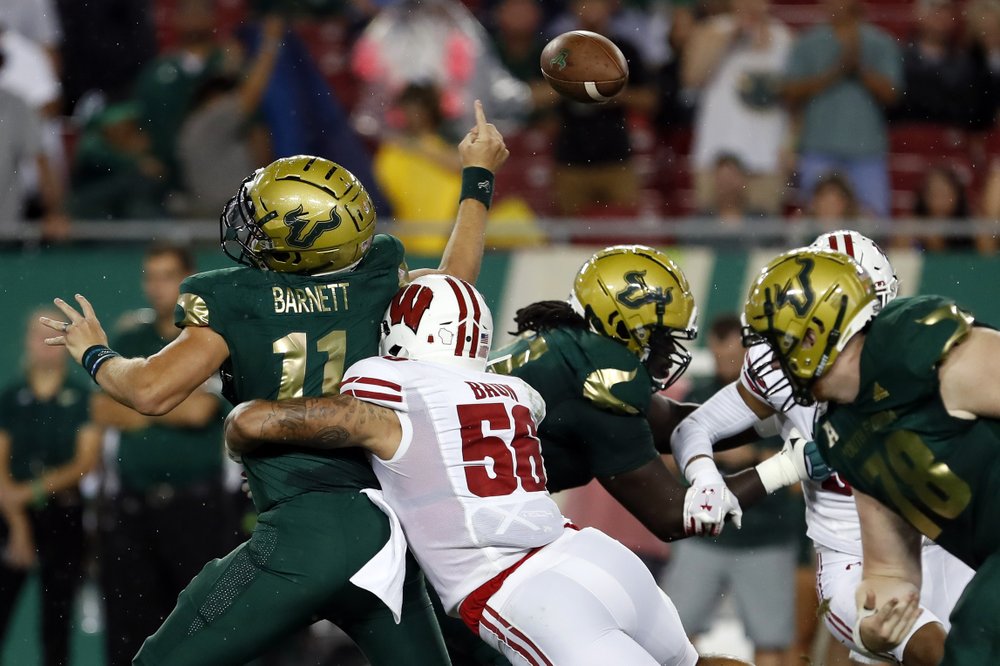 Zack Baun, who had 2½ sacks in 25 career games before this season, is a big reason why.

Responding to a challenge from coach Paul Chryst to improve his pass rush and take on a leadership role, Baun has been impressive thus far, taking the early Big Ten lead with two sacks in two games.

“I’m just trying to make as many as I can, whenever they come,” Baun said. “The pass rush is something that I’ve worked hard at, and to see it come to life like this, you love to see it.”

The start of the season couldn’t have gone much better for Baun and the 13th-ranked Badgers, who outscored South Florida and Central Michigan by a combined 110-0, becoming the first FBS team to score at least 100 points while allowing zero in its first two games since South Carolina in 1980. Wisconsin next faces No. 11 Michigan (2-0), which beat the Badgers 38-13 last season.

“We’re coming for revenge,” Baun said. “Obviously, there is a standard that has been set here at Wisconsin. We all see it on the walls in the tunnel. We understand we didn’t meet that standard last year. We’re coming for it this year.”

After winning at least 10 games in each of Chryst’s first three seasons, the Badgers used last year’s 8-5 campaign as a learning tool — Baun especially.

Baun, a 6-foot-3, 235-pound linebacker, saw his first action in 2016 as a redshirt sophomore, playing sparingly in 12 games. He missed all of 2017 with a broken left foot, and then started all 13 games last season. Baun said he spent a large portion of 2018 working back to full strength, both physically and mentally.

“Last year, it was getting my mental state to 100 percent so they believe in me,” he said. “You’ve got to believe in yourself. I was nervous going into last season. Obviously, it was my first time. My first true role on the team. But as the season played on, I was confident in myself. I knew I could compete.”

Baun, a senior captain, wasn’t always just a linebacker. He was also one of the top quarterbacks in the state while at Brown Deer High School. The leadership qualities he needed then are resurfacing this season.

“I think a lot of guys have appreciated that I stepped up and were expecting me to take that role,” he said. “There are always things to develop to add to my leadership resume.”

So far, so good for the Badgers’ defense, which has allowed 215 total yards and 41 yards rushing, the team’s lowest two-game totals since at least 1998.

Nobody has had a better view of the defense than running back Jonathan Taylor.

“Those guys are fast,” he said. “Those guys, they can move sideline to sideline. But they’re also great in between the tackles and that’s what I feel is so dangerous about this defense. It’s kind of hard to figure out where to attack them, because if you want to try to spread them out, they have no problem. Guys have great speed on them. If you want to try to play big-boy ball, they can do that as well.”

TOP PHOTO: FILE – In this Aug. 30, 2019, file photo, Wisconsin Badgers linebacker Zack Baun (56) hits South Florida Bulls quarterback Blake Barnett (11) as he is delivering a pass during an NCAA football game in Tampa, Fla. Wisconsin’s defense, including senior outside linebacker Zack Baun, has stepped up to the challenge in the first two games, surrendering zero points and leading the Badgers to a 2-0 start. (AP Photo/Mark Lomoglio, File)