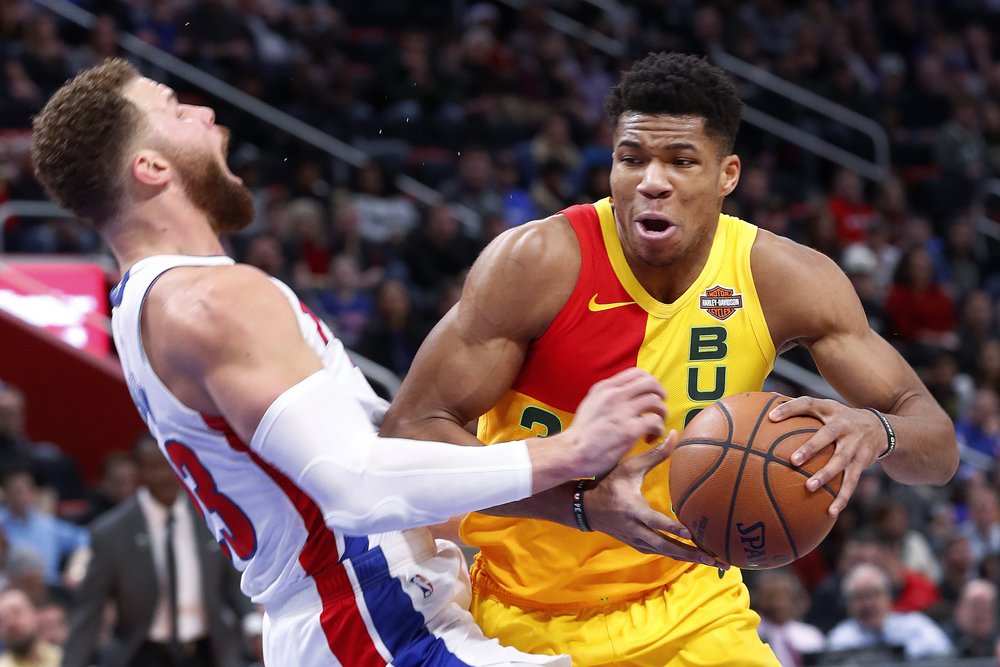 Bucks get Blake, Pistons in first round of NBA playoffs

Bucks get Blake, Pistons in first round of NBA playoffs

Just before Thursday’s regular-season finale, the Milwaukee Bucks found out who they would get in the first round of the NBA playoffs.

In what was basically a formality, the Bucks lost to the Oklahoma City Thunder 127-116, sitting their starters except Khris Middleton, who scored 21 in 17 minutes.

The Bucks haven’t won a playoff series since the 2001 season when the “Big 3” of Sam Cassell, Ray Allen and Glenn “Big Dog” Robinson lost to Allen Iverson’s Philadelphia 76ers in the Eastern Conference Finals.

Since then, the Bucks have lost in the first round eight times, including the past two seasons.

This season, however, should be different.

Oddly enough, the Bucks haven’t played the Pistons since January 29 — since Thon Maker was sent to Detroit in a trade that brought Nikola Mirotic to Milwaukee. In four games against each other, the Bucks have won by an average of 14.8 points — two of those were by 23 points.

Giannis Antetokounmpo’s scoring and rebounding against the Pistons this year was way below his averages.

He was 6.9 points below his 27.7-point average and 3.7 rebounds below his 12.5 average. The rebounds would make sense, with Drummond out there — but Drummond’s numbers (see below) are way off, as well. And, Antetokounmpo did still shoot 58.3 percent from the field and average 7.0 assists.

As for Blake Griffin and Drummond, both started and played 30 or more minutes for the Pistons in all four games against Milwaukee.

The only other real threat on the Pistons is roller coaster-like point guard Reggie Jackson. His splits versus the Bucks look great — 17.5 points on 56.9 percent shooting, along with 4.3 assists, 3.0 rebounds, and just 1.0 turnovers.

The Pistons also traded away their starting shooting guard midseason with basically no replacement.

Ironically, at one point, the Bucks had traded for Detroit small forward Stanley Johnson, but then he ended up being involved in a three-way trade bringing the Pelicans’ Nikola Mirotic to Milwaukee instead — that sent Maker to Detroit, as well.

Malcolm Brogdon only played in two of the four games against the Pistons this season and Mirotic didn’t play in any. Neither will play in this series.

Zaza Pachulia will be back in Milwaukee. The NBA champion averaged 7.0 points, 4.5 rebounds against the Bucks this season.

As for Maker, after requesting the Bucks move him, his change of scenery hasn’t done much.