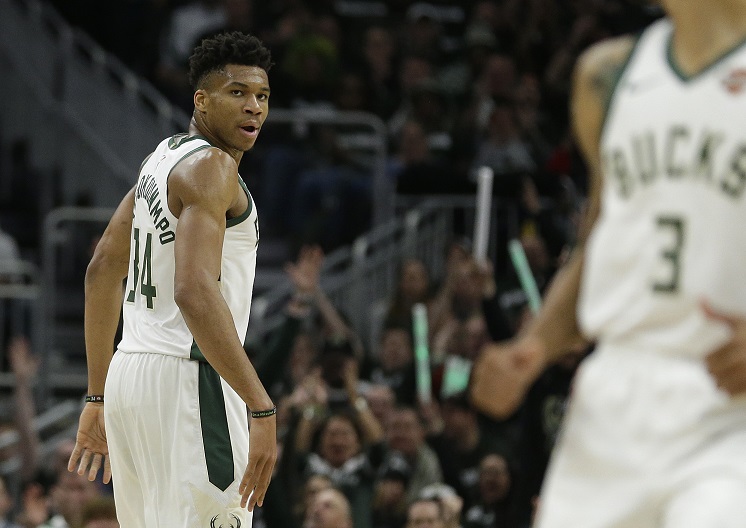 MILWAUKEE (AP) — Giannis Antetokounmpo had 24 points and 17 rebounds in just 24 minutes, and the top-seeded Milwaukee Bucks showed they were serious about making a playoff run with a 121-86 rout of the Detroit Pistons in Game 1 on Sunday night.

The MVP candidate ran and dunked all over the Pistons, who only really caught him when center Andre Drummond shoved him to the ground with both hands late in the third quarter after Antetokounmpo grabbed an offensive rebound with Detroit trailing by 41 points.

Drummond was given a flagrant 2 foul and ejected. He threw a kiss to the Fiserv Forum crowd as he was escorted off the court.

Antetokounmpo struggled at the foul line, making only 5 of 12 attempts, but was 9 for 17 from the field and 1 of 5 from 3-point range.

Luke Kennard paced the Pistons with 21 points off the bench and Drummond had 12 points and 12 rebounds. Reggie Jackson also had 12 points. Detroit played without forward Blake Griffin, who sat out with a left knee injury.

The Bucks rolled to a 27-point lead in the first half, taking a 70-43 margin at halftime. Antetokounmpo had 14 points and 10 rebounds while Lopez added 14 points and Hill contributed 13.

Pistons coach Dwane Casey said his team made a big step forward in qualifying for the playoffs but vowed to fight against the heavily favored Bucks.

“We’re not in the class of where Milwaukee is with their program right now,” Casey said. “They were not two or three years ago.

“I remember coming here a couple years ago (with Toronto) and playing against them. They were getting started, building what they’ve got now. Their patience has paid off. It’s a great experience for us to come in and play against a great team like Milwaukee.”

Detroit: Casey said Griffin was “day-to-day but too sore to go” in Game 1. The Pistons forward averaged 24.5 points, 7.5 rebounds and 5.4 assists in 75 games in his first full season with the Pistons. … Griffin was called for a technical for protesting Drummond’s ejection . Former Bucks forward Thon Maker faced his former team and started in Griffin’s place. He avoided a flagrant foul when he brought Antetokounmpo to the floor in the second quarter. Maker came to Detroit in the three-team trade in February that brought Nikola Mirotic to the Bucks from New Orleans. He had four points and four rebounds in 22 minutes and was booed heavily by the home crowd. “You don’t have to say giddy-up to Thon Maker,” Casey said. “He wakes up in the morning ready to go.” . Former Bucks assistants Sean Sweeney and Tim Grgurich are on the Pistons’ staff. . Detroit entered with a 14-3 playoff record against Milwaukee, winning all four series.

Milwaukee: Mirotic was available and played 15 minutes while scoring four points. “He’s just getting back in conditioning and health and everything like that,” Bucks coach Mike Budenholzer said. Mirotic had missed the last 11 regular-season games after fracturing his left thumb on March 19 against the Los Angeles Lakers. . The Bucks’ 70 points were the second-most in a first half in franchise history. They scored 77 in March 1970. . Budenholzer said he was concerned about the rebounding battle and going against league-leading rebounder Drummond (15.6 per game). “It’s going to take our whole group to make sure we’re taking care of the defensive boards. It’s not the big guys’ job or the center; we have to do it collectively,” Budenholzer said. The Bucks had a 54-46 rebounding advantage.

Game 2 is Wednesday night in Milwaukee.