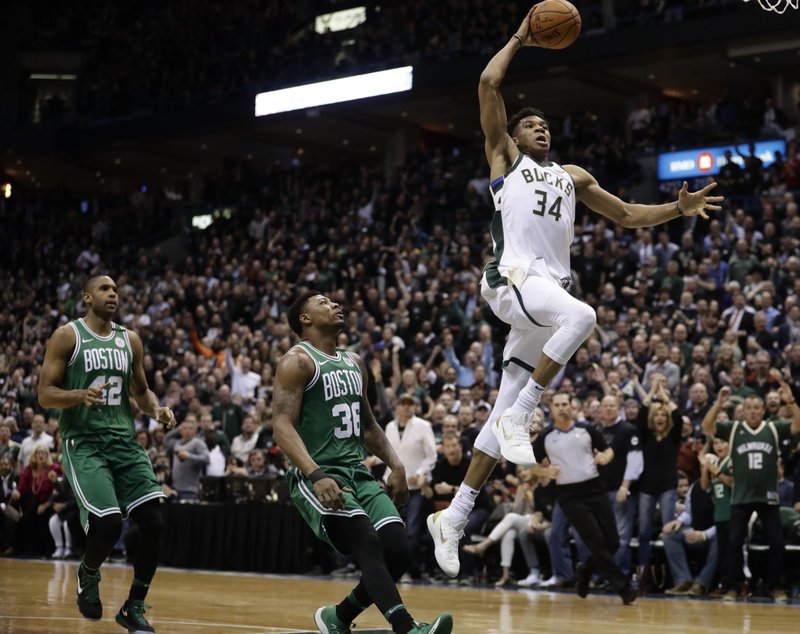 Giannis dominates as Buck, Celtics move on to Game 7

Giannis dominates as Buck, Celtics move on to Game 7

MILWAUKEE (AP) — Giannis Antetokounmpo asserted himself in the biggest game of his budding career with his team on the brink of playoff elimination.

Now it’s on to Game 7 for the Milwaukee Bucks.

Antetokounmpo had 31 points and 14 rebounds and the Bucks pulled away late to beat the Boston Celtics 97-86 on Thursday night to force a winner-take-all game Saturday night in Boston.

He had plenty of company to help keep the Celtics on their heels down the stretch.

Khris Middleton and Malcolm Brogdon each added 16 points, with Brogdon hitting a momentum-swinging 3 from the left corner to give the Bucks a two-possession lead with 5:22 left.

Just getting to Game 7 is a small but significant step for a young team that lost in six games to the Toronto Raptors a year ago. The up-and-coming Bucks haven’t played a seventh game in the playoffs since losing to Atlanta in the first round in 2010.

“This is what you work for. Embrace that moment. Go out as a team, attack it together … find a way to get a win,” coach Joe Prunty said.

The Celtics had their shots to win in it six. They led by nine early, then drew as close as 80-78 with 7:13 left on Marcus Morris’ 3-pointer.

The Bucks made the last big push to close out the Celtics.

Boston had to settle for perimeter looks down the stretch. They couldn’t hit enough 3s, finishing 10 of 36 (28 percent) on the night, and the Bucks limited Boston on the glass.

“We got stagnant and we weren’t very good,” coach Brad Stevens said

At the other end, Antetokounmpo led the Bucks’ charge right at the heart of the Celtics’ defense.

After Eric Bledsoe picked off Jayson Tatum’s inbounds pass, Antetokounmpo converted an offensive rebound with a putback off the glass for an 89-81 lead with 3:08 left. It was part of an 11-3 run late to help the Bucks pull away for 10-point advantage.

With his team facing elimination, Antetokounmpo vowed to be more aggressive following a five-point loss in Game 5.

The two-time All-Star produced in the crunch time, scoring 20 points in the second half on 8-of-14 shooting.

“It’s big. We’ve grown as a team,” Antetokounmpo said. “For us to win Game 6 — we have a big opportunity ahead of us.”

Tatum finished with 22 points, and Terry Rozier had 18 for the Celtics. After holding the edge on the glass for most of the series, Boston got outrebounded 48-39.

“Clearly their speed and length and athleticism affected us,” Stevens said. “They were quicker to the ball all night than us, best probably exemplified by the rebounding numbers.”

Celtics: Stevens stuck with the same starting five he used for Game 5, with Semi Ojeleye in for Aron Baynes for a quicker frontcourt on defense. … Former President Bill Clinton attended the game and exchanged handshakes with guard Marcus Smart. … Jaylen Brown added 14 points on 6-of-15 shooting.

Bucks: C John Henson (back) missed his fourth straight game, with Thon Maker getting his first start of the series over Tyler Zeller. Maker finished with four points and one block. … Held a 25-4 edge on transition points. … Jabari Parker had another strong game off the bench with nine points and 11 rebounds, while Tony Snell had six points.

Veteran forward Al Horford chalks up Game 6 as another valuable learning experience for his young teammates.

No better education than a seventh game in the playoffs on home court.

“It’s going to be new for our group. This whole playoff experience has been new, we have a lot of new pieces,” Horford said. “As a basketball player, fan, one of the places that you want to enjoy and be is the TD Garden for a Game 7.”

He finished with 10 points and 10 rebounds.

“We got great looks this whole series. It’s a matter of knocking it down and trusting the pass. … We need to have that same mentality going into Game 7.” — Middleton.

Game 7 is Saturday night at the TD Garden in Boston.