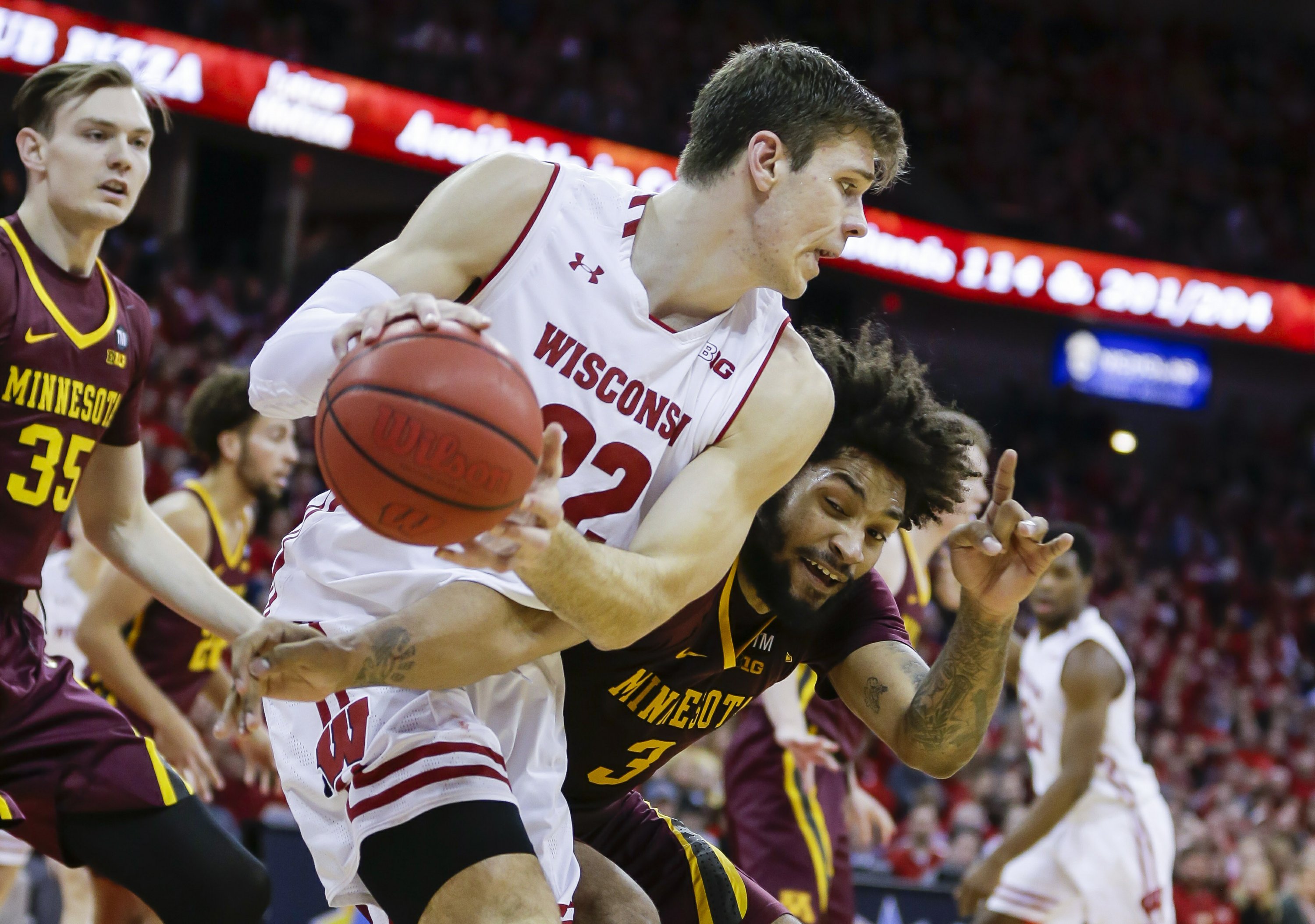 Coffey scores 21 to lead Minnesota past No. 22 Wisconsin

Coffey scores 21 to lead Minnesota past No. 22 Wisconsin

The Badgers weren’t up to the challenge.

Amir Coffey scored 21 points and Minnesota put Wisconsin in an early hole before holding off a furious rally to win 59-52 on Thursday night. The Gophers (12-2, 2-1 Big Ten) ended an eight-game losing streak in the rivalry with their first victory at Wisconsin since 2009.

La Crosse native Kobe King played 15 minutes off the bench. The redshirt freshman was 1-for-3 from the field and 1-for-2 from the line in scoring two points. He also had two rebounds.

Minnesota held the Badgers to 14 percent shooting from 3-point range in the first half while building a double-digit lead. The Gophers then hung on as Wisconsin missed late opportunities at the foul line.

Pitino said a key part of his strategy was double-teaming Wisconsin leading scorer Ethan Happ in the post and then intentionally fouling him late.

Happ led the Badgers with 17 points on 8-of-13 shooting from the field, but he was just 1 for 7 at the line. And the Badgers, who came in shooting 39.1 percent from 3-point territory, second-best in the Big Ten, went only 5 of 22 in this one.

“He’s such a unique, terrific player,” Pitino said of Happ, who came in shooting 52 percent from the foul line. “You have to do something or he’s going to torch you.”

Coffey scored 15 straight Minnesota points in the first half as the Gophers opened a 29-14 lead at the break. He also made a key shot to end the final threat from Wisconsin (10-4, 2-1).

The Badgers still had a chance late even as they failed to convert free throws. That included a stretch of going 3 of 10 in the second half after cutting the deficit to seven with just more than eight minutes to go. Happ started the woes at the foul line by missing the front end on consecutive 1-and-1 situations, and the Badgers finished 7 of 17 after coming in shooting 69 percent as a team.

Happ’s steal and dunk coupled with D’Mitrik Trice’s floater, however, trimmed the margin to 49-47 with two minutes left.

But then Coffey hit a runner and Dupree McBrayer turned steals on back-to-back possessions into points as Minnesota pushed the lead back to eight.

It marked an uncharacteristic lack of discipline with the ball for the Badgers, who entered third in the NCAA with an average of just nine turnovers per game. They also set a season low for points in the first half as they shot only 23 percent from the field over the first 20 minutes.

“There’s not making shots, and there’s what we had in the first half,” coach Greg Gard said. “That’s a whole other level.”

It was the second sports streak Minnesota halted this season against its archrival. The football team snapped a 13-game skid against the Badgers in November, also beating Wisconsin on the road.

Wisconsin guard Brad Davison was called for a technical foul in the first half after he missed a layup while taking heavy contact. No foul was called and he slapped the floor with both hands after hitting the deck. It was Davison’s second foul in the first half, and Coffey converted one of the two ensuing free throws. Gard said he was told Davison slapping the floor was considered an unsportsmanlike gesture, though the coach sounded dubious about the explanation. “I don’t know. I’ll have to do some research to find that one in the rule book,” he said.

Minnesota: Notched its first quality road win of the season.

Wisconsin: Unable to bounce back at home after losing 83-76 to Western Kentucky on the road last week.

La Crosse native Kobe King still may have to sit out a year, as NCAA delays rule change