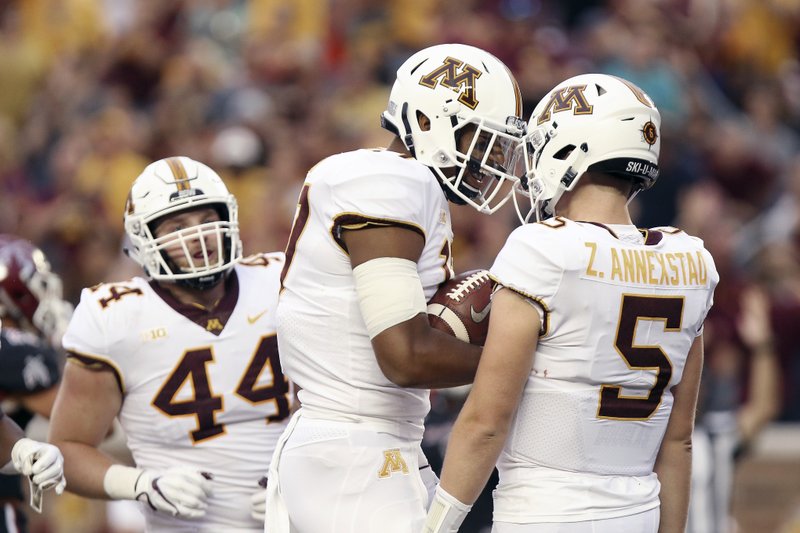 MINNEAPOLIS (AP) — Zack Annexstad was less than one quarter into his debut for Minnesota when he lost a fumble deep in his own territory.

The brief sideline conversation afterward assured coach P.J. Fleck yet again that the true freshman walk-on quarterback has the confidence for the job.

“He puts his hand on my shoulder and says, ’I think we’re going to be all right,’” Fleck said. “Usually it’s me telling people, ‘Hey, you’re going to be OK.’ That’s his personality. It’s different, and I like it.”

Annexstad threw two touchdown passes to Tyler Johnson, and Minnesota opened the season by overwhelming New Mexico State in a 48-10 victory on Thursday.

Antoine Winfield Jr. pitched in the first punt return for a score by the Gophers in five years, a 76-yard zigzag through an Aggies coverage unit that missed six tackles during the play. Winfield, a third-year sophomore safety, had the third of four straight touchdowns for Minnesota in the second quarter.

“He’s one of our best defensive players, but now when you look at him you’re sitting there going, ‘OK, what else could we do with this guy on offense?’” said Fleck, who ordered the punt returner experiment with Winfield in spring practice.

Backup wide receiver Seth Green scored twice on direct snaps inside the 10-yard line, a clever twist from offensive coordinator Kirk Ciarrocca that punctuated a 522-yard performance by the Gophers. Green is also the third-string quarterback.

Seth Green, out of the Wildcat, is going to be fun. pic.twitter.com/g8V8GnYAp3

According to Minnesota’s research, Baker Mayfield was the only other one for Texas Tech in 2013. The last true freshman quarterback to start a season for the Gophers was Tim Salem in 1980. Adam Weber, the program’s all-time leading passer, was a redshirt freshman when he took over the job in 2007.

Annexstad completed 16 of 33 passes for 220 yards and no interceptions, before yielding to backup Tanner Morgan midway through the fourth quarter. After the botched shotgun snap that was recovered by Aggies linebacker Terrill Hanks at the 12-yard line, Matt Romero connected with Izaiah Lottie two plays later for the tying touchdown. Dylan Brown kicked a 45-yard field goal on the next drive to give New Mexico State a short-lived lead, before Annexstad and Smith took the Gophers 75 yards in seven plays on the ensuing possession.

“We got in a groove,” Smith said. “The offensive line picked up a little bit, and I’m proud of those guys up front.”

Romero finished 29 of 58 for 233 yards passing and one interception, a diving catch by linebacker Thomas Barber after one of several mishandled balls by Aggies receivers. Romero, a junior college transfer, made his debut on Saturday during a 29-7 defeat by Wyoming in an unusually early start to the schedule.

“Really, he was sharp tonight,” Aggies coach Doug Martin said. “We had 15 dropped passes, so that’s hard to overcome for any quarterback. He didn’t get much help, but had we caught those balls, I mean, he was looking at a 400-yard passing night.”

New Mexico State: The Aggies capped 2017 with the program’s first bowl game win since 1960, but they’re the only FBS team to start 2018 without its leading passer, rusher, receiver and tackler from the previous season. The Aggies have allowed an astounding 607 rushing yards over their first two games, a sure sign that this will be a rebuilding project in Martin’s sixth season. Their net rushing total on offense, too, is just 29 yards.

Minnesota: Annexstad will face much more daunting defenses this season, but this was exactly the way the Gophers needed their rookie quarterback to start. Demry Croft, who transferred to Tennessee State, totaled 262 passing yards over the final four games last season, and the Gophers didn’t have a touchdown pass over the last five games. Annexstad had two of them before halftime.

“I just went up to him and told him, ‘Keep balling. This is only a start,’” said Johnson, who had five catches for 100 yards.

New Mexico State visits Utah State on Sept. 8, a rematch of the Arizona Bowl game from last season. The Aggies are playing an independent schedule after a four-year appearance in the Sun Belt Conference ended.

Minnesota hosts Fresno State on Sept. 8, a game that ought to give the Gophers a truer nonconference test. The Bulldogs finished 10-4 last season, reaching the Mountain West Conference championship game and beating Houston in the Hawaii Bowl. Fresno State opens with Idaho on Saturday.

NCAA rules D.J. Carton can play for Marquette right away