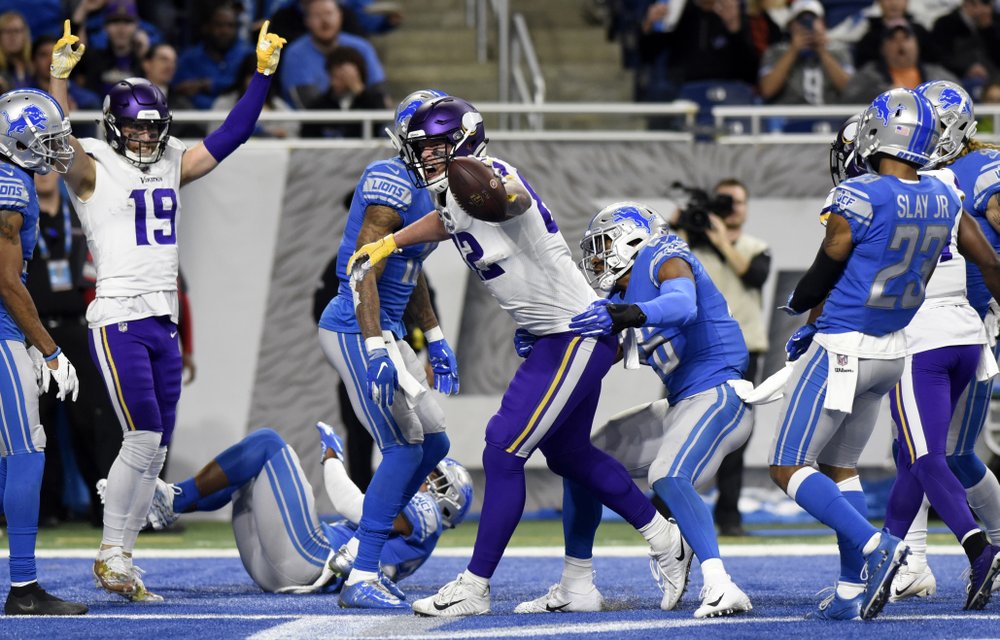 Vikings inch closer to playoff spot with win over Lions

Vikings inch closer to playoff spot with win over Lions

DETROIT (AP) — Kirk Cousins threw a 44-yard Hail Mary to Kyle Rudolph as time expired in the first half to put the Minnesota Vikings ahead and they beat the Detroit Lions 27-9 Sunday, moving a step closer to playing in the postseason.

The Vikings could have clinched a spot in the playoffs with a win and losses by Washington and Philadelphia this weekend. The Redskins lost to Tennessee on Saturday, and shortly after Minnesota walked into its locker room at Ford Field, the Eagles beat Houston on a game-ending field goal.

Minnesota (8-6-1) can still earn a spot in the postseason by closing the regular season with a win against NFC North winner Chicago at home, or by having wild-card hopefuls lose in Week 17.

The Vikings overcame an awful start offensively, scoring two touchdowns on Cousins’ passes over the last 1:32 of the second quarter, and relied on their defense all afternoon against Detroit.

Minnesota had almost as many punts (4) as yards (5) before Cousins led an eight-play, 69-yard drive that ended with an 8-yard touchdown pass to Stefon Diggs late in the first half. On the Vikings’ next possession, Cousins took a shotgun snap with 2 seconds left in the second quarter, rolled slightly to his right, stepped up and threw against a three-man rush. Rudolph leaped to catch easily in the end zone without much traffic in front of him.

In the same end zone three years ago, Aaron Rodgers connected with Richard Rodgers on a winning desperation pass to lift the Packers to a win over Detroit to help them make a push to get into the postseason.

Minnesota seems to have a knack for desperation plays. The Vikings beat New Orleans in the playoffs last January on Diggs’ game-ending, 61-yard touchdown reception to advance to the NFC championship game.

Cousins finished 21 of 28 for 253 yards with three touchdowns, matching his career high with 29. Rudolph had a career-high 122 yards receiving, matched a career high with two touchdown receptions, and had a season-high nine receptions. Dalvin Cook ran for 73 yards on 16 carries for the Vikings.

The Lions (5-10) wasted opportunities to have a comfortable cushion in the first half because their offense stalled repeatedly. They had to settle for three field goals and a 9-0 lead.

Detroit has dropped four of five and seven of nine since reaching .500 in late October.

The playing-for-pride Lions got off to a strong start defensively against the playoff-hopeful Vikings, holding them without a first down until there were three-plus minutes left in the first half.

With the ball, though, Detroit could not to take advantage of favorable field position against a stingy defense. The Lions were relegated to Matt Prater kicking one field goal in the first quarter and two in the second.

The Vikings opened the second half with a field goal for a 17-9 lead that looked like it would be enough against a team that failed to score a touchdown against them in two games this season. Minnesota sent a lot of fans out of Ford Field early in the second half when Cousins threw a 4-yard touchdown pass to Rudolph to go ahead by 15 points.

Matthew Stafford was 18 of 32 for 116 yards and was replaced with 4:10 left by Matt Cassel, who was welcomed by cheers before the Lions were called for a false start prior to his first snap. Kenny Golladay, one of the only bright spots for Detroit this season, had six receptions for 58 yards.

Vikings: CB Marcus Sherels left with a foot injury in the first quarter and didn’t return. CB Xavier Rhodes (groin) limped off the field in the fourth quarter. FB C.J. Ham (elbow) had an elbow injury.

Lions: Close the season at Green Bay on Sunday.

Vikings face abrupt finish, roster churn after all that fun

Bears get No. 1 pick after Texans rally for win at Indy