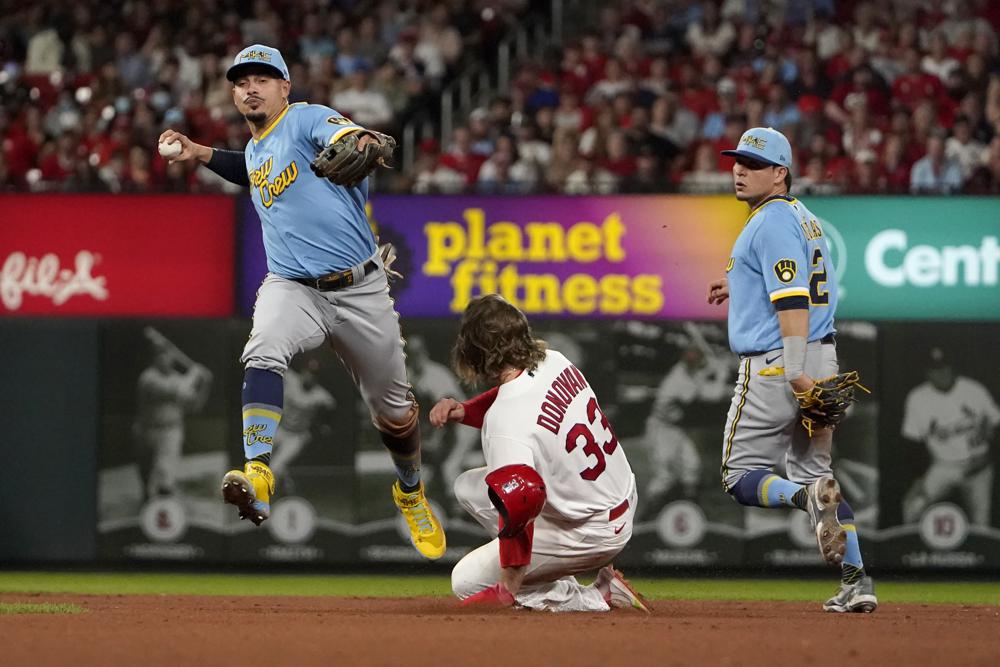 MILWAUKEE (AP) — Brewers shortstop Willy Adames attended the World Series as a spectator last season but couldn’t help but wonder what might have been.

Milwaukee went 86-76 last year, ending a string of four straight playoff appearances. In the race for the National League’s final wild-card berth, the Brewers finished one game behind the Philadelphia Phillies, who ended up winning the pennant before losing the World Series to the Houston Astros.

“That could’ve been us, but it wasn’t,” Adames said Wednesday. “So now that motivates us to be a better team this year and win it all.”

Adames was among a half-dozen Milwaukee players to join manager Craig Counsell and president of baseball operations Matt Arnold at the Brewers’ “Hot Stove & Cold Brews” gathering Wednesday night. The event enabled the team to interact with fans at Dugout 54, a sports bar near American Family Field.

The list of players participating also included right-handed pitcher Freddy Peralta, who said he’s feeling better after a shoulder issue limited him to 17 starts last season. Peralta was selected to the All-Star Game in 2021, when he went 10-5 with a 2.81 ERA.

Milwaukee entered last season with 2021 NL Cy Young Award winner Corbin Burnes anchoring a rotation that also included 2021 All-Star Brandon Woodruff, Peralta, Adrian Houser and Eric Lauer. But all those pitchers other than Burnes spent time on the injured list, and the Brewers didn’t have quality alternatives to step in when starters got hurt.

Milwaukee went 13-22 in games that weren’t started by any of those five pitchers.

“One of the things last year that we struggled with I think toward the end of the season was the fact that we didn’t have the depth that we’ve needed in our rotation,” Arnold said. “So we’ve tried to fortify that this offseason.”

The Brewers signed left-hander Wade Miley – a member of Milwaukee’s 2018 team that reached Game 7 of the NL Championship Series – and acquired right-hander Bryse Wilson from the Pittsburgh Pirates. Burnes, Woodruff, Peralta, Lauer, Houser and Aaron Ashby also are back after each of them started at least 17 games last season.

“You go into every season the same way, knowing that five isn’t enough,” Counsell said. “It’s clean to write five guys down and think you’re going to use those five guys for 162 games, but every team knows that’s not realistic. What’s next after those five is very important, and they’re going to have a very big role, start a lot of games. You want to make that group as strong as you possibly can. And there’s a carryover effect to the bullpen from that group as well.”

“Got a report today from our guys that said he’s doing awesome,” Arnold said. “He’s at our complex right now and he’s working out and feels great.”

Arnold was promoted from general manager after forrmer president of baseball operations David Stearns stepped down in late October to take an advisory role within the organization. Stearns joined the Brewers in October 2015 as general manager and built the roster that helped turn Milwaukee into an annual playoff contender.

Counsell expressed optimism that trend will continue under Arnold, who also joined the Brewers’ front office in 2015.