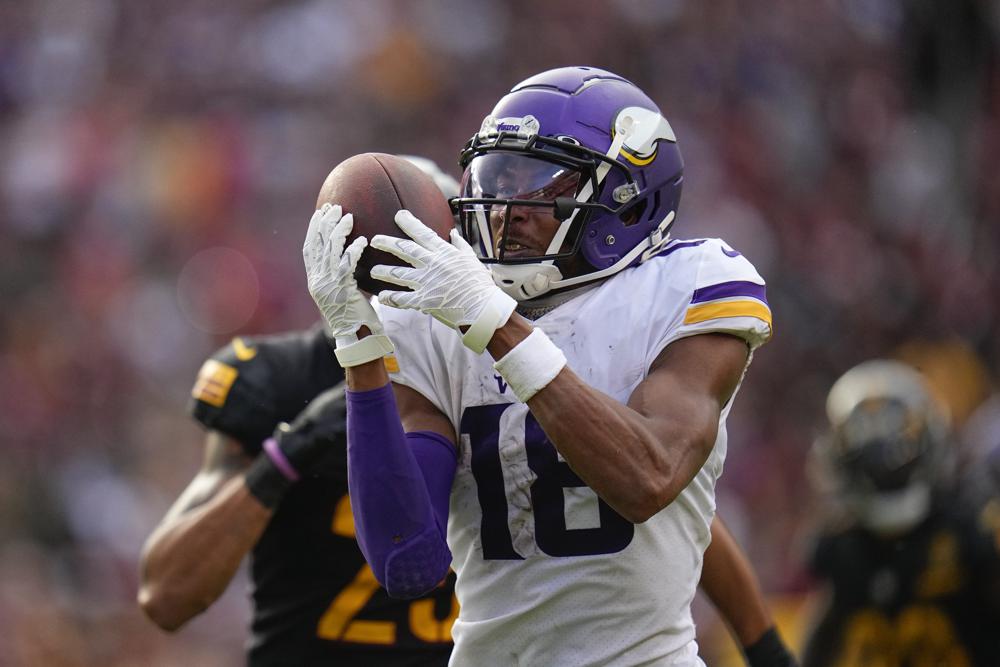 Cousins-Jefferson connection strong for Vikes with Jets next

Cousins-Jefferson connection strong for Vikes with Jets next

MINNEAPOLIS (AP) — The long pass from Kirk Cousins up the left sideline landed in Justin Jefferson’s arms in just the right spot in the fourth quarter of Minnesota’s game with New England, a split second before two Patriots defensive backs slammed into the Vikings star.

Jefferson kept the ball secure for a 36-yard reception as he hit the turf, before springing to his feet, flexing his muscles in celebration and screaming to the roaring crowd. The Vikings scored the go-ahead touchdown on the next play, after yet another contested catch by the indefatigable Jefferson.

“I love this team. I’d do anything for it, and when that ball’s in the air, it’s mine,” Jefferson said.

Already owning more receiving yards than any other third-year player in NFL history with six games left to pad his total, Jefferson has gained the trust of Cousins many times over. The quarterback has ever-growing confidence he can pinpoint a pass into a tricky spot and Jefferson will haul it in.

“The eye in the sky don’t lie, we say,” Cousins said. “When he puts that stuff on tape, it earns the right to keep getting the ball.”

Jefferson said he’s worked on hand-eye coordination, grip strength and peripheral vision to aid his success rate on those well-covered routes. The challenge won’t subside this week when the Vikings play the New York Jets, who boast a pair of standout cornerbacks: Sauce Gardner and D.J. Reed.

“I’m confident in my game, my skill set to win my battles, and hopefully we don’t get too many double teams,” Jefferson said.

The Vikings (9-2) can clinch their first NFC North title in five seasons with Cousins by beating the Jets and having Jacksonville win at Detroit (4-7), but they’ve largely kept their feelings about their dominance in the division to themselves with the obvious bigger picture of seeding for the NFC playoffs in the background.

“I never think about future weeks, or really can’t afford to look in the rearview mirror either. It’s got to be all about this week and getting a win,” Cousins said, adding: “There are many teams who at this stage of the game are hovering around .500, and then they end up playing for the Super Bowl, so you understand how this league will beat you up and go back and forth.”

The Jets (7-4) are one game out of the AFC East lead, in an even more foreign place with meaningful games ahead in December. They haven’t been to the playoffs in 12 years.

Mike White stepped in for the Jets at quarterback for the benched Zach Wilson last week and performed with the poise and efficiency of a veteran in just his fourth career start — and first of the season. White went 22 of 28 for 315 yards and three touchdowns in the 31-10 victory over Chicago.

White already has just one fewer TD pass than Wilson and is two behind Joe Flacco for the team lead.

Kene Nwangwu returned a kickoff 97 yards for the tying touchdown for the Vikings in the third quarter against the Patriots, his first score of the season after taking two of them all the way as a rookie last year. Special teams coordinator Matt Daniels blamed himself for holding Nwangwu back by overthinking the return schemes. He and assistant Ben Kotwica drew up a new plan on paper at halftime of that game that the Vikings had never practiced before.

“What a breath of fresh air it was to see him take one to the house,” Daniels said. “I know we’ve all been waiting on it.”

The Vikings ought to get a boost for their defensive line with the return of Dalvin Tomlinson, who has missed the last four games with a calf injury. The only previous game he missed in six years in the NFL came last year when he was sidelined by COVID-19.

Tomlinson, whose interior presence and push has contributed to edge rushers Za’Darius Smith and Danielle Hunter combining for 16 1/2 sacks, warmed up before the New England game but was held out as a precaution.

“It was more just about trusting things, making sure the muscles were ready for the pounding you’re going to take during the game,” Tomlinson said.

Jets wide receiver Elijah Moore, who requested a trade earlier this season because of a lack of opportunities, has been more involved in the passing attack lately. With White at quarterback, Moore caught his first touchdown pass of the season against the Bears after having five as a rookie last year.

Moore said this week he actually took a ball the day before the game and had a monologue with it — even giving it a kiss for good measure.

“I was like, ‘Damn, you already know how I feel about you,’” Moore said.

0
0   0
previous EXPLAINER: How will College Football Playoff expansion to 12 teams beginning in 2024 work?
next Packers defense hasn’t come close to meeting expectations, as Chicago QB Fields is back
Related Posts