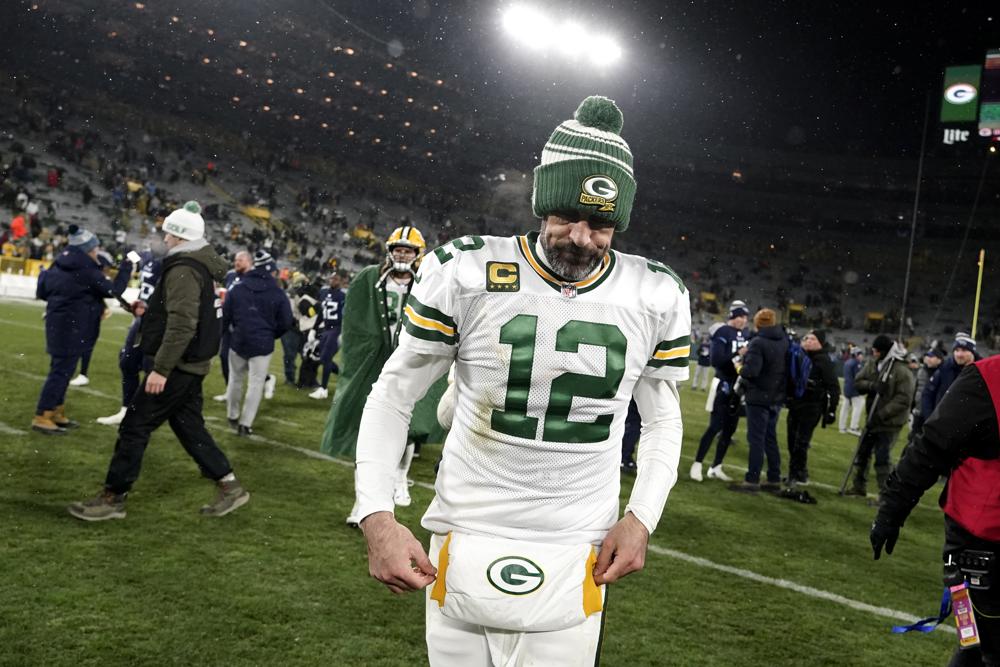 GREEN BAY, Wis. (AP) — Aaron Rodgers said he’d have an open mind if the Green Bay Packers get eliminated from playoff contention and team officials approach him about resting to allow more game reps for his backup, Jordan Love.

He’s just hoping the Packers (4-8) make it a moot point by winning out.

“I’d love to finish the season out, but I understand this is a business and there’s a lot of us kind of older guys who play a decent amount and they might want to see some younger guys play,” the four-time MVP said Wednesday. “Hopefully we don’t have to have that conversation. But if that conversation comes up, I’ll approach that with an open mind and without any bitterness or resentment.”

Rodgers has played through a broken right thumb for Green Bay’s last seven games and left the Packers’ 40-33 loss at Philadelphia on Sunday with injured ribs. Rodgers, who turns 39 on Friday, has said he wants to keep playing as long as he’s able and the Packers remain in playoff contention.

Rodgers also says he’s healthy enough to play Sunday when the Packers visit Chicago (3-9), although he might need to wear protective gear for his ribs. The Packers have beaten the Bears seven straight times. Rodgers has completed 76.1% of his passes for 16 touchdowns with no interceptions in his last five meetings with the Bears.

Rodgers wouldn’t specify whether any of his ribs were broken.

“I’ve done a lot of rehab the last few days, got some stuff I do at the house as well,” Rodgers said. “Always on my herbs and my teas and all the other things that help make me feel better. So, not surprised I’m feeling better, just happy I avoided a major injury.”

Rodgers didn’t practice Wednesday, but that’s been his usual routine since breaking the thumb on the final play of a 27-22 loss to the New York Giants on Oct. 9.

The Packers still have faint postseason hopes, though they probably would have to win their last five games and get plenty of help.

“Obviously, like I said, I want to win out and we don’t have to have those conversations,” Rodgers said. “I understand if we don’t that’s a possibility to have that conversation.”

The Packers could benefit in the long run from getting an extended look at Love, their 2020 first-round pick whose only career start came last season in a 13-7 loss at Kansas City when a positive COVID-19 test sidelined Rodgers.

Love filled in for the injured Rodgers at Philadelphia and delivered his best performance thus far, going 6 of 9 for 113 yards with a 63-yard touchdown pass to Christian Watson.

Rodgers is on pace to have his worst passer rating since 2015 after leading the NFL in that category each of the last two seasons. He has been picked off nine times, his highest interception total since 2010 and four off his career high.

The thumb injury has hindered him and he’s been throwing to an inexperienced group of receivers. The Packers’ most promising pass-catchers, Watson and Romeo Doubs, have rarely been healthy at the same time. That could be changing soon, as Doubs returned to practice on a limited basis Wednesday after missing Green Bay’s last three games with an ankle injury.

The eventual return of Doubs to team up with Watson, who has six touchdown catches in his last three games, could help boost the passing attack as Green Bay attempts a late surge. Rodgers says he can tell his team is still focused on turning things around.

“I’ve been a part of a few bad teams over the years and things kind of become (a group of) independent contractors,” Rodgers said. “Guys kind of punch a time card and get out. And I haven’t felt that way this year.”

0
0   0
previous Allen, Bucks hang on after Giannis fouls out to edge Knicks
next Antetokounmpo and the Bucks face the Lakers
Related Posts