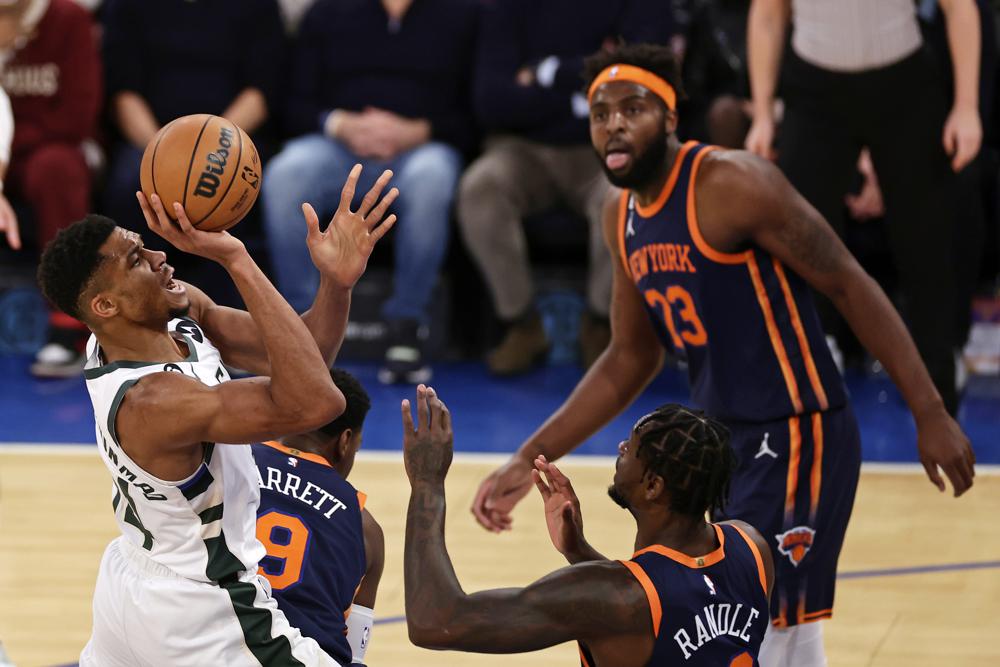 Allen, Bucks hang on after Giannis fouls out to edge Knicks

Allen, Bucks hang on after Giannis fouls out to edge Knicks

NEW YORK (AP) — Giannis Antetokounmpo had 37 points, 13 rebounds and seven assists, then Grayson Allen made the tiebreaking 3-pointer with 30 seconds left after his superstar teammate fouled out to lead the Milwaukee Bucks to a 109-103 victory over the New York Knicks on Wednesday night.

Allen made only one 3-pointer — a game after going 7 for 7 behind the arc in the first half of a victory over Dallas. But it was the only one the Bucks needed after Antetokounmpo had carried them for so long.

He fouled out with a minute left and the Bucks leading by two when he tried to block Mitchell Robinson’s shot. The Bucks challenged the call, hoping Brook Lopez got the ball cleanly, but replays showed Antetokounmpo hit Robinson’s arm first.

“That makes things a little bit more difficult for us. He’s the head of our team,” Allen said. “But I think we all think we’re capable of winning with whatever five we’ve got out there.”

Robinson made one free throw and the Knicks got the rebound when he missed the second, leading to a free throw by Jalen Brunson that tied it with 47 seconds remaining.

After Allen’s 3-pointer, RJ Barrett missed a 3 for the Knicks and the Bucks closed it out from the free throw line.

Jrue Holiday had 22 points, six rebounds and five assists for the Bucks, who had long stretches where Antetokounmpo was their only offense.

“He’ll find a way to get through and find his spots and be the aggressor,” Bucks coach Mike Budenholzer said. “So we needed all of it and then his teammates were able to bring him home after he was out.”

Barrett scored 26 points, Julius Randle added 18 and Brunson had 17 for the Knicks, who piled up 140 points in Detroit on Tuesday night but found things a whole lot different against the Bucks’ top-notch defense. New York shot 42% from the field and 20% from 3-point range, plus a dismal 65% from the free throw line.

“I thought we got some good shots we didn’t make,” Knicks coach Tom Thibodeau said. “But I liked the way we competed. I thought we did a lot of good things.”

Robinson finished with 15 points and 20 rebounds, including 11 offensive.

After a sloppy-shooting first half, when the teams combined to go 8 for 39 from 3-point range, Antetokounmpo provided some prettier play in the third quarter. The reigning Eastern Conference player of the week was 4 for 5 for nine points, including one layup where it appeared he’d driven too far under the basket on the right side after a spin move but was able to reach far enough to scoop it in from the left of the rim.

Bucks: The game began a stretch that has the Bucks playing on the road 11 times in a 15-game span. … Milwaukee beat New York for the fifth straight time. … Allen had 11 points.

Knicks: Brunson came up limping after the first possession of the game and soon after checked out and went back to the locker room. When he returned about six minutes later, the public address announcer accidentally called him “Rick” Brunson, Jalen’s father who played for the Knicks and is now an assistant to Thibodeau. … The Knicks have lost four straight home games.

Budenholzer said Khris Middleton worked out again Wednesday after the Bucks’ shootaround as he nears his return from offseason left wrist ligament surgery. The Athletic reported Wednesday that Middleton could make his debut as soon as Friday against the Lakers, but Budenholzer didn’t give any timetable.

“I think to say he’s close is accurate and I’ll just leave it at that,” Budenholzer said. “Close can mean anything.”