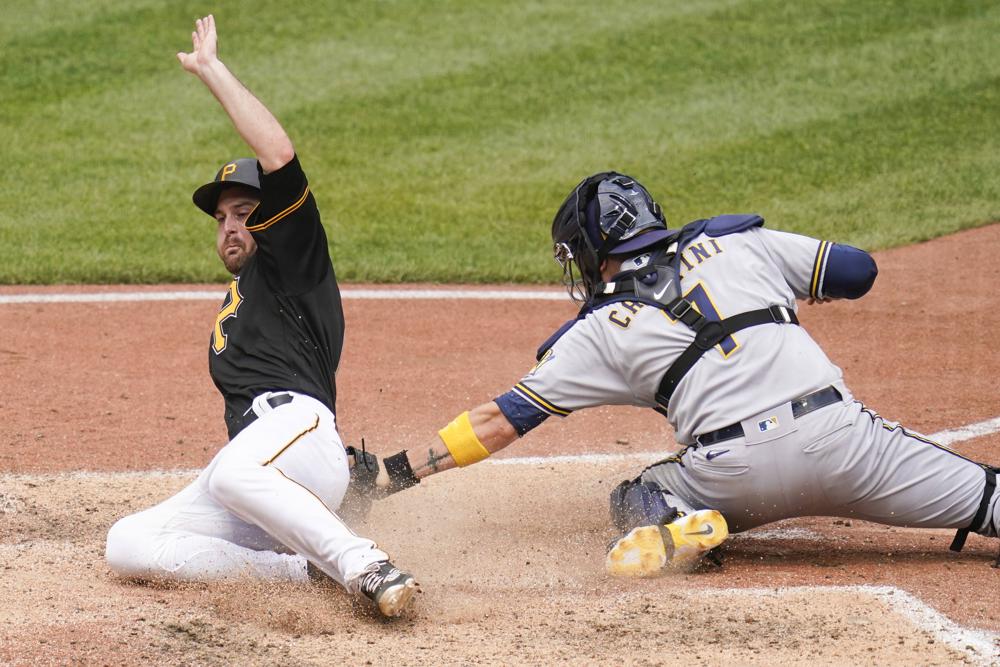 PITTSBURGH (AP) — The Milwaukee Brewers insist they’re not suffering from sort of a Josh Hader hangover.

Bryan Reynolds raced home on a wild pitch with one out in the 10th inning, lifting the Pittsburgh Pirates to a 5-4 victory on Thursday to complete a three-game sweep of Milwaukee.

Reynolds led off the bottom of the 10th by tying the game with a ground-rule double to right field that scored rookie Tucupita Maracano. Reynolds advanced to third on a fly ball to right by Ke’Bryan Hayes and scored when a 0-2 curveball by Milwaukee reliever Matt Bush (2-2) skipped by catcher Victor Caratini.

“I’m trying to bury it but obviously not that much,” Bush said. “It just got away from me a little bit.”

The Brewers fell to 0-3 since trading Hader, their four-time All-Star closer, to San Diego on Monday. Milwaukee failed to hold on to multiple-run leads in all three games at PNC Park, though starter Brandon Woodruff downplayed the idea that Hader’s departure played a role in getting swept at PNC Park for the first time in two years.

“When you come to the baseball field, regardless of who is in this room, this is our team and we’ve got a dang good team,” Woodruff said. “We’re here for each other, we’re going to play for each other and we can’t do anything about (who is in the room and who is not) other than going out and doing our job.”

Milwaukee took the lead in the top of the 10th when Duane Underwood Jr. (1-3) hit Kolten Wong with the bases loaded and two outs.

Leftfielder Ben Gamel then made a diving grab on a sinking liner by Hunter Renfroe to escape further damage, and the Pirates responded in the bottom of the inning behind Reynolds, who hit a walk-off home run leading off the bottom of the ninth in an 8-7 win on Wednesday.

“It says a lot about this team and how close we are to really (being contenders),” said Pittsburgh first baseman Michael Chavis. “We’ve got some impactful players. You catch us on the right day and things are going to kind of fall into place.”

Reynolds, Gamel, Maracano and catcher Jason Delay had two hits each for Pittsburgh. The victory snapped a six-game losing streak in extra-inning contests by the Pirates. Pittsburgh has won three straight following a seven-game slide that briefly dropped the club into last in the NL Central.

“I don’t think we’ve swept them since I’ve been up,” said Pirates third baseman Ke’Bryan Hayes, who made his major league debut in September 2020. “We’re headed in the right direction.”

Pittsburgh trailed 3-1 in the seventh but pulled even behind RBI singles by Maracano and Gamel, the last coming against reliever Brad Boxberger that allowed Delay to score after Boxberger came on with two on and one out in the seventh. While the run wasn’t charged to Boxberger, it symbolized how Milwaukee’s bullpen struggled during the series. Brewers relievers were charged with nine runs over the course of three games.

Mike Brousseau hit a two-run home run for Milwaukee and Caratini added his seventh, but the Pirates also scored a pair of runs on wild pitches, including the winner.

The Brewers played the final 3 1/2 innings without star Christian Yelich and manager Craig Counsell. Both were ejected in the bottom of the seventh for arguing balls and strikes with home-plate umpire Jerry Meals after Yelich struck out looking to end the top of the inning.

The Brewers loaded the bases with one out in the ninth, but Hayes ended the threat by making a spinning backhand stab on a sharp grounder by pinch-hitter Tyrone Taylor. Hayes stood up, touched third, and then fired a throw to first that beat Taylor by a step.

Hayes said he shuffled toward the third-base line before the pitch, expecting Taylor to pull the ball. When Taylor ripped one down the line, Hayes was right there.

“I was able to get to it and then get a glove on it,” Hayes said. “It was kind of between the lip (of the grass) and the dirt. Luckily, it didn’t hop up on me too much. I was able to knock it down and make the play.”

Brewers: Placed C Omar Narváez on the 10-day injured list with a left quad strain. Narváez tweaked the muscle while rounding third base on a hit by Willy Adames on Wednesday. Recalled C Mario Feliciano from Triple-A Nashville to fill in during Narváez’s absence.

Brewers: Begin a five-game homestand on Friday night when they open a three-game set against Cincinnati. Eric Lauer (7-3, 3.75 ERA) will face Robert Dugger (0-0, 4.50) in the opener.

Pirates: Start a 10-day, three-city road trip on Friday when they visit Baltimore.

0
0   0
previous Packers’ rookie review: Doubs stands out while Watson waits
next Bob Uecker on call, as Brewers head into matchup with the Reds on losing streak
Related Posts