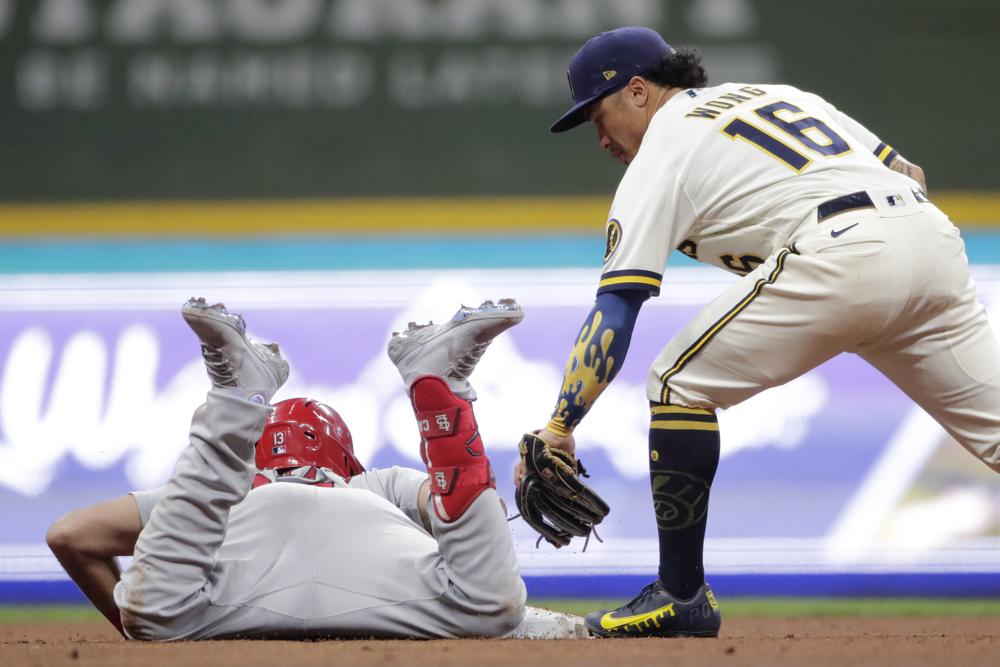 Bob Uecker on the call as the Brewers look to even the series Tuesday against the Cardinals.
Pregame on WKTY begins at 6:05 p.m. Tune in on 96.7 FM / 580 AM

The Cardinals have won nine straight for the first time since 2004 to solidify their grip on the second NL wild card. They remained three games ahead of Cincinnati for the final postseason spot, with San Diego four games back and Philadelphia 4 1/2 games behind.

The longest winning streak in franchise history is 14 games, set in 1935.

Milwaukee’s magic number over the Cardinals to clinch the division title remained at three.

“It’s a nice round number and it looks better than 199,” Lester said. “It’s obviously awesome, but I’m kind of lacking words.”

Cardinals manager Mike Shildt had plenty to say about Lester, whom the Cardinals acquired from Washington at the trade deadline.

“What a tremendous addition. He’s done a great job,” Shildt said. “This guy’s got such heart. He’s like John Wayne. He’s got that true grit. Big, strong silent type. That’s a heck of a milestone.”

St. Louis got on the board in the first on Arenado’s homer, his 33rd of the season, off Freddy Peralta (9-5).

“It’s extremely important to get out to a lead especially against these arms and these teams that we’re facing that are good,” Arenado said. “But at the end of the day, we are just playing solid baseball regardless of whether we are scoring early or not.”

Milwaukee clawed right back in the second. Avisaíl García , who returned to the starting lineup after missing four games with lower back spasms, led off with a homer off Lester. Luis Urias followed two batters later with a solo shot of his own to tie it.

Lester retired 10 straight until giving up a single to Jackie Bradley Jr. with two outs in the fifth. Lester surrendered three runs and seven hits in six innings. He struck out two and didn’t walk a batter in an efficient, 77-pitch outing.

Lester has worked five innings or more in 19 of 26 starts this year, including nine of 10 since joining St. Louis at the trade deadline.

Cardinals’ relievers Kodi Whitley, T.J. McFarland and Luis García held the Brewers scoreless over the final three innings. García got his first save of the season.

“We hit a bunch of lazy fly balls,” Brewers manager Craig Counsell said. “We didn’t put enough pressure on Lester or the bullpen. It was just a quiet night.”

Peralta retired 11 of 12 until allowing the first two batters to reach in the sixth. The Cardinals took a 3-2 lead on Yadier Molina’s run-scoring single.

Peralta gave up seven hits and three runs in six innings. He struck out nine and walked one.

St. Louis tacked on a run in the seventh when Matt Carpenter, batting for Lester, hit a leadoff double and scored on Paul Goldschmidt’s sacrifice fly. Molina drove in another run in the eighth to extend the lead to 5-2.

Cardinals: OF Tyler O’Neill appear to be in considerable pain after fouling a ball off his left shin in the sixth. He remained in the game after a visit from the trainer.

Brewers: Reinstated SS Willy Adames (left quadriceps strain) from the 10-day injured list and optioned INF/OF Tim Lopes to Triple-A Nashville. “He’s been annoying for a couple days, in a nice way,” manager Craig Counsell said of Adames. “He’s been ready to play. You can kind of sense that.” … OF Lorenzo Cain remained out of the starting lineup as he continues to deal with soreness from crashing into an outfield wall on Saturday. “It’s not as bad as we thought,” Counsell said. … Bradley started in place of Cain but is dealing with plantar fasciitis. … LHP Brent Suter had a stomach bug that recently limited his availability, according to Counsell.

The Cardinals designated right-handed pitcher Daniel Ponce de Leon for assignment and recalled lefty Brandon Waddell from Triple-A Memphis. Ponce de Leon, who was 1-1 with a 6.24 ERA in 24 appearances for St. Louis this season, has spent eight seasons with the organization. While pitching for Memphis in 2017 in a game against the Iowa Cubs, Ponce de Leon was hit in the side of the head by a line drive off the bat of Cubs’ catcher Victor Caratini. He was rushed to a nearby hospital where he underwent a four-hour emergency brain surgery.

“Really tough decision,” Shildt said. “I have a lot of respect for him. He went through a tremendous ordeal that was not only career-threatening but life-threatening. That he would overcome it is to his credit. He persevered. It just came down to a decision that the organization felt is best at the time. It was a tough conversation. He handled it like a pro. We shook hands and hugged, and I wished him all the best.”

RHP Jake Woodford (2-3, 4.30 ERA) will take the mound for the Cardinals in the second game of the series while RHP Brandon Woodruff (9-9, 2.55) goes for the Brewers. Woodford will be making his second career start against Milwaukee. Woodruff is 3-2 with a 3.32 ERA in eight career games (six starts) vs. St. Louis.

TOP PHOTO: St. Louis Cardinals’ Matt Carpenter, left, slides safely into second base for a double past the tag of Milwaukee Brewers’ Kolten Wong (16) during the seventh inning of a baseball game Monday, Sept. 20, 2021, in Milwaukee. (AP Photo/Aaron Gash)