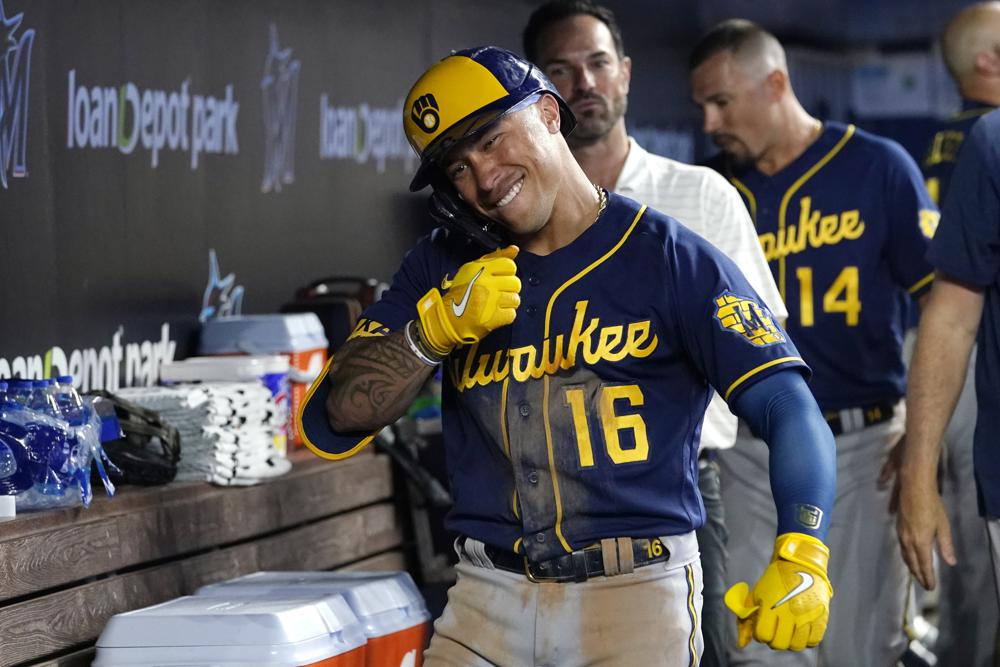 Wong leads Brewers to 7-3 win over the Marlins

Wong leads Brewers to 7-3 win over the Marlins

Bob Uecker back on the mic, as the Brewers are back in Milwaukee today facing the World Series champs. Pregame on WKTY begins at 6:05 p.m. for Brewers-Braves. Tune in on 96.7 FM / 580 AM

Playing in his 1,000th major league game, Wong also stole two bases for the Brewers, who finished 4-5 on their nine game road trip.

“Super humbling,” the 31-year-old Wong said of his achievement. “Where I grew up, to see where I have come, if you had asked me that, I would have told you you’re crazy. The ability to be playing this long, I just can’t thank anybody but God in this situation.”

Jace Peterson and Rowdy Tellez also homered to back Brandon Woodruff, who limited Miami to three runs and five hits in his five-inning outing. Woodruff (4-2) walked two and struck out six.

Aaron Ashby relieved Woodruff and pitched four hitless innings while striking out eight for his first save.

“When Jace did that, it lit a spark in everybody,” Wong said.

Woodruff capitalized on the Brewers’ outburst by shutting down the Marlins in the fifth.

“I told myself I’m not giving this lead back up,” Woodruff said. “I was able to go out and put a zero.”

Hernández (2-3) allowed five runs, two of which were earned, and three hits. The right-hander walked three, struck out two and hit a batter. He has surrendered 10 home runs in his seven starts this season.

“I made a couple of mistakes and paid the price,” Hernández said. “I just have to stay positive and not let those thoughts win the battle. I think I’m going to do well at some point so it’s just a matter of continuing to work hard.”

Tellez made it 6-3, connecting with a solo shot off reliever Tommy Nance in the seventh for his eighth homer.

“It was uneven but it was a nice way to finish it,” Milwaukee manager Craig Counsell said of his club concluding the long trip with a win. “We have two more trips like this. The third city, you’re kind of grinding through that third city. We came out and did a nice job today.”

Brewers third baseman Willy Adames exited with a left ankle sprain in the bottom of the second. Adames made a successful hard slide at home off Luis Urías’ sacrifice fly that gave Milwaukee a 1-0 lead in the first. Once Adames reached his feet, he limped toward the dugout. Adames played through the top half of the second before being replaced by Mike Rosseau.

Adames, whose nine homers tie Hunter Renfroe for the team lead, will be re-evaluated Monday.

Payton Henry’s two-run single in the second put Miami ahead 2-1 and Jorge Soler padded the lead with a solo homer in the third.

Brian Anderson was one of Ashby’s strikeout victims but became the only batter to reach against him in the eighth. He swung and missed at Ashby’s slider for the third strike as the pitch skipped past catcher Narváez. Although Narváez retrieved the ball in time to throw Anderson out at first, the ball got lodged under the backstop padding, resulting in a dead play.

“It’s a rule, if the ball gets lodges it’s a dead ball,” Counsell said. “There’s logic to it when it’s a batted ball, thrown ball. When it’s a pitch strike three, it’s a little harder to define.”

The Marlins recalled 1B Lewin Díaz from Triple-A Jacksonville. Díaz, the Marlins’ 2021 Triple-A Player of the Year, has six homers and 30 RBIs in 32 games with the Jumbo Shrimp this season.

Brewers: RHP Freddy Peralta (2-1, 4.40) is the scheduled starter in the opener of a home series against Atlanta Monday.

Marlins: RHP Sandy Alcantara (2-2, 2.74) will start the opener of a three-game home series against Washington Monday.

TOP PHOTO: Milwaukee Brewers’ Kolten Wong (16) reacts after hitting a solo home run during the fifth inning of a baseball game against the Miami Marlins, Sunday, May 15, 2022, in Miami. (AP Photo/Lynne Sladky)