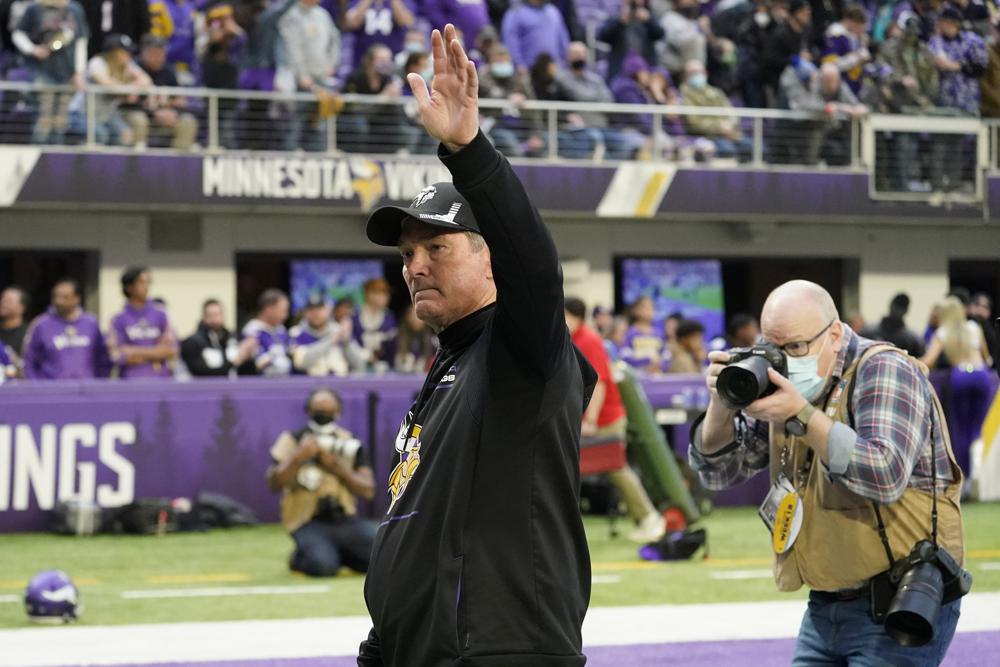 MINNEAPOLIS (AP) — The Minnesota Vikings have started fresh with a search for replacements for general manager Rick Spielman and coach Mike Zimmer after a second straight absence from the playoffs for a 61-year-old franchise still seeking its first title.

The dual firings came one day after the 45th anniversary of Minnesota’s last Super Bowl appearance, after owners Zygi Wilf and Mark Wilf met with each of the top two leaders before addressing the players at team headquarters.

“We strongly believe we need new leadership to elevate our football team. Our goal is to consistently contend and win championships,” Mark Wilf said on a virtual news conference. “There’s not just one person that’s responsible. We’re clearly disappointed in the football results this year, and over the course of the past few weeks this is something we’ve been thinking and deliberating quite a bit on.”

Zimmer went 72-56-1 in eight seasons, the third-best winning percentage in team history, plus 2-3 in the postseason. The Vikings went 15-18 over the past two years. They won the NFC North in 2015 and 2017, but in the end the state of the division was the same as at the beginning of the Zimmer era — with rival Green Bay in firm control.

Zimmer went 7-8-1 against the Packers and found as much success against three-time NFL MVP Aaron Rodgers as anyone, but the overall deterioration of the once-dominant defense he built soon after his arrival was a big part of what led to his dismissal. The Vikings gave up a league-most 146 points in the final two minutes of either half or overtime.

“I have given my heart and soul to this organization and to the players. I have had outstanding assistant coaches who have worked tirelessly,” Zimmer said in a statement released by the Vikings. “I’m sorry we didn’t get it done.”

The 65-year-old Zimmer had the seventh-longest tenure among head coaches in the NFL this season, with the 25 others in the league all hired within the past five years. The six peers ahead of him on the seniority list have all won a Super Bowl: Bill Belichick, Sean Payton, Mike Tomlin, John Harbaugh, Pete Carroll and Andy Reid.

“As an older guy, I don’t know how much longer I’m going to play. I’m excited that we’re not far away, and if we get the right people in here we could potentially take it to the next level,” said wide receiver Adam Thielen, one of three players still on the roster to suit up for the pre-Zimmer Vikings.

The Wilfs have overseen the firing of four head coaches in 17 seasons owning the club, but Zimmer finished with the third-longest tenure in Vikings history behind Bud Grant and Dennis Green. Spielman and Zimmer were both given contract extensions in 2020.

Since Spielman was hired as vice president of player personnel in 2006, the only other NFC teams that haven’t made it to a Super Bowl are Dallas, Detroit and Washington. Twelve different teams have won the conference in those 16 years, the past 10 of which Spielman had full authority over the roster as the general manager.

“It is not common in the NFL to be in a position for this long, which goes to show how this ownership group believes in stability and supports their leaders,” Spielman said in a statement distributed by the Vikings.

Spielman was responsible for firing Leslie Frazier after the 2013 season and replacing him with Zimmer, who made his name as a clever and demanding defensive coordinator for Dallas and Cincinnati before finally getting his chance to run a team in Minnesota.

The 2017 team was the apex for the Spielman-Zimmer regime, when quarterback Case Keenum produced a career season and the defense led the league in fewest yards and points allowed.

The first crack in the foundation became clear in the NFC championship game, a 38-7 loss at Philadelphia one week after the “Minneapolis Miracle.” After Keenum’s 61-yard touchdown pass to Stefon Diggs as time expired beat New Orleans in the divisional round, the Eagles were the ones who made it to the Super Bowl in Minnesota’s stadium.

Zimmer refused to cede the defensive play calling and, as Rodgers and other opponents will attest, remained one of the game’s best strategists. His straightforward and hard-nosed approach won the respect of most of his best players on defense, but his style cut both ways.

Linebacker Eric Kendricks hinted at some tension when asked about his view on an ideal team culture with the next boss.

“Just having that voice, no matter how big your role is, is important, to listen up and take each other’s feelings into account. I don’t think a fear-based organization is the way to go,” said Kendricks, who was with Zimmer for all but his first season.

Zimmer was never sold on Keenum and never meshed with current quarterback Kirk Cousins. He publicly second-guessed the offense several times, including just last week when he said after the Vikings were eliminated by a loss to the Packers that offensive coordinator Klint Kubiak should have called more running plays. Kubiak was the sixth offensive coordinator in the past six seasons.

After Blair Walsh missed a 27-yard field goal in the 2015 playoffs that would have given the Vikings a victory over Seattle, Zimmer became especially hard on kickers, too.

In 2018, the Vikings drafted kicker Daniel Carlson in the fifth round. In his second NFL game, he missed all three field goals at Green Bay, including two in overtime in a 29-29 tie. The Vikings impulsively released him the next day. When asked for an explanation, Zimmer said, “Did you see the game?”

Carlson missed just three field goals for Las Vegas this season. He sent the Raiders to the playoffs on Sunday by going 5 for 5 with the 47-yard overtime winner.

“I love coach Zim,” linebacker Anthony Barr said. “I know he’s catching a lot of heat, but players play the game, too. I think you can point the finger at us as much as you can point it at him. Somebody’s got to be the fall guy, I guess.”

Both in-house searches will begin immediately, but the general manager will be chosen first and have input into the head coach hire. Las Vegas, Jacksonville, Denver, Chicago and Miami also have vacancies for a head coach. The Bears and New York Giants need a new general manager, too.

The new regime must first figure out the quarterback situation. Cousins is coming off another productive season, but he’s carrying a pedestrian 33-29-1 record with the Vikings. He carries a $45 million salary cap hit for 2022, the final year of his deal.