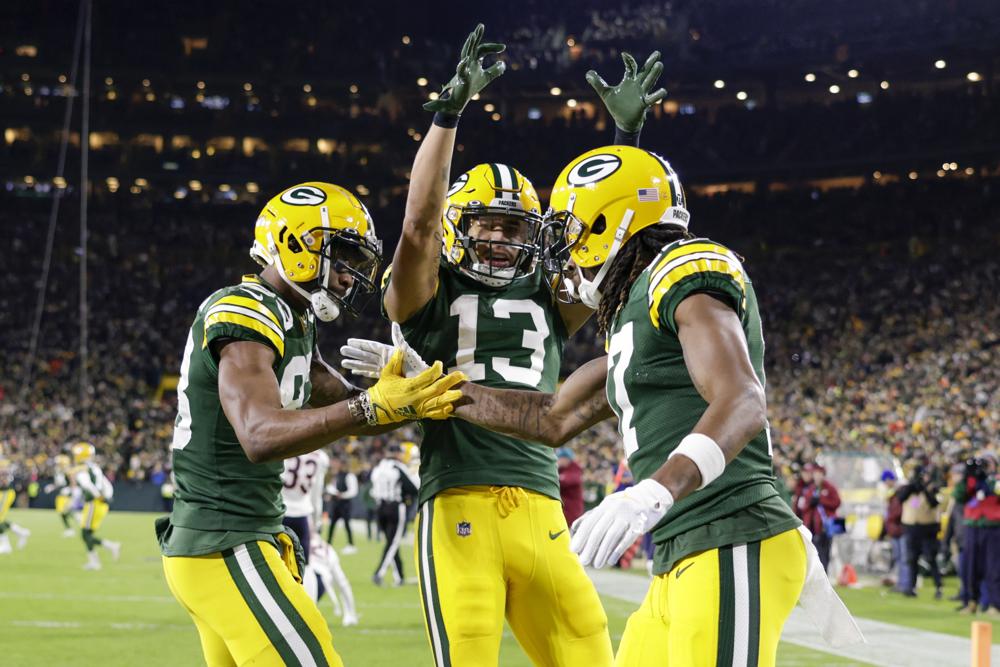 Rodgers threw for 341 yards and four touchdowns to continue his mastery of the Bears as the Packers won 45-30 on Sunday night.

The reigning MVP went 29 of 37, throwing two TD passes to Davante Adams and one each to Allen Lazard and Aaron Jones. Rodgers has 61 career touchdown passes against the Bears, the most all-time against Chicago and one more than his predecessor, Brett Favre.

The Packers trailed 27-21 at halftime but scored the first 24 points of the second half.

Green Bay (10-3) took a four-game lead over the Minnesota Vikings in the NFC North and moved closer to its third straight division title. Chicago (4-9) has lost seven of eight.

“It’s a tale of two halves,” Bears coach Matt Nagy said. “For us to be able to come out that first two quarters and do what we did, that was fun, that’s good football.”

The Packers are 23-5 against the Bears in games Rodgers had started. Rodgers yelled, “I still own you!” to the Soldier Field crowd after his fourth-quarter touchdown run in a 24-14 victory on Oct. 17.

This time, Rodgers played through a broken toe that has limited his practice time over the last month.

“It feels worse,” Rodgers said. “I don’t know what kind of setback I had tonight, but we’ll look at it tomorrow. Definitely took a step back tonight.”

This may be Rodgers’ last opportunity to experience the rivalry with his future in Green Bay uncertain beyond this season. He said he wasn’t thinking about that.

“You guys love bringing up the question of next year and stuff,” said Lazard, who appeared for his postgame Zoom session wearing an “I still own you!” T-shirt. “I think in our locker room, especially him, we don’t pay attention to that stuff. We just stay in the moment, stay focused. He’s done a great job, a tremendous job this year, of just being a leader, being resilient and exuding that calmness throughout the entire locker room.”

Chicago led after a wild second quarter that featured a combined 45 points, the fourth time since 1991 that teams have combined to score at least that many points in a quarter.

But the Bears couldn’t keep it up. Spurred by a halftime talk from Preston Smith, the Packers shut down Chicago the rest of the way. The Bears’ only second-half points came on Cairo Santos’ field goal with 1:22 left.

“P just came in yelling at us,” Packers cornerback Rasul Douglas said. “He was just like, ‘That’s (bull).’ We don’t play like that.”

Chicago’s Justin Fields went 18 of 33 for 224 yards with two touchdown passes, but he also threw two interceptions and lost a fumble. Jakeem Grant scored twice for the Bears, including a 97-yard punt return.

Jones scored a pair of touchdowns a minute apart to put the Packers ahead for good.

He capped the opening drive of the second half with a 3-yard run that gave Green Bay a 28-27 lead. On the Bears’ next series, Smith sacked Fields and forced a fumble that Rashan Gary recovered at Chicago’s 23-yard line.

On the next play, Jones caught a pass from Rodgers at about the 13 and ran into the left corner of the end zone to make it 35-27.

Chicago took a 10-0 lead in the first 20 minutes. The scoring really picked up after that as the teams combined for five touchdowns in a span of 5:18.

Douglas joined Hall of Famer Herb Adderley as the only Packers to score on interception returns in back-to-back games. Grant’s punt return was the longest for any Bears player since at least 1960, which is as far back as the team’s data on that statistic goes.

Bears: LT Jason Peters injured his ankle in the first quarter. … CB Xavier Crawford left to get evaluated for a concussion. … S DeAndre Houston-Carson went to the locker room in the third quarter with an arm injury. … DL Khyiris Tonga injured his shoulder. … LB Roquan Smith hurt his hamstring in the second half. … DL Akiem Hicks (ankle) missed a fourth straight game.

Former NFL commissioner Paul Tagliabue was honored during a halftime ceremony recognizing his induction into the Pro Football Hall of Fame.

Packers: At Baltimore on Sunday.

0
0   0
previous Antetokounmpo gets triple-double as Bucks cruise past Knicks
next Analysis: Bad teams getting blown out is a common theme
Related Posts