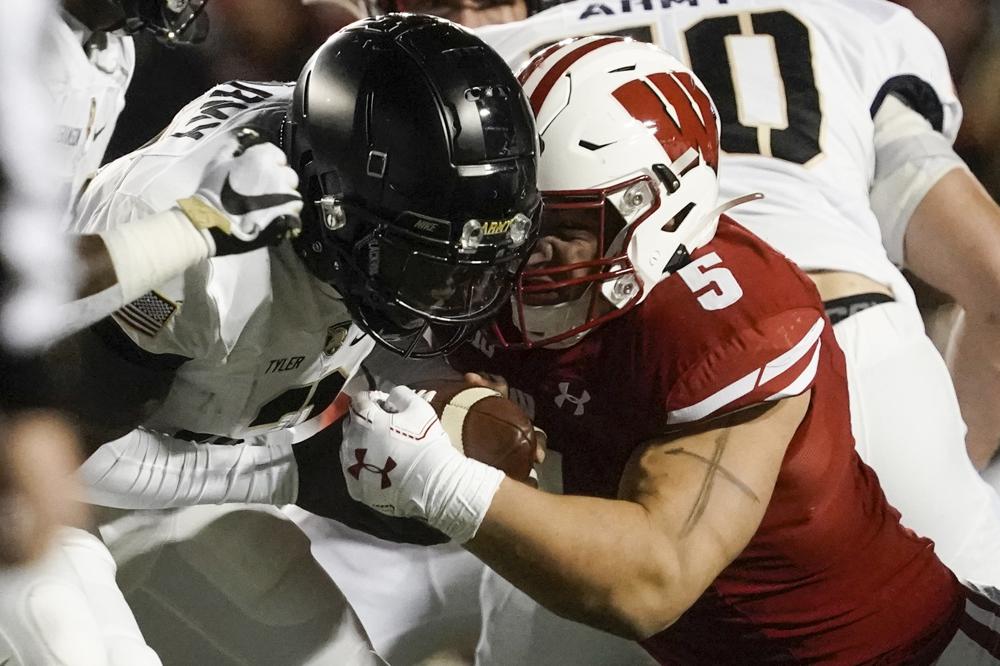 MADISON, Wis. (AP) — When you grow up in a family of 16 siblings, you do what it takes to stand out from the crowd.

That helps explain the approach that has enabled Wisconsin linebacker Leo Chenal to develop into one of college football’s most prolific tacklers.

Chenal is coming off a career-best performance against Army and leads the Badgers with 42 total tackles despite missing Wisconsin’s first two games due to a positive COVID-19 test. LSU’s Damone Clark is the only player from a Power Five conference averaging more tackles per game.

Chenal has seven half-siblings and eight full siblings ranging in age from 12 to 39. He displays the same personality on the field that often he often showcased while growing up with eight sisters and seven brothers.

Although he isn’t the oldest in his family, he may be the boldest.

“When I was a little kid, I was always trying to pick fights with them and stuff,” said Chenal, 12th-oldest in the family. “That’s where I think I got all my energy and all my passion, just being able to compete with brothers growing up, always being physical with them, starting fights and everything.”

Wisconsin fullback John Chenal agrees with his younger brother on that.

“He was kind of the guy who would get everyone riled up, whether it’s good or bad,” John Chenal said. “He’d start talking and getting loud. The next thing you know, we’re fighting.

“He has a way of getting everyone amped up and ready to go.”

That’s true whether he’s in the back yard at home in Grantsburg, Wisconsin, or in the middle of Camp Randall Stadium. Wisconsin defensive end Matt Henningsen said earlier this season that Chenal “plays a million miles per hour every play.”

Chenal made a career-high 17 tackles – 2 ½ for loss – in a 20-14 victory over Army last week. Army was trailing 13-7 and had the ball with less than three minutes left when Chenal sacked Jabari Laws and forced a fumble that teammate Keeanu Benton recovered at the Black Knights’ 1-yard line, setting up a touchdown.

“Leo makes those plays all the time, though,” safety Collin Wilder said. “That one just came to light in the biggest moment of the game.”

Chenal says he wants to live up to the “Death Row” nickname that Wisconsin’s inside linebackers have carried for years. Of course, most of them didn’t bother to write those two words on their right arm the way Chenal does before each game.

He even wrote it in multiple layers with a Sharpie because his sweat otherwise has a way of wiping it off.

“‘Death row’ is a name that the inside linebackers have had for a long time – (Jack) Cichy, T.J. Edwards, those inside linebacker greats who have passed through here,” Leo Chenal said. “It means toughness, grit, hard work, just blowing people up. It’s something you’ve got to earn, and it’s something I wear proud.”

This year, the inside linebacker tandem of Chenal and Jack Sanborn leads a defense that has helped Wisconsin bounce back from a disappointing start.

“Obviously we play well off of each other,” Sanborn said. “I Just think that we’ve played with each other so much and for so long, we just understand what each other is kind of going to do.”

The Badgers (3-3, 1-2 Big Ten) lost three of their first four games but have won two straight and maintain control of their destiny in the Big Ten West race heading into Saturday’s game at No. 25 Purdue (4-2, 2-1).

Chenal’s emergence has helped Wisconsin allow the second-fewest yards per game (225.8) of any Football Bowl Subdivision team, behind only No. 1 Georgia (207.1). The Badgers have yielded just 4.04 yards per play to rank third nationally, behind Georgia (3.55) and No. 22 San Diego State (4.03).

John Chenal deserves some of the credit for his younger brother’s success. Leo Chenal believes all those impromptu wrestling matches and tussles they had back home instilled the toughness that has made them quality football players.

“You get a little bloody sometimes,” Leo Chenal said, “but it’s helped mold who we are.”