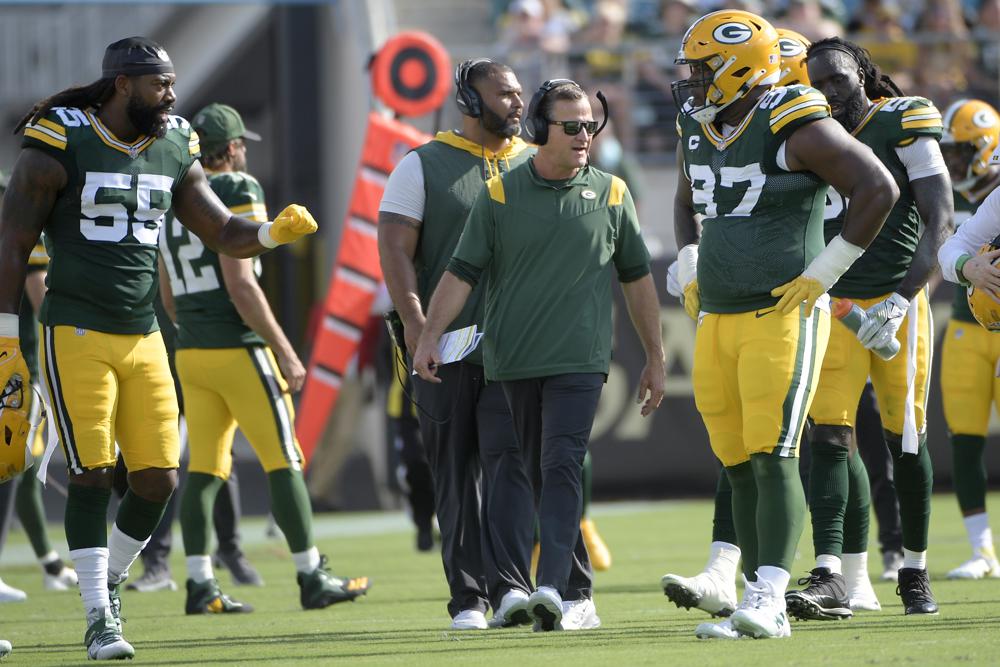 Green Bay Packers defensive coordinator Joe Barry said at his introductory news conference that the adversity he encountered in two unsuccessful stints filling the same role in Detroit and Washington made him a better coach.

It sure hasn’t taken long for him to take a few more lumps in his new job.

Barry had a miserable Packers debut as his defense allowed five touchdowns and one field goal in its first seven series of a 38-3 season-opening loss to the New Orleans Saints. That defense now must play without injured Pro Bowl outside linebacker Za’Darius Smith for its next three games, starting with Monday night’s home opener against the Detroit Lions (0-1).

“It’s a long season,” Barry said. “It’s obviously, of course, not the way that you ever want to start things, but I love this group of guys. I love the way that they’ve bounced back this week.”

To be fair, there was plenty of blame to go around for the Packers’ poor performance against the Saints. Green Bay’s offense failed to reach the end zone, and reigning MVP Aaron Rodgers threw a pair of interceptions.

But there’s plenty of reason to believe the Packers’ offense will bounce back. They scored a league-high 31.8 points per game last season. Rodgers followed up each of Green Bay’s three regular-season losses last year by throwing four touchdown passes and no interceptions the next game.

“I’ve been pretty damn good for a while, so you have a (bad) game like that, you usually bounce back to average things out,” Rodgers said.

Barry doesn’t have that kind of track record.

He previously worked as a defensive coordinator with Detroit in 2007-2008 and Washington in 2015-16. Detroit finished last in the NFL in total defense and scoring defense each of those seasons. His Washington defenses also struggled, albeit to a lesser extent.

Barry was forthright in addressing his past after Packers coach Matt LaFleur hired him to take over for Mike Pettine, who wasn’t brought back after a second consecutive NFC championship game loss. Barry said at the time that “I’m really proud of my scars” and that “I think in life, you’re hardened in life by tough experiences.”

Green Bay’s defensive players have praised Barry for his spirited approach on the practice field. They’ve stood behind him after the loss to New Orleans.

“That’s the good thing about coach Barry,” linebacker Krys Barnes said. “He’s the same guy every day. He’s always bringing the energy and it’s energy that we need. He’s always going to bring us along. He has ownership in this as well as all of us. That’s a big thing for us as a unit to take ownership in all the wrongs that we have done and continue to push forward and make our way to not make those wrongs again.”

The loss of Za’Darius Smith makes that more difficult. Smith had 13½ sacks for the Packers in 2019 and 12½ more last season. His absence leaves the Packers (0-1) without much depth at outside linebacker.

“When you lose a player like that, that’s a big deal,” Barry said. “But it is what it is. We want him to get back whenever he can, and in his absence, we’re going to have to step up and create some things, but it’s a great opportunity for a bunch of guys to be able to go show what they’ve got.”

Barry had spent the past four seasons as the Los Angeles Rams linebackers coach while helping them earn three playoff berths and reach one Super Bowl. Barry and LaFleur worked together as Rams assistants in 2017.

That experience has made Barry quite familiar with Lions quarterback Jared Goff, who was acquired from Los Angeles in a trade that sent quarterback Matthew Stafford to the Rams.

“I’ve got all the respect in the world for Jared Goff, both as a football player, as a guy, so it will definitely be weird seeing him up close in personal in a different uniform, a Lion uniform,” Barry said. “But, yeah, I think any time that you have that familiarity, especially with a player you’ve spent a lot of time with, with a previous team, there’s some little insights I’ve been able to give to our guys.”

Green Bay’s defense could use all the advantages it can get as it tries to bounce back from a humbling loss without its top pass rusher.

Barry’s ready for the challenge.

“It’s a marathon,” Barry said. “It’s not a sprint. I don’t want to diminish the fact that that was definitely not the way we want to start, but guys came back in and had a great week. … We’re on to the Detroit Lions.”

TOP PHOTO: FILE – In this Sunday, Sept. 12, 2021, file photo, Green Bay Packers defensive coordinator Joe Barry, center, works with outside linebacker Za’Darius Smith (55) and nose tackle Kenny Clark (97) during a break in the first half of an NFL football game against the New Orleans Saints, in Jacksonville, Fla. Barry said at his introductory news conference that the adversity he encountered in two unsuccessful stints filling the same role in Detroit and Washington made him a better coach. (AP Photo/Phelan M. Ebenhack, File)