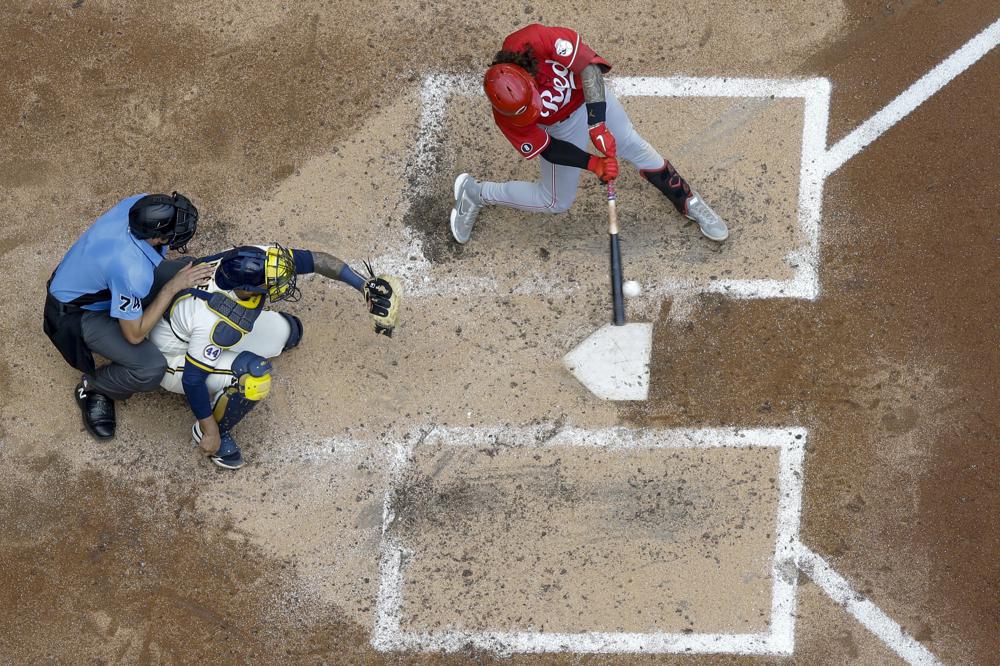 PROGRAM NOTE: Milwaukee just up the road this weekend, at Minnesota.
Game 1 of the three-game series begins Friday but will be on WIZM, beginning with pregame at 6:35 p.m. Tune in on 92.3 FM / 1410 AM

“It’s huge for us,” India said of Cincinnati’s 70th victory this season. “That’s a really good team over there so it was good to get this one and hope for the best. Hopefully they go cold and we can stay hot.”

Gray (6-6) struck out six while walking only two batters and didn’t give up his first hit until Avisail Garcia’s two-out single in the fourth. In the sixth, he loaded the bases with two outs but got Rowdy Tellez to ground out to first.

It was the second consecutive scoreless outing for Gray, who hasn’t allowed a run in his last 13 innings.

Brewers starter Brett Anderson (4-8) worked 4 2/3 innings before leaving the game with tightness in his right hip. He was charged with three runs on four hits with a pair of walks and three strikeouts.

“The last handful of starts I feel like I’ve pitched well enough to keep us in the game but also bad enough not to win the game,” Anderson said.

A leadoff single and an error by Anderson set the stage for India’s three-run homer off Hunter Strickland in the fifth. The rookie’s 17th homer this season made it 4-0. Castellanos led off the sixth with his 24th.

Luis Urias led off the seventh with his 17th homer for Milwaukee.

“It would have been a nice one to get today but they pitched well and got a big homer,” Brewers manager Craig Counsell said. “They’re a good team and they did enough today.”

India came into the game leading NL rookies in runs scored and RBIs and was third in homers and sixth in batting average, making him a strong contender for Rookie of the Year.

“That was definitely my goal at the beginning of the year,” India said. “I did say it and I definitely wanted to win Rookie of the Year, but I just want to win. I want to win for the team. I want to get to the playoffs and we’re going to make a run. That’s my goal. If it happens, it happens. My goal is to help the team win, no matter what.”

Milwaukee padded its division lead in the series against Cincinnati as it pursues what would be a franchise-record fourth straight playoff appearance.

“Any time you win a series you feel good about it — especially against the team that’s behind you,” Anderson said. “So, hopefully we can continue to play good ball on the road and we’ll see what happens.”

Reds: Tejay Antone will undergo Tommy John surgery for the second time in his career and miss the remainder of the season as well as most of 2022. The reliever announced the news on Twitter Thursday. Antone returned from a 52-game injured list stint on Tuesday but left the game after throwing five pitches and was placed on the IL again Wednesday with elbow discomfort.

Reds: The Reds’ trip shifts to South Florida Friday for the first of a three-game series against the Marlins. LHP Wade Miley (10-4, 2.88 ERA) gets the start for Cincinnati against Marlins RHP Zach Thompson (2-5, 2.97).

Brewers: The Brewers send LHP Eric Lauer (4-4, 3.59) to the mound on Friday against the Twins.