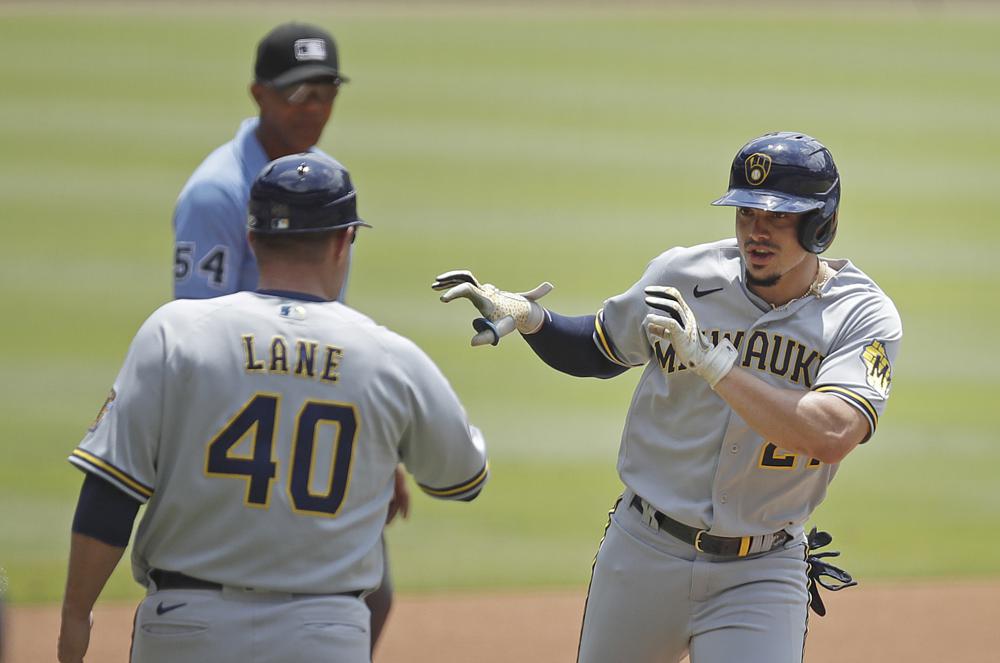 The Brewers, who have a seven-game lead in the NL Central, moved 20 games over .500 for the second time this season. They improved to 34-19 away from Milwaukee and have won 13 of 17 road series this season.

“I mean, it’s a good team,” Anderson said. “It’s a playoff-caliber team, pitching and defense are the strong suit and we’ve been scoring at a pretty good clip since the All-Star break. Still, we haven’t had everybody clicking offensively at the same time quite yet.”

Atlanta lost its ninth straight game and 12th in its last 13 when trying to reach .500. The Braves, who dropped to 52-54, are four games back in the NL East.

The Brewers went up 2-0 in the fifth when Lorenzo Cain reached on an infield single, advanced to third on Luis Urías’ single and scored on Jackie Bradley Jr.’s groundout.

Anderson, who is 2-0 with a 1.72 ERA in his last four starts, gave up four hits and one run with one walk and three strikeouts.

Anderson (4-5) didn’t have to pitch out of trouble often. Guillermo Heredia led off the Braves’ half of the third with a double and advanced to third on a groundout but was stranded. Freddie Freeman singled with one out in the fourth before Anderson struck out Austin Riley for the second time and Dansby Swanson grounded out.

Atlanta’s Ozzie Albies singled with one out in the sixth, and Anderson followed by issuing his first free pass when Jorge Soler walked. Freeman, the reigning NL MVP, lined out to end Anderson’s day, and John Curtiss gave up Austin Riley’s RBI single to make it 2-1.

“Brett was great today,” Milwaukee manager Craig Counsell said. “On a day where it was obviously very warm out there and just pitches with such great pace and he’s telling the other team to hit it and see what happens. It puts them in swing mode and kind of tantalizes them and gets ground balls and doesn’t let the ball kind of get hit in the air. We end up getting a lot of outs and it’s a fast five innings.”

Morton, who was 3-0 with a 3.00 ERA in his previous four starts, was lifted for a pinch-hitter in the sixth. Morton (10-4) allowed two runs and three hits with no walks and six strikeouts.

The Braves made it interesting against Brad Boxberger in the seventh when Kevan Smith singled and pinch-hitter Joc Pederson got hit by a pitch. Albies grounded out to end the threat.

“We were kind of a big hit away,” Atlanta manager Brian Snitker said. “We put ourselves in position and couldn’t finish the deal. It happens. That’s a really good team right there that we just played and had a chance to win a series, too. They’re riding their pitching, too. That’s a solid bullpen. Their starters are really good.”

In the Atlanta eighth against Devin Williams, Jorge Soler led off with a single before Freeman struck out, Riley singled, Swanson struck out and Adam Duvall struck out.

Josh Hader, in his first save opportunity since July 8, retired the side in order in the ninth to earn his 22nd save in 23 chances.

Hader liked how many contributions Milwaukee got in a close game.

“Absolutely, that’s what it takes,” he said. “Big guys stepping up and getting us hits and the pitching staying strong. At the end of the day, as long as we can limit the hits we give up and continue to hit the ball and play good baseball, that’s what you want.”

Brewers manager Craig Counsell said RHP Hunter Strickland and RHP Jake Cousins, both sidelined by COVID-19 symptoms, will stay in Atlanta together and quarantine at Strickland’s home nearby. … Counsell said INF-OF Jace Peterson, sidelined for contact tracing, could be activated during a three-games series against Pittsburgh that begins Monday. … 2B Kolten Wong and RF Avisail Garcia each got the day off.

Milwaukee LHP Blaine Hardy had his contract selected from Triple-A Nashville and was added to the roster to take Strickland’s spot.

Braves: Atlanta is off Monday. LHP Max Fried (7-7, 4.32) will pitch the opener of a three-game series Tuesday at St. Louis.