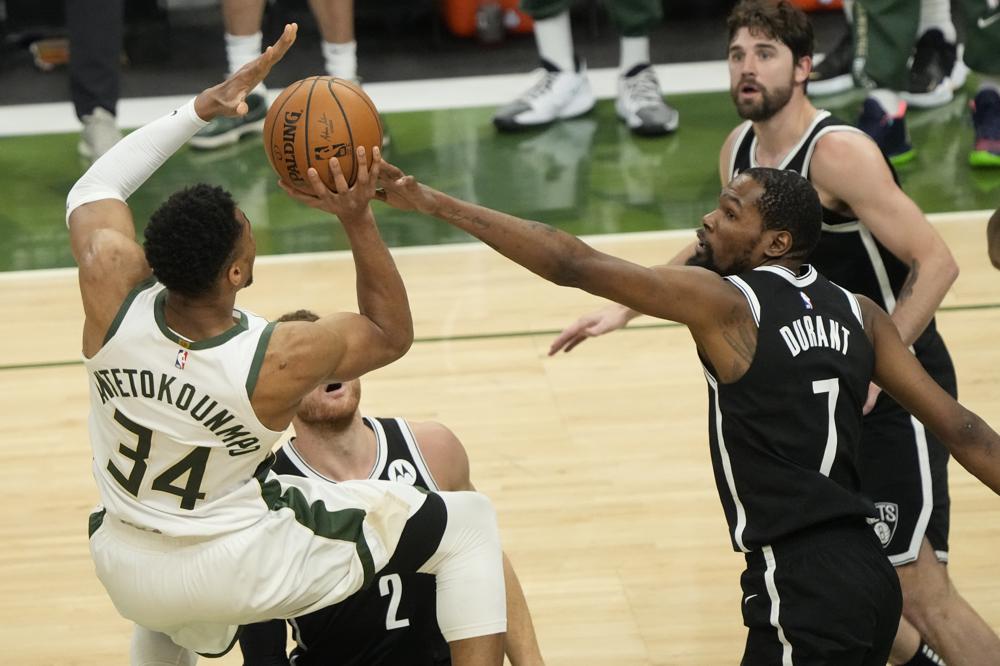 And now a second-round playoff series that once looked like a Brooklyn Nets runaway suddenly is up for grabs.

Antetokounmpo scored 34 points and the Bucks rolled to a 107-96 Game 4 victory Sunday to tie the series, while the Nets, lost Kyrie Irving to a sprained right ankle.

The Bucks erased a 2-0 deficit by winning two straight in Milwaukee. Game 5 is Tuesday night at Brooklyn.

“We’re very happy, but we’ve got to keep getting better, keep playing together and hopefully we can go into Brooklyn and take one,” Antetokounmpo said.

Brooklyn’s immediate concern is the health of its superstar trio.

Irving was hurt midway through the second quarter and didn’t return. The Nets already are missing nine-time All-Star and 2018 MVP James Harden, who hasn’t played since the opening minute of Game 1 due to right hamstring tightness.

That puts even more pressure on Durant, who has carried the Nets this series and provided 28 points and 13 rebounds Sunday. The only other Net in double figures was Irving, who had 11 points before leaving.

Nets coach Steve Nash said X-rays taken on Irving’s ankle were negative and that the seven-time All-Star’s status for Game 5 is uncertain at this point.

“We’ll have to see how it goes,” Nash said. “We’ll cross our fingers.”

After Irving made a basket in the paint to cut the Bucks’ lead to 44-40 midway through the second quarter, his left leg hit the right leg of Antetokounmpo on his way down. Irving landed awkwardly, his ankle rolled and he clutched at it as play briefly continued on the other end of the floor.

When play stopped due to a change of possession, team officials went to check on Irving, who appeared in pain on the floor before walking to the locker room. The Nets announced at halftime that Irving wouldn’t return.

The Bucks already had taken the lead for good even before Irving’s injury.

They got more balance Sunday after eking out an 86-83 victory in Game 3, when Middleton and Antetokounmpo combined for 68 points, 79% of the Bucks’ scoring output. That marked the highest percentage of a team’s points that a duo had combined to score in any NBA playoff game ever.

Middleton scored 19 points, Jrue Holiday had 14, P.J. Tucker got 13 and Bryn Forbes added 10 for the Bucks. Holiday had nine assists and Middleton had eight.

“At this stage, it’s whatever it takes to win the game,” Bucks coach Mike Budenholzer said. “It certainly helps to get more guys contributing, making shots. P.J. Tucker was phenomenal on both ends of the court.”

After the Nets scored 13 straight points to take a 34-23 lead early in the second quarter, Milwaukee responded with a 21-4 run to seize control of the game. That stretch featured a 12-0 spurt including a four-point play from Middleton, two corner 3-pointers from Tucker and a dunk from Antetokounmpo.

“They went on a run,” forward Jeff Green said, “and we just didn’t bounce back.”

As the final seconds ticked off the clock, the Fiserv Forum crowd changed, “Bucks In Six!” That’s been a rallying cry among the fan base ever since former Milwaukee guard Brandon Jennings incorrectly predicted his eighth-seeded Bucks would win a 2013 first-round series over the top-seeded Heat in six games.

“Now it’s a three-game series,” Nash said. “We’ve got to get home, rest up and get our minds and bodies ready. Stay positive.”

Nets: Green played 27 minutes and had eight points and five rebounds while playing for the first time since Game 2 of Brooklyn’s first-round series with Boston. Green had been out due to a plantar fascia strain. Green, who started 38 games this season, came off the bench Sunday.

Bucks: Milwaukee shot 16 of 47 from 3-point range Sunday after going 20 of 88 from beyond the arc in the first three games of this series. … Guard Pat Connaughton left in the third quarter with a cut near his left eye that caused him to bleed, but he later returned to the game.

About 10 minutes after the game ended, a fire alarm sounded in Fiserv Forum and everyone inside was told to evacuate the building. About 15-20 minutes later, arena employees were cleared to return to the building.

The alarm was caused by a mechanical issue in the administrative offices of the arena, but there was no fire.

Tucker’s 13-point performance came after he scored a total of nine points in the first three games of this series.

He also made a difference with the way he defended Durant. Tucker’s been the primary defender on Durant during this series.

“He’s playing extremely physical and made it difficult,” Nash said. “That’s his role. I thought it was borderline physical non-basketball at times, but that’s the playoffs. You had to adapt and adjust.”

Budenholzer had a different opinion on the way Tucker has defended Durant.

“He’s just guarding him,” Budenholzer said. “If that’s not basketball, I don’t know what is.”