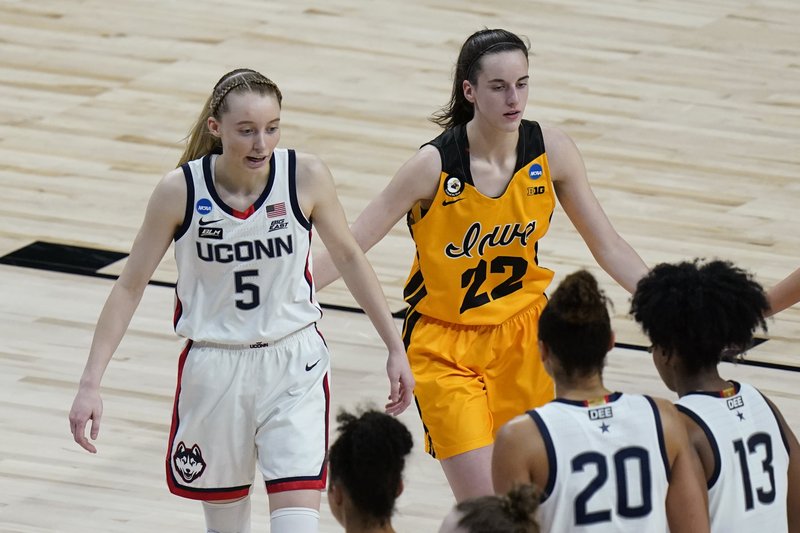 There is no one-and-done choices for female players because of the league’s longstanding eligibility rules for the draft that haven’t really been a major part of WNBA Collective Bargaining Agreement negotiations.

“I’m a believer in living in the now and right now I don’t have that choice,” said Bueckers, the UConn phenom who was honored Wednesday as the first freshman to be named The Associated Press women’s basketball player of the year. “I’m focused on college right now. In the future, I feel like that option for future college students might be there.”

The WNBA Players’ Union has thought about it.

Sue Bird, who is on the WNBA Players’ Union executive council, said earlier this week that the issue was brought up briefly in CBA negotiations with the league last year, but with so many issues to deal with, it wasn’t revisited and the current CBA runs through 2027.

WNBA Commissioner Cathy Engelbert has said since she began her tenure that it is a player’s first league and if an issue is important to players, she’d listen.

That’s good, because the conversation has begun since Bueckers and Clark would likely be high draft picks this year, maybe even 1-2, if they could declare to turn pro.

Clark, who led the NCAA in scoring this season and was second in assists, feels that the women’s players should be allowed to turn pro after their freshman year, like the men can.

“Boys have it, so why can’t the women’s game have it as well?” the Iowa freshman said. “It’s not something I’ve thought about a lot since it’s never been something for women.”

The draft eligibility rules have been in place since the start of the WNBA in 1997.

There have only been a handful of non-senior college players to enter the draft early over the last decade.

International players are allowed to enter the draft at 20 years of age, but usually they’ve been playing professionally overseas since they were teenagers.

Diana Taurasi agreed with Bird that having the option is key.

“I think the next step is to have the choice,” Taurasi said. “Will kids do it? Probably not. We should have that option. If you’re the best at your profession you should be able to get better.”

Bueckers’ good friend Jalen Suggs, the outstanding freshman point guard for top-ranked Gonzaga in the men’s NCAA Tournament, will be a top pick in the NBA draft this year if he turns pro, while Bueckers will return to Connecticut.

“Two kids from the same neighborhood, same background, same everything go to school 3,000 miles apart, Their paths are 3,000 miles different,” said UConn coach Geno Auriemma. “One will have the opportunity to be 1-2-3 pick in the NBA draft and make millions and millions of dollars. The other will be back at UConn.

“Should she have the opportunity to go, should that choice exist? If the WNBA and the players say yes, then she should. As of right now, the answer is no.”

Auriemma said he would support female players having the option to turn pro early, but acknowledged he likes that the answer is no for now.

TOP PHOTO: FILE – UConn guard Paige Bueckers (5) and Iowa guard Caitlin Clark (22) walk off the court after their college basketball game in the Sweet Sixteen round of the women’s NCAA tournament at the Alamodome in San Antonio, Saturday, March 27, 2021. (AP Photo/Eric Gay)